What a game of football that was. Perfect for the neutral, but for either set of fans, tension and nerves right up to full time. Really glad I made the trip though. It was a really enjoyable afternoon in Aichi and worries of rain being totally unfounded. Blazing sunshine throughout meant most of us went home with our first tan of the year. 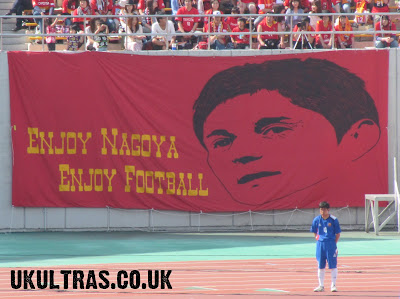 Welcome to Pixieland
The start wasn't ideal. Nagoya were the stronger out the gates, and after a period of pressure, Tsujio got beaten to a ball on the halfway line he really should have made. It was a momentary lapse in an otherwise good game for him. This error let Nagai scythe down the wing unchallenged before popping a perfectly weighted ball over for Tamada to nod in. Memories of last year's five goal capitulation started edging their way into my mind. But we responded well and were level within ten minutes.
This time it was the champions' turn to make a mess of things, with keeper Narazaki under no pressure on a backpass hitting it short enough for Genki to pounce. He stopped Genki's effort, but could only parry it to a waiting Brosque who calmly stroked home his first goal in an S-Pulse shirt. 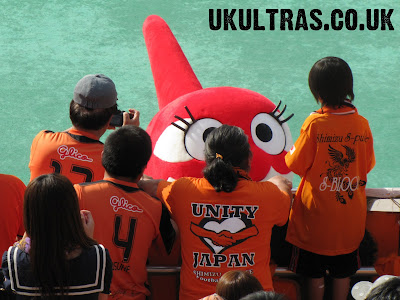 After what was possibly a nervous first 45 in his full début, Toshiyuki Takagi had a cracking second half. He was running Grampus ragged at times, and on another day might have got on the score sheet. Excellent signing he's turning out to be and I'd have him start again next week ahead of Takahara. I overhead a Nagoya fan talking to his son outside the ground after "Their number 13 is good, isn't he!" Yep, he had an excellent time of it. 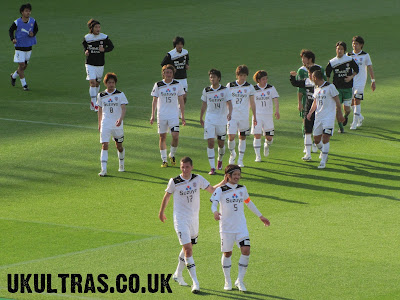 Well played, lads!
We were unlucky not to take the lead on a few occasions over the second half, the most notable being a trademark run from Genki down the right resulting in a shot off the post. Edamura was on hand but somehow couldn't get quite enough on it to put it past the defender on the line. The home team also brought a number of saves out of Kaito, and had they not been missing the taller Kennedy would have had a far greater chance of grabbing a winner.

So in summary - again without our main man Ono, but we are improving game by game. We were against an understrength Nagoya team but make no mistake, they will be there or thereabouts come December. Takagi was excellent, the crowd was small (11500 for the champions! In a city of 2.1million! In Golden Week!!!), the beer girls were friendly, it was a good game as captain for Iwashita, Kaito was solid as a rock, Toyota Stadium is bloody stunning, and the young Nagoya fan I saw bounding out of Mizuho at the end singing our "Ole, ole, ole ole!" put a smile on my face all the way back to the subway station. :) 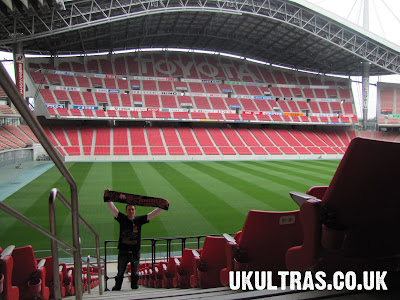 Can we play it here next time? Pleeeeeease?

Videos
A video in Chinese (maybe) with just the goals until something better shows up. Both goals come from errors, as you can see.

Sending the lads off to the changing room with a song.