Given I'm the last person in the world you could call a neutral, it may come as something of a surprise to see me start this write up with the words: what a brilliant game of football. Well, it was. I was as gutted as the everyone when Reysol got out of jail in the 93rd minute to snatch a point. I spent just as long as everybody else swearing, lamenting the amount of stoppage time, and generally saying It's not fair, which is something grown men can get away with when it's wrapped up in football terminology.

When all is said and done though, a 2-2 draw was fair. In fact when the dust settles, it is the home fans who will be disappointed. It's us S-Pulse lot who can be happy with a point on the road. If you saw the game you will have witnessed Kashiwa batter us for a lot of the first half. Statistics rarely tell the whole story, and that was true tonight. Recorded at half time as having 0 shots (amended during the ad break to 1), we were under the cosh, sure, but created a couple of very real goal scoring chances ourselves. Most memorable was Musaka working his way into the area, then skinning the defender to cut inside and get a cross in. If Bare was but two inches taller, that would have been the opener.

The home team did have the better of it though, and were not to be denied. On the stroke of half time they finally made the break through. It was a crushing blow, but no doubt woke us up to the reality of the situation. I say no doubt, because when the 2nd half started we were reborn. Overwhelming the home team after the restart, within a little over ten minutes we were in the lead. A quite remarkable turnaround.

Both goals came from Kawai's assists. The first especially impressive as he swept up left wing before swinging in a perfect cross for Muramatsu. The second after an exchange with Bare (who scored six goals away at Kashiwa in 2005 with Kofu. SIX!) let him pick out a free floating Ito Sho who headed home. The wet conditions helped see Sugeno fumble the ball into the net, but the move deserved a goal as much as Reysol's slack defending warranted punishment.

It wasn't quite a smash and grab, as we continued to threaten for some time after that, but the last 10 minutes were all Kashiwa. When they did finally equalise it was hard to begrudge them. They may have even won it after the equaliser, which would have had me incapable of writing anything whatsoever about the game, but they didn't. That's what they'll be lamenting when they've calmed down. For a game they might have had wrapped up at half time, it went begging. A stoppage time equaliser should have been, if anything, a stoppage time winner.

For that reason I'm happy with the point. I'm also happy with the way we turned it around. No mean feat at the home of the 2011 champions. We roared out the traps aafter the restart and showed real heart to get back into it. So yep, there you go. 2-2, which wouldn't have had me distraught if you'd told me this morning that's how it was going to end.

No game now for a fortnight. When we're back it's another midweek night game. Home to FC Tokyo, Wednesday 31st July at 7pm. Be there or be square!

S-Pulse in blue? At home? To clear up any confusion as to why we were in blue and not Oita, it was all to do with Mt Fuji. That famous symbol of Japan, the pride of all Shizuokans, and visible on a clear day from Nihondaira, was recently confirmed a world heritage site. Not only was Fuji itself, but so was Miho Pine Grove, the scenic coastline which borders S-Pulse's training grounds. In commemoration of Fuji San's achievement, yesterday was designated a memorial Mt Fuji game. So why did we wear out away kit? Well, Fuji itself is incorporated into shirt's design, as modelled here by Musaka: 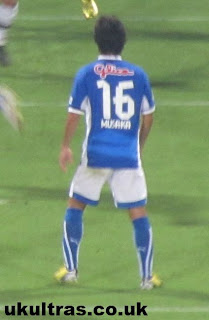 Additionally, the top of our badge is said to mimic the shape of Fuji's perfect cone, and the mountain is often seen on supporter flags and banners. Anyway, I digress. The connection to Fuji is felt strongly by the locals, and yesterday was in recognition of that sacred peak.

So onto the game. Hayashi was back in goal, and Jong-a-Pin back in defence. The former reclaimed his spot after Kushibiki was given a run between the sticks. He did just fine for the most part, but he's still so young and in what is a young team anyway, so Hayashi's experience saw him back in goal. Calla (That's Jong-a-Pin for the uninitiated) missed the midweek defeat with Kashima through suspension.

Oita came into it bottom of the table, but on the back of a mini revival. I say revival, but it was more a case of just not losing as much. They'd gained their first win and impressively held Marinos to a draw within their last four games, but after a first half where they effectively held us at bay, we ran rampant for the second.

We didn't break through until the 67th minute, and when we did it was from the unlikely source of Hiraoka. In a textbook move Yasuhiro connected with a corner at the near post. The ball rocketed past Tanno in the Oita goal. We doubled the lead ten minutes later, again, surprisingly, from our number three. Hiraoka got the faintest of touches on an in-swinging free kick and it was enough to see it home. Two in one game? I bet the couldn't believe it.

In the closing stages we put the game out of reach through Ishige's poke home, but it was a result of Bare's slicing though of the Trinita back line. He'd been unlucky not to get on the score sheet, and I was willing it as much for the goal itself as for the chance to belt out Volare (Oh, Bare!) by The Gipsy Kings some more. This has to be one of the most fun chants to sing at a football ground, period. Love it.

It was after Bare's mazy run that he played the ball over for the perfectly placed teenager to touch home. 3-0 and game over, although there was still time for former S-Pulse man Kijima to grab a consolation for the visitors. So job done against basement team Oita, who will more than likely be returning to J2 come December. With only one win from 16 it's hard to see them turning it around.

Well, the games keep on coming. Next up is away to 2011's champions Kashiwa Reysol on Wednesday. We've not had much joy up there in recent years, but Reysol have been a shadow of their championship winning selves, and sit only two places above us. We've got every chance. 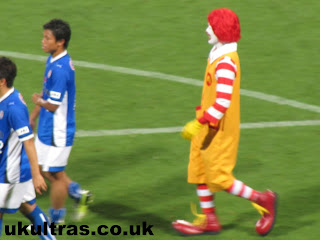 Ishige! Look out behind you!!!

Our first update in over a month! What with the prolonged J. League break, and myself being side tracked with other things, I wasn't able to write anything about the summer camp, or the second Fujieda MYFC game I went to, but we're back now. Back with a defeat, sadly. I didn't get out to Toyota city, again thanks to other commitments, but will expand as best I can later today. As per the last few weeks, I'm about to rush out the door.

So all being well, a report and videos to come later. Stay tuned!
Posted by Barry at 10:44 am No comments: