Job done. I can't really complain about the manner it was achieved, because if it was to be either 90 minutes of sexy, silky passing football and losing, or aimless, long ball hoofery and drawing, then there was no choice. As it transpired, after a bright opening minute or two we kicked off our attacking shoes, pulled up a chair, brewed a nice cup of tea, and settled back for the afternoon.

Wasting time and occasionally booting the ball forward was the major theme of proceedings. Not being able to hold on to possession was an unwelcome addition to the final 15 minutes. Knowing one Kofu goal would have relegated us, it was a painful game to endure, especially because the only team who looked like scoring wasn't us. 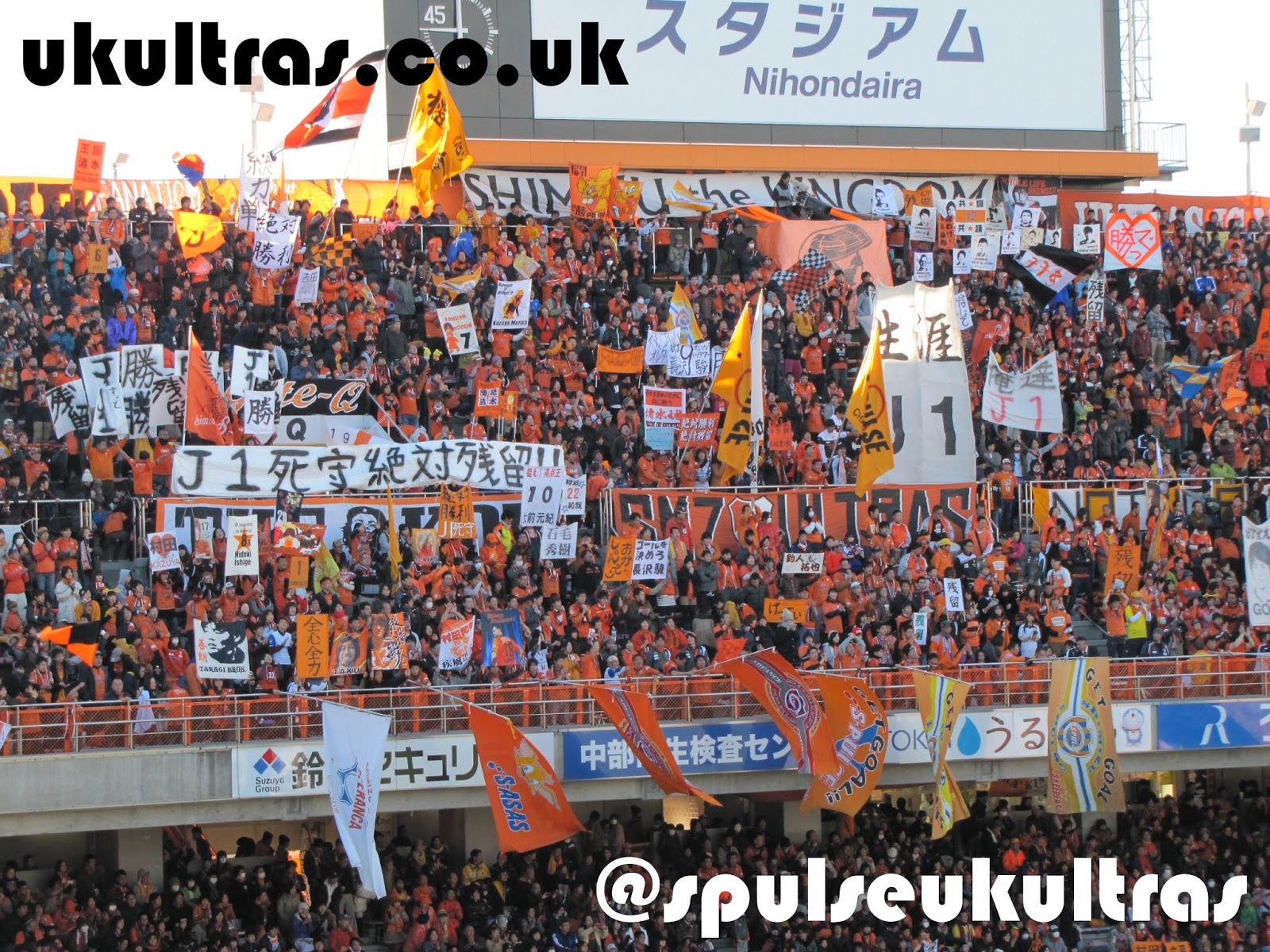 Few sights (or sounds) in J1 match a sold out Kop 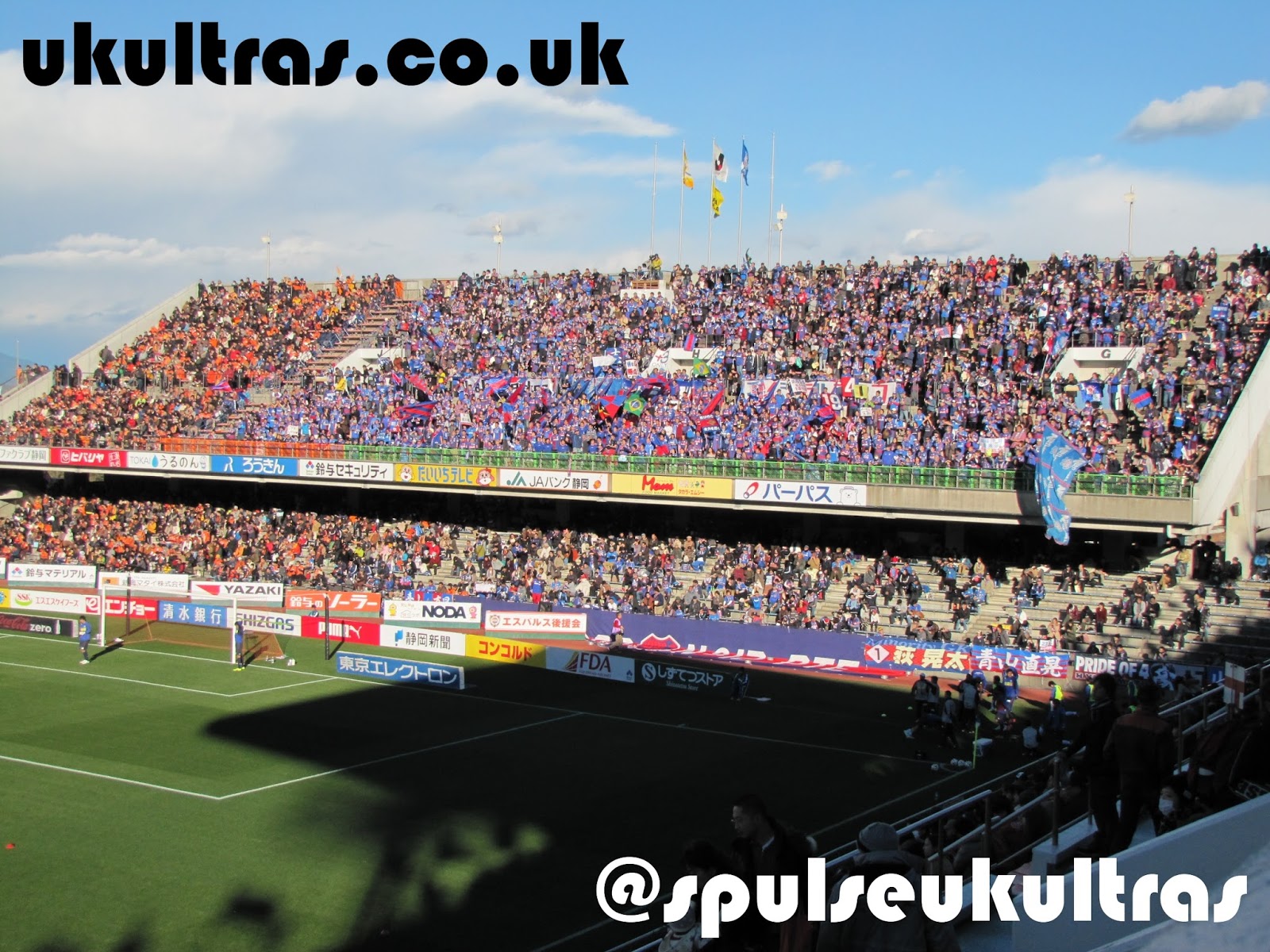 Away end half an hour before kick off Representin'
We held on, Kushibiki made a couple of crucial saves, and S-Pulse survived demotion by one point. A massive relief of course, but tinged by the fact a new manager wasn't announced immediately after the game. With the current regime in place can anyone honestly see us doing anything next season but struggling again? I can't. Oenoki didn't just have a few games to settle in. He had half a season. And we were shite. From beginning to end. A few exceptional performances kept our heads above water, but without Ogawa's late goal last week for Nagoya against Omiya we'd be down.

Well, who knows? Maybe I'll be proved wrong next year. Hell, we could end stage one bottom, stage two second, and then win the league! What's not to like?! Oh yeah, that from 2015 J1 is impossible to take seriously. Convoluted and unfair, it's becoming a parody of a football league. There's maybe a few mischievous away days to be had, but the football? Well, I guess it takes the stress out of it when you know, regardless of points earned over the year, the table is going to be manipulated and warped for the sole purpose of selling a few more tickets and sponsorship rights. Meh, it's been fun while it lasted.

So the curtain has come down on the 2014 J. League season. It's been a gas, and when I moan and whinge, it's only because I care. :) See you next season, Happy Christmas and have a great new year!


Bored? Here's the whole match (minus the first 5 minutes).

The moment we stayed up.

You Don't Know What You've Got Til It's (Almost) Gone

Shimizu are one of only a handful of J1 teams to have never been relegated. We're also one of only three of the Original 10 yet to win the championship. Technically one of two, as the F of Yokohama Flügels won J1 in both 2003 & 2004. Sure we won the league in 1999, with more points over the year than anyone else, but you know how things used to be. Two stages and all that. Iwata beat us on penalties to nullify a 16 point discrepancy in class, and they were given the trophy. Heh, ho. The dark days of multistage nonsense. Let's hope we don't see a return to that meaningless circus anytime soon... *sigh*

Anyway, I'm getting side tracked. What I mean to say it is that since 1992 we're been pretty average. That said, two domestic and one continental cup isn't to be sniffed at, and in the early years we were generally nearer the top than bottom. But speaking in terms of the big hitters over the last 22 years, S-Pulse have been also-rans more often than not.

Culturally we hold greater stock than our trophy cabinet might suggest. This a combination of the benefits of J. League founding membership, a string of unforgettable globe-covered shirts, and a strong samba supporter identity. A successfully marketed brand has little benefit on the pitch though. Just look to FC Nippon (aka Verdy Kawasaki, aka Tokyo Verdy 1969, aka 3rd worst team in J2). In a rapidly expanding pyramid nobody can afford to stand still, as former top J1 mainstays JEF United and Jubilo Iwata will join Verdy in testifying. Lose your foothold and there are plenty ready to step in.

And it's there we now stand: on the edge. If we go over and surrender our top flight berth there's no guarantee of regaining it. Before you know it you've joined that list of "Oh yeah, didn't they used to be in J1?" teams. A spectacularly misjudged mid-season firing, followed by an equally mystifying appointment, sent an otherwise mid-table season into free fall. Now isn't the time to delve into the whys and hows that led us here. I've already done that to death. Though our fans are already painfully aware, and you can well argue it goes without saying, the importance of tomorrow cannot be overstated.

It's taken an all-or-nothing final game to give us our first sell out of the season. A mediocre S-Pulse has brought in a 14000 average, the 5th lowest in J1. With that in mind, how many would you expect to turn out for a Wednesday night against Nagasaki? It's no exaggeration to say Nihondaira's location and access work against everything the club tries to attract fans, but that's another argument for another day. The bottom line is J2 football would see thousands finding other things to do.

What of the team? I'd postulate demotion would see (including but not restricted to) Jakovic, Honda, Omae, Takagi T, Novakovic and Jong-a-Pin out the door faster than you say "You can't win anything with (the) kids (team manager)". None of them should settle for J2 football, and whether they have national team ambitions or not, they'd be wasted in the second tier. Before I pipe up with the apparently logical extension that our team is therefore Too good go down, I'll instead wheel out the equally hackneyed but infinitely more accurate The table doesn't lie. Should we drop, we'd begin J2 with an even younger squad than we have now, and fewer experienced heads to lead the way back.

Unlike other high profile relegations, we're not a club faltering under the weight of ageing "stars" stunting the development of the new generation. Anything but. We've just been hopelessly (mis)managed since the summer, with a defensive constitution that makes a sieve look watertight. The second half of this season has been a disaster, but a combination of Cerezo imploding in a pink cloud of incompetence, and Omiya having an even worse time than us (so far), has let us off the hook. Another year and we'd already be down.

Here we are. One point from safety. One defeat from J2. It's entirely down to us. Being this close gives you a genuine appreciation of visiting the Kashimas, Marinos' and Urawas of this world each week. What fan is willing to trade that for (admittedly quite appealing) trips to Kanazawa, Fukuoka and Ehime? Nobody. And who wants to be welcoming handfuls of visiting supporters every other week rather than thousands? Again, nobody.

So while it's screamingly obvious that survival means everything for the immediate future of this club, whatever happens tomorrow there has to be major changes before 2015. Let's have them happen knowing we will be kicking off in March where Shizuoka City needs us to be: in J1.