Stuart Atwell. Remember that name if you don't already know it. He's the referee who single handedly tore the heart and soul out of this game. In a match with not one memorably dirty tackle to speak of, the 27 year old Englishman dished out card after card after card after card. Ten, count 'em, TEN yellow cards.

This is the fellow who is the subject of an article titled: Is Atwell the Worst Referee in the History of the Premier League? and is the chap with a list of "controversies" (a polite way of saying "King Kong sized fuck ups") as long as your arm. And let's be clear: today was no fluke - he showed eight yellows in his last J. League match. He's in the country under an FA / JFA exchange program, and the sooner his three weeks are up, the better for everyone. I can't believe anyone is benefiting from this arrangement (apart from the FA, who have got shot of him for a month). 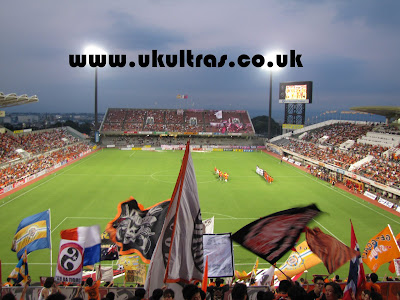 Kick off
It's a shame when a report must start with two paragraphs of moaning about the referee, so I'll leave it there. As for the game, watching Cerezo's swift, tricky passing game, their off the ball movement and deadly final ball into the box, it's no surprise they have won four of their last five, including a 5-0 away demolition of Hiroshima and a 2-1 defeat of Kashima. We could have been 2-0 down by the time we were 1-0 up. 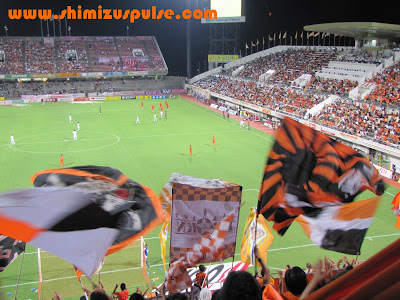 Goooooooooal!
At 2-0 down their game started coming apart I felt, but were still causing problems right up to the end. Their two goals came from free kicks on the edge of the area. After 85 minutes of Mr Atwell playing the most infuriating pedant you can imagine, the players clearly realised they could flop to the ground at any slight contact with a high chance of being rewarded with a free kick. And so flop the players did with predictable results. The two late goals took the sheen off the result, but in a game torn to shreds by the goon in black, I'm just happy that 1) we won, and 2) noone got sent off. 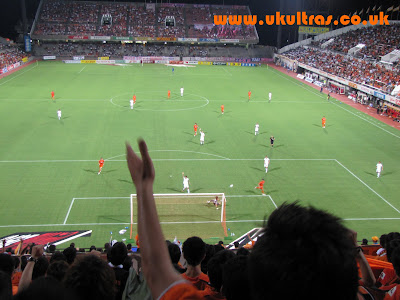 We went close to making it four several times
I'll write a little more tomorrow, but I gotta get some kip - work on the morrow!

THURSDAY EDIT: I never got to write more about this, so I'll hand over to Matsu at The Rising Sun with his report. Click here.

I didn't watch this, instead going to a huge fireworks festival, and it looks like I missed a cracker.

There you have it, folks. The first ever no score draw in a league Shizuoka Derby. It took 17 years and 40 games to come, but come it did. It takes our unbeaten run at home against iwata to seven years.

The game was sold out and the place was rocking.

Not S-Pulse related, but here's a video of a game this weekend with goals. Gamba Osaka beating Urawa after Urawa had equalised in the 93rd minute. Brilliant stuff.

Okazaki to Plymouth is Bollocks (Unsurprisingly)

According to a poster on a Plymouth Argyle fans forum, the proposed bid for Okazaki is rubbish. From the mouth of the Pilgrims' manager himself, it's not going to happen.

Kinda nice that Okachan's name is being bandied about abroad, though. When a serious bid from a team worth considering comes in I'll be the first to wish him all the best, but first things first: the 2010 J. League championship. :)
Posted by Barry at 10:55 pm 2 comments:

Over in Yokohama, S-Pulse's satellite team played Marinos' equivalent today. Two games were played, the first ending 1-0 to the home team, the second 5-1 to us.

The satellite line up differs from regular J. League in that it's a mixture of first teamers and reserves with unlimited substitutions available. Over the first 90 minutes 14 different players took to the field, and in the second game we tried out 18 different players.

Our goals came from:

Great to see both new singing Ito getting on the score sheet, and Okazaki showing he's raring to go after his World Cup adventure. Click here for full line ups (in Japanese). Speaking of Okachan:

Plymouth Argyle - Are You High?

It was reported on Suponichi via the Daily Mail that Plymouth Argyle hope to sign our Okazaki.

Yes, that's Plymouth Argyle, currently in the third tier of English football alongside the likes of Exeter City and Walsall. And, yes, that's Okazaki, the Japanese international who just held his own in the World Cup against the best Dutch, Danish and Paraguayan defenders, and who was the highest scorer in international football in 2009.

It remains to be seen if Okachan, who has stated in the past his hope to move abroad one day, will be enticed by the prospect of playing in front of 5000 people away at Carlisle, or, even better, 2500 at Dagenham and Redbridge.

Seriously, Shinji - you're playing at a higher level than England's third division already. Much like Jubilo's Robert Cullen snubbed Plymouth last year, don't even think about it. I've nothing personal against the Pilgrims, (I'd say the same thing if my beloved Albion made a bid), but for an international striker hitting the peak of his career, a move to England has to be at least to Championship level.
Posted by Barry at 11:17 pm No comments: