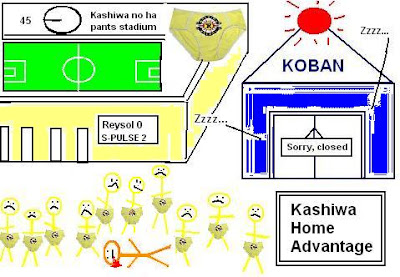 Hey, you won!
Hooliganism in the J. League? You've got to hand it to Kashiwa Reysol fans; attacking en masse a lone S-Pulse scarfer, beating him to the ground and knocking seven shades of shit out of him - they give the word scum new meaning. Makes you wonder why they stop at scarfers? There are plenty of kids who go to games - and girls too! Even easier targets than a 22 year old bloke on his way back to the station. Nobody's naive enough to think hooliganism doesn't exist. Even in Japan it's part of the game to small degree - but Jesus, Kashiwa - wait till you play Antlers or Urawa, start attacking their most vulnerable fans and see how far you get. Got a funny feeling that's not something I'll ever be reading about... It would also have been nice if the local police hadn't been as use as a chocolate teapot. Shame on you Kashiwa "police" - you proved yourself to be worthless.
Posted by Barry at 9:47 pm No comments:

Can we play in Chiba every week?

Two trips north of Tokyo this season have reaped four goals for, none against, and six points on the board. Are there no other games we have to go to Chiba for this year? I could very easily get used to watching Okazaki slam in winners against yellow opponents. Unlike against JEF, today's opener came not from soon-to-be-recalled-to-the-national-team Fujimoto, but S-Pa's Brazilian dynamo Fernandinho. A long cross/pass swung in from the side he smashed first time into the bottom corner sending the orange ranks behind the goal (and the hundred watching in Dream House, Shimizu) into raptures. Ferny is a crucial part of the S-Pulse machine, and he proved it yet again today. With Kenta still working out his best starting forward line, Ferny's playmaking just behind the front two and his eye for goal is more important than ever. 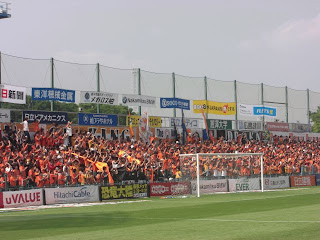 Pic courtesy of our man in with the home fans, Tats

Today we started with Yajima and Hara leading the charge. I'd not seen a great of Hara before today, but he looked hungry and not afraid to get stuck in. He was taken off for Okazaki just past the hour, but with his last touch he very nearly doubled our lead. A sweetly struck effort on the edge of the area smashed back off the cross bar and out of danger. Hara off, Okachan on, and it was only eight minutes we had to wait for the second goal. It had long been coming - nine S-Pa corners against the home team's two tells it's own story, and it was from a corner that Okazaki got down low to head it home. Cue more sideways conga dancing on the terraces. :)

The horrendous start to the season is still fresh in the memory, making every goal and every win that much sweeter. Up to 12th, a win on Saturday would take us into the top half, and would leave me smiling for the whole of May. Derby preview coming up later in the week - stay tuned! S-Pulse are back in form, firing in the goals and ready to rock and roll to a Kings of Shizuoka title on Sat!

In other news, Reds made hard work of beating Consdore, needing to put in four to kill off Sapporo who scored twice themselves. Nagoya's awesome start continued to falter with another defeat, this time home to Kawasaki. Other than that, find it out yourself - what am I to you people, a news service? ;-D
Posted by Barry at 8:57 pm No comments: 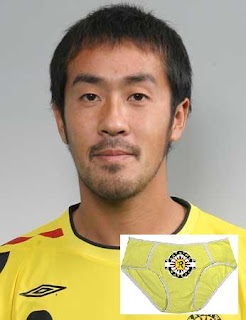 Before we can fully concentrate on the Derby this Satdi, there's the minor distraction on Tuesday of a trip to Chiba. I've thus far only ever ventured into Chiba Land for airports, summer music festivals and Disney fun. This won't change tomorrow, sadly, with plans already long in place to spend the national holiday doing non-football related stuff. Real life, eh? Who needs it? The game will be taken in at S-Pulse's own mini-cinema, Dream House in Shimizu. Here's hoping we can dream up our second Chiba prefecture away win of the season!

Most regrettable is missing out on the chance to throw womens pants onto the pitch as the Yellows emerge from the tunnel. If ever a team deserved stick, if ever there was a perfect reason to rip on a club, having one of your star players arrested for stealing women's knickers is near perfection. Lets hope the traveling masses find a way to remind Reysol they'd been harbouring a known knicker-nabber. :) His defence so far? "It was seven years ago. I can't remember doing it." Maybe S. Hussein should have tried that one when tried for war crimes committed back in the 90s: "Yeah, that was like ages ago. I can't remember doing it, so you're probably best off just letting me go and that." :-D

Meanwhile, ticket news for the main event this Satdi:

For those of you who don't read Japanese, it basically says if you don't have your ticket but plan on going, vast sections are already sold out, so get your arse into gear. S-Pulse have again wisely chosen to stage the game at Nihondaira, with another rip-roaring atmosphere guaranteed much like last year. Gates open at 1pm for the one game we simply cannot afford to lose. Get there early. Get wasted in the sunshine. Get lairy at the ref. Get the J****o fans riled by signing their victory song as we beat them. And get happy after a third derby win on the spin making the The Kop bounce around with more sideways victory conga dancing. :)
Posted by Barry at 9:48 am 1 comment: 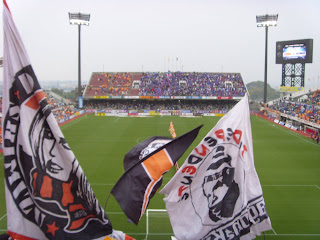 It was a while coming! After such an indifferent start to the season, while the fact that boos rang around Nihondaira after defeat by Nagoya came as little surprise, the voracity and anger of the jeering did. The fans' point was made, and it clearly impacted on the team. Undefeated in three, things are looking more promising going into the biggest game of the season so far: the Shizuoka Derby. The 5-0 demolition of Verdy was "only" in the League Cup with both teams fielding weakened teams, but the impact on the confidence of the team was obvious. Away at Marinos and home to FC Tokyo, S-Pa came out swinging and looked a whole lot more threatening going forward than they have so far.

The game on Saturday was split down the middle - nine corners in the first half, and none in the second half for S-Pa. The near-opposite was true for Tokyo, who had S-Pulse on the racks for long periods after the break. Any goodwill I had towards accepting 'fair' results has already been tested to the limit this year, so I was more than happy to see us cling onto our 1-0 lead to the end of stoppage time. S-Pa could have taken an early lead with a move which scythed through the Tokyo team and ended in Fujimoto bringing fine save out of the keeper. At the same end in the second half, a wayward penalty area clearance very nearly found the net to level the score. This was after our ninth corner of the game had born fruit in the form of an Aoyama headed goal. The defender rose above all others to head it into the ground. The speed of the bounce foxed the keeper as it bounced up and through his hands. Deep into first half stoppage time: 1-0 S-Pa. It was an open game with several chances for each team, but only one stuck the ball in the net, and that's what it's all about!

A few thoughts on the day: 1pm kick offs don't do anyone any favours. Great traveling support from Tokyo again, although they don't make nearly as much noise as they could, given their numbers. Our season start was pretty awful, but for a missed stoppage time pen we'd be two more points better off, and three of our four defeats were against early high flyers Reds, Gamba and Nagoya, which were always going to be tough.

We're gearing up nicely to take Jubilo to pieces on Saturday in front of a packed 'Daira - a third straight derby win please! Before that, it's Reysol away on Tuesday which is never an easy place to go to. The UK Ultras founder members won't be in attendance, although several of the extended Ultras family will be BDOing it to Kashiwa to fly the flag for Shimizu. Three points would be awesome, thanks very much!
Posted by Barry at 8:50 pm No comments: