Aussie striker Alex Brosque looks set to become an S-Pulse player after an arbitration committee ruled in his favour today. As I understand it, Brosque had a buy out clause in his contract, but not in his newly signed one, due to come into effect April 1st. However, Sydney FC insisted the new contract's terms to be in effect already, a claim thrown out by the arbiter.

This clears the way for the big man to join his countryman Bosnar at Nihondaira for the new season.

It's that time of year again! New arrivals, photo ops, players in drag - the annual Supporter Thanks Day took place at the sprawling Twin Messe exhibition centre this afternoon. As much as all the various things to do, it was a chance to bump into all those faces behind the goal I'd not seen for a while. The season can't start soon enough!

Just shy of 6000 people turned out for a classic afternoon of S-Pulse related fun and occasional sillyness. I'm tired after another late one watching Japan claim the crown of Asian Kings, so I'll let the pictures do the talking. To have a look at 2009 and 2010's Thanks Days just click. 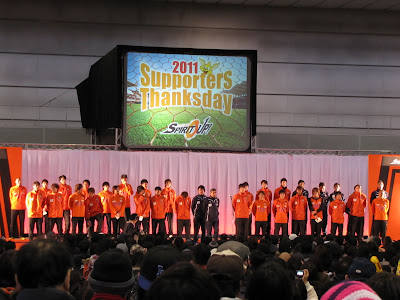 What it was all about 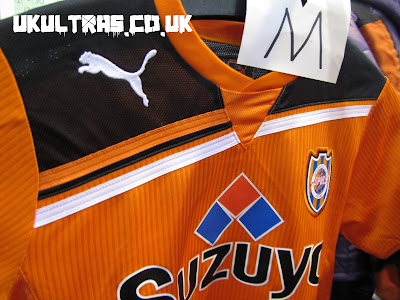 That new kit up close 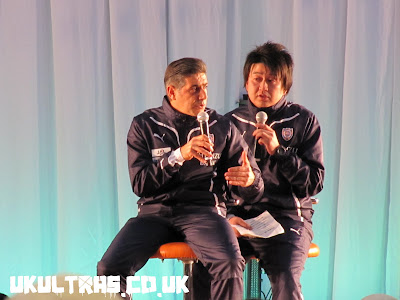 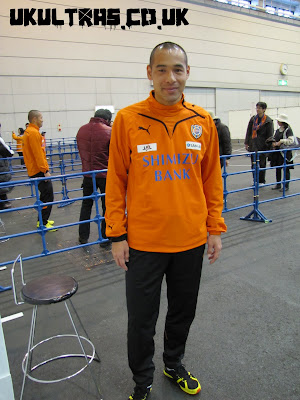 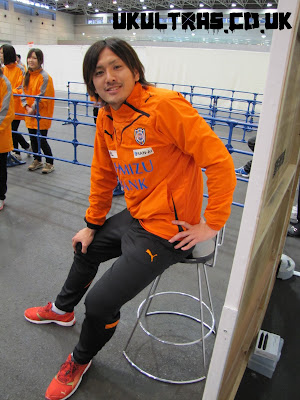 Iwashita struck up conversation with me :) 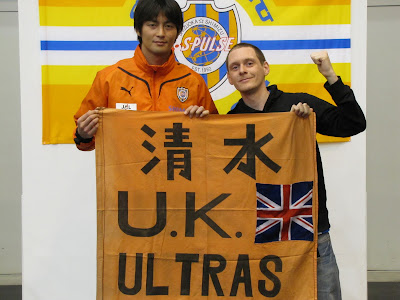 I drew Nagai for my photo 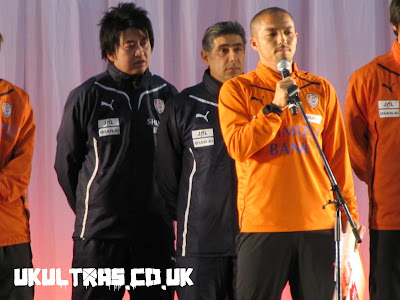 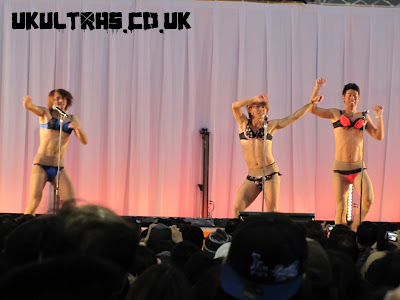 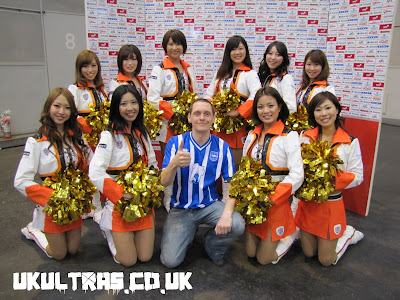 New manager Afshin Ghotbi arrived in Japan yesterday and visited his new club for the first time. Click here for a full interview (in Japanese). Slightly brilliant is the picture bottom right (click here to see it).

Our new boss is holding a framed picture (or maybe it's an iPad?) which clearly includes the panorama I knocked up (badly) on Paint a couple of years ago and shared with the world via Wikipedia. Click here to check out the original.

Welcome to Shimizu, Mr Ghotbi - I'm sure you're gonna do great.
Posted by Barry at 6:57 pm 1 comment:

S-Pulse are in talks with Sydney FC over the signing of their top scorer Alex Brosque. Interesting news, but perhaps even more interesting is the fact we're described as J. League heavyweights. First time I've heard us called that, but has a certain ring to it.

The first pictures of the new kit for 2011 were released today. Click here, here and here to see it. I'll be sure to grab a few close-ups at the Thanks Day event on the 30th.

My verdict? Bit more interesting than recent years, but until we go back to the world map style for which we're famed, we're only treading water... 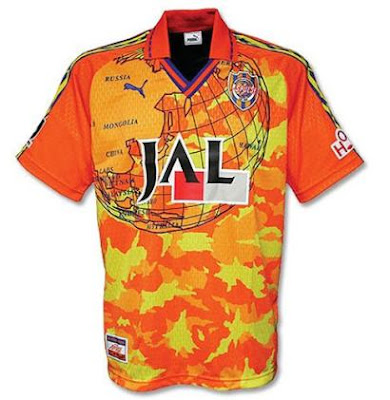 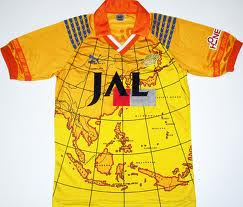 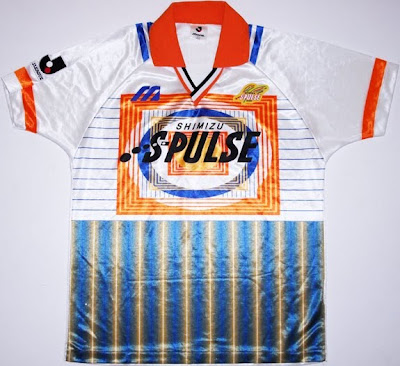 Time for Edamura to step up.
Posted by Barry at 7:55 pm 4 comments:

A pre-season match with Yokohama F. Marinos was announced today. The game will take place on Sunday, February 20th. Kick off at 2pm. There'll be a satellite training match before the main event.

The game won't be held at Nihondaira, instead S-Pulse are choosing to spread the love to the east side of the prefecture. The game will be at the Ashitaka Athletics Park in Numazu.
Posted by Barry at 9:38 pm No comments:

The opening two weeks fixtures were announced this evening.

So Hyodo gets to face the club he turned his back on early on. The full fixture list is known to clubs and individual fixtures are leaking out, but the official release is due February 2nd (a fortnight tomorrow). I'll be hammering away at my keyboard to bring you all the fixtures as soon as they're out.
Posted by Barry at 6:45 pm 1 comment:

Who is the J. league's Most Successful Club? 2010 Update

Yes, we're all bored stiff of the closed season and waiting for the fixtures to come out, so in the mean time, here's a follow-up of my post two years back. The original post was inspired, as the subtitle "Debunking the Urawa Myth" suggests, by a stunningly inaccurate soundbite by Daily Yomiuri journalist Shintaro Kano.

Mercifully, his piece, in which he stated the Saitama Reds to be the most successful team in the J. League, has since been removed from the Yomiuri pages it blighted. But in it's wake it left my article and the points system I contrived as a gauge to success in Japanese club football.

Two years have passed since then, so it's time for an update to include 09 and 10's trophy distribution. As before, the system is as follows:

Continental cups are counted, but show-piece super cups aren't. So without further ado, here's the rankings of the top performing clubs since the professionalisation of the game in 1992:

After this, we're into the realm of one-time cup winners, as per Oita Trinita.

So the biggest change, apart from Kashima extending their already substantial lead at the top, is the jump of Nagoya to 9 points from 5.5 following their league win and Emperor's cup silver medal.

S-Pulse sneak an extra .5 after yet another cup final failure, and Gamba Osaka continue their accumulation of points to make up ground on the historic powerhouses of Iwata and Verdy. Of the current top ten, I'd reckon no more than four are likely to win the league title any time soon, so give it a few years and some of the former big guns may finally be challenged.

It's probably not even worth mentioning, but Japan's "most successful club" neither managed a top two finish or made any cup finals in the last two years (nor did they in 2008).

Purely in terms of titles won, the top five teams read as follows:

So there you have it. Kashima Antlers still head, shoulders, and most other body parts ahead of the rest. I can only imagine how much fun their fans have had over the years. The legacy of Verdy still casts a big shadow over most teams, and Yokohama's glory years were such that few others can yet match them. Jubilo Iwata, to the chagrin of all right thinking people, are still at the higher reaches of both tables. Credit where it's due, they've won a shit load of stuff in the past. They're still scum though, obviously.

Be sure to tune back in next year to see how the slowest league table in football progresses!
Posted by Barry at 10:27 pm No comments:

Ghotbi Watch - Iran Through to 1/4 Finals

New boss Afshin Ghotbi maintained his Iran team's 100% record at the 2011 Asian Cup with a 1-0 defeat of North Korea. This makes Ghotbi's team the first to progress to the knock out stages. They have secured the group top spot with one game still remaining.

The goal that put them through:

Japan are also looking good for progression, where a draw against the already eliminated Saudi Arabia will be enough to see them through.
Posted by Barry at 11:48 am No comments:

One of the stars of the just-finished all Japan high school football tournament, Hiroki Higuchi, will join S-Pulse after graduation. The winner of this year's top scorer award is set to take over the number 23 shirt from Okazaki, a graduate of the same high school.

Welcome to Shizuoka, fella. Can't wait to see you in action!
Posted by Barry at 9:52 pm No comments:

Hara / Hyodo / Fujimoto desert the club that made them

Finally I can bring myself to watch.

But probably a lot more interesting is this great digest video YouTube user Jooomaru made of the Kenta years. So many memories. :)

Something happened on New Year's Day which left me incapable of very much at all, so it's a bit late, but may I wish each and everyone of our readers a very happy new year! All the best for 2011 and thank you for reading!

It's going to be a whole new set up at Nihondaira in 2011, but I have faith in the changes and confidence for the future. There'll be plenty of kachilocos to come next season!

Speaking of changes, today came the official announcement of the capture of Fuji lad, Daigo Kobayashi. Kobayashi, who went to the same high school as Shinji Ono, has been playing in Europe since 2009. He netted 8 times in 29 appearances in the Norwegian Premier League while playing for Stabæk.

Kobayashi joins fellow Shizuoka boys Ono, Takahara, Kaito, Muramatsu, Edamura and Masaki in a team which will have an orange heart and soul reminiscent of the old days where nearly everyone was from Shiz. This is a good thing and something to be proud of. :)

Satellite team coach since 2006, and Kenta's right hand man, Kazuaki Tasaka will be taking over as the manager of 2008's cup nemesis Oita Trinita for the new season. Best of luck to him down south.
Posted by Barry at 8:25 pm 5 comments:

Not up to writing anything yet. Maybe Monday. Absolutely cracking day out in the sun, though. Only two teams get to do it on New Year's Day, and regardless of the result, it was an away day to top any other. 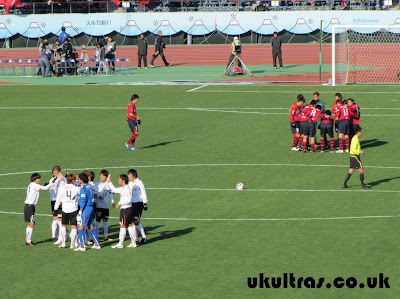 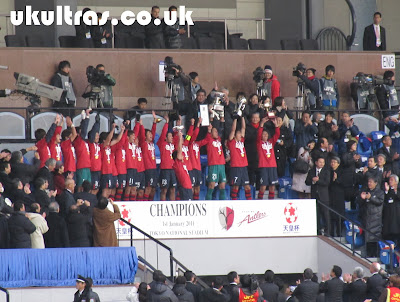 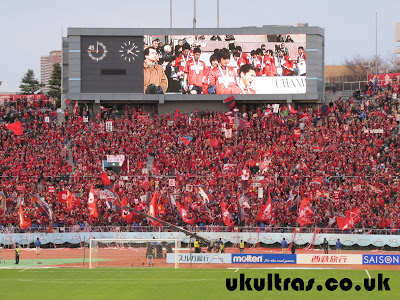 Do they ever get bored? You know, of winning all the bloody time? 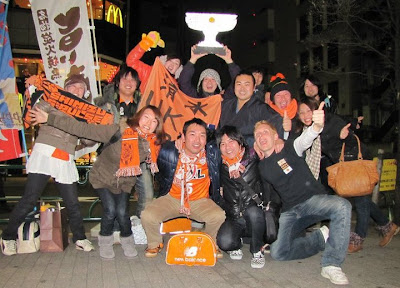 Why let a small detail like the result get in the way of a stunning away day :)
Videos