S-Pulse are off in Gotemba (minus Okazaki who is busy firing Japan into the last 16 in South Africa) for their mid-season camp and I, like the rest of you, am existing on a substantial and enduring lack of sleep. The eight hour time difference, and the resulting sleep deprivation incurred when watching games live, means this website is very much in World Cup hibernation mode.

However, in the preceding fortnight it was announced that a new addition to the Orange Machine is 21 year old Sho Ito from French team Grenoble Foot 38. The former under 20 national team member is the first Japanese player to have gone straight to Europe from high school, and counts Arsenal manger Arsene Wenger amongst his fans.

I'm looking forward to seeing some of the 184cm striker in action.
Posted by Barry at 12:05 am 1 comment:

And with that display of sheer bloody mindedness, Urawa (who were already out of the competition), gleefully dragged their old rivals down with them. The Saitama reds knew they had more to play for then just their pride - there was of course the chance to royally screw over a bitter enemy.

And screw them over they did, doggedly defending, rushing them on the counter attack, and wasting time at every opportunity until the ref finally blew his whistle deep into the 95th minute. A single goal would have put Yokohama through to the knock out stage at our expense, but Urawa made it their mission to see it didn't happen.

So all that works out just dandy for us, as the group B final standings look a little like this:

Iwata's impotence in front of goal clearly came to a head at the Yamaha Stadium tonight, as they released Sunday's frustrations all over Yamagata's face in a veritable ejaculation of goals. A 5-0 win for the sky blues (their largest victory for roughly 152 years) sent the visitors out. Given all they needed was a draw to progress, any Mountain Kings who made the journey to iwata tonight will have just cause to be a little peeved at their team's capitulation.

So the next round of fixtures lines up thusly:

These games happen to fall when I'm back in England for a week, so it pains me to report I'll be missing my first home game of the season. That said, I'll be there for the semi final first leg against either Hiroshima or G. Osaka on September 29th should we make it. The return leg on October 10th I may or may not treat myself to (it's the day before my birthday after all!).
Posted by Barry at 8:54 pm No comments: 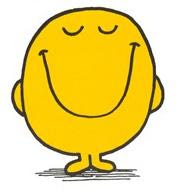 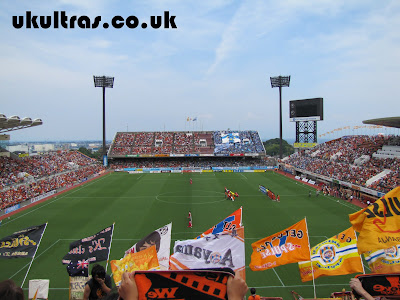 Perfect day for a derby win
We comfortably beat Iwata at a packed Nihondaira Stadium to extend our run of unbeaten home fixtures against Jubilo into it's eighth year. The win leaves the Nabisco Cup group B looking like this:


So all we need to hope on Wednesday is that Yokohama don't win. In that case anything can happen in the Iwata v Yamagata game. If Yokohama win, then we'd need the Iwata game to end in a draw to progress. (Not entirely true - see comments.)

As for today, we were the better team; sharper and quicker to the punch than the visitors who, despite getting far enough forward on a number of occasions to shoot, they wouldn't have hit the target if they were still playing now. 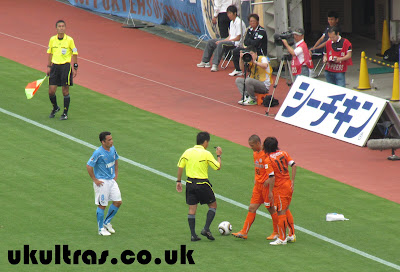 The freekick we extended our lead from
Both our goals came from the height of Bosnar and Johnsen creating havoc in the Jubilo penalty area. Johnsen, who admittedly didn't have a great game, was still the main reason we took the lead shortly before the break. A nicely weighted freekick floated in by Ono (who was effortlessly world class again. Okada's unfathomable decision to exclude him from the national team is our gain) was met by the towering Frode. He nodded it into the danger zone, and after another flick on, it was met by Nagai. 1-0.

In the second half it was another freekick which was met by the two metre Bosanr. His powerful header brought a good save from Hatta in the Iwata goal, but it was too much for him to do anything other than parry, and Hiraoka was on hand to smash the rebound home.

Unquestionably helped by the sending off of Park, Jubilo never really looked like scoring, and Nishibe, save for one near catastrophic error of judgement in the first half, was solid as a rock. To be fair, he recovered well from his one mistake and went on to have a great game. As mentioned, Johnsen wasn't at his best with his first touch letting him down more than once, but we all have off days, and his strength in the air was instrumental today.

I'm tired and sunburnt, so I'm going to call it a day. Just before I do, hello to Ken - excellent to meet someone with such a strong English accent!

Now it's all about Wednesday...

Nagai's goal from a personal cam. A hint of the offsides about it to say the least.

As things stand after today's games:

So all we can do tomorrow is win and hope. Kobe and Shonan are out, with Urawa as good as gone. If we win tomorrow we'll go top with a poor goal difference. On Wednesday the final round of games takes place:

So if we win tomorrow, we have to hope Yokohama don't win, and then either Iwata or Yamagata beat the other. Simple.