Breaking news. Kenta Hasegawa is to resign as manager at the end of this season. Can't say it's a surprise, but for all my moaning and whinging I'm not blind to the fact he took us a long way from the near relegation fodder we were back in 2004.

The main reason behind his decision is said to be the inability to turn a team including the likes of Okazaki and Fujimoto into a truly competitive outfit. The news is expected to he officially announced November 2nd; Tuesday.

The biggest thing I'm worried about is that Kenta's kids, like Jungo, will follow him out the door.
Posted by Barry at 6:56 pm No comments:

It's enough to make you cry. Another awful result against piss poor opposition, and our league season is as good as over. It wouldn't be quite so bad if all the teams around hadn't dropped points too. Had we not capitulated against Kyoto and won today we'd now be 2nd. Just goes to show that that something we're missing (and have been for the last few years) is all the difference between another 6th or so placed finish and actually accomplishing something. 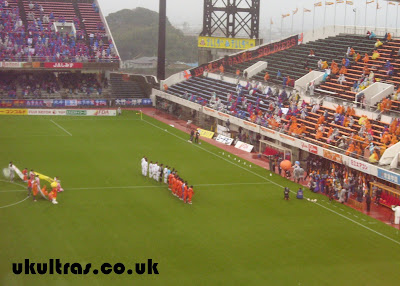 It pissed down all game
At least now we can enjoy the rest of the year without worrying about making an ACL position. Away in Sendai should be a lot of fun. Sightseeing, booze up, maybe even a snowball fight. All without the stress of the result mattering. :wrysmile:

One small cause of mirth was Tokyo's third goal being missed by the officials. The ball clearly crossed the line after Nishibe produced another classic from his seemingly bottomless bag of howlers.

Not that it changed anything in the long run, but having stood in the pissing rain for 85 minutes, it was nice to get a break.

What with a typhoon due to pass over Shizuoka tomorrow lunchtime, our game with Tokyo (kick off 1pm) is officially subject to change. A news release this evening has warned of the potential of an alteration to the kick off time, or of it being postponed altogether.

Check the latest news on the club homepage before heading off.
Posted by Barry at 6:38 pm No comments:

Hardly vintage S-Pulse, but a win is a win, and after last week, it'll do. It'll have to. The league title is a virtual impossibility, and the remaining two spots worth having are also other team's to lose, but all we can do is win. FC Tokyo at home next week who haven't won away in the league since July. 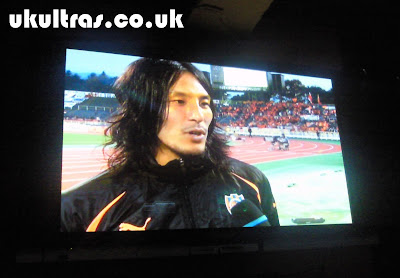 Jungo - who is attracting offers from Nagoya and F. Marinos
I thought we looked poor for the first twenty minutes, and I had a sinking feeling that we were going to struggle. But fair play to the boys, they turned it around and took the three points, even after Hiraoka was harshly send off. His second yellow was fair, but the first 30 seconds earlier was not a yellow. Speaking of cards, Iwashita was very lucky not to go in the book when he tumbled over with Yamagata's number 10, Tashiro. As the pair went down, Iwashita seemed to drive his foot up into his opponent's ribcage. Tashiro was, as you'd imagine, raging after, as neither the linesman or ref spotted it.

Job done. Win our next, and if things go our way, we may be back in with a shot at an ACL spot. But we'll see.

Yet to find decent highlights, but here's a personal video from behind the home goal. Our first and third are captured.

Shit. Horrendous defending on the equaliser. Sluggish play for the majority of the game against a team who will be average in J2 next year. 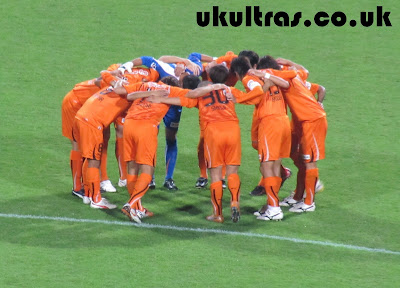 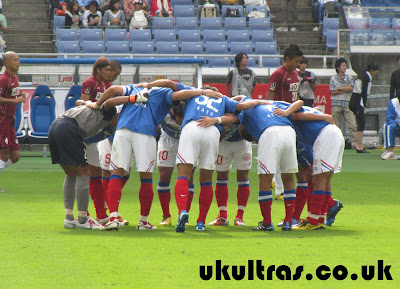 Another kick off on Sunday 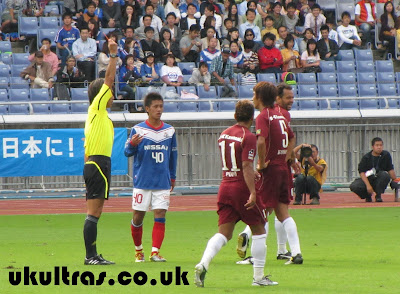 I was free, so I went here
Video

Our Emperor's Cup last 16 game will be played away at Yokohama F. Marinos' second home ground of Mitsuzawa Stadium. Kick off is 7pm, Wednesday November 17th.

As I sit here scoffing the last of my S-Pulse birthday cake, finally I have some happy tidings to convey. We won a game! It feels like an age, and it's certainly been a while since we scored four. 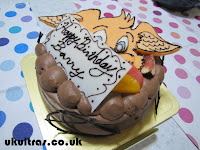 Yes, it was against J2 opposition, but boy does it relieve some of the gathering darkness of recent weeks.

It was all change after Sunday's aggregate defeat. Only Nishibe, Hyodo and Yamamoto remained, with Ito Sho making a first start. He was joined up top by Nagai and Hara. Not a bad front line by any means, and I was impressed with Sho's tricky dribbling game. He has a verve and confidence about him which I like, and want to see more of - especially against higher level opponents.

It looks like a comfortable enough scoreline on the face of it, but our four only came after an absolute howler by Nishibe to gift Mito a lead. Think Green's spillage for England in the World Cup and you've pretty much got it. A speculative effort from Ohashi should have been a straightforward collect, but the ball squirmed up and out of Yohei's hands and into the net. Not that it was the visitor's first attempt. Up to that point, Mito had hit us on the counter more than once and even had the ball in the net, but it was ruled out by the lineman's flag. 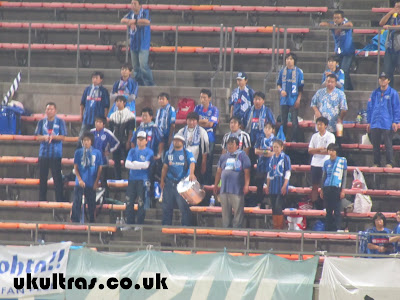 Mito's hardy travelling bunch
Nishibe's error kick started us somewhat, and after five corners in quick succession, we finally broke through via Iwashita. Three minutes later a penalty was put home by the just-brought-on Ono, whose introduction did the trick. He steadied the ship and helped sort out what creativity we'd been lacking in the centre of the park. After getting in front though, we did then tend to sit back and invite Mito onto us, which ensured a nervy end to the game. That was until the very end when a couple of swift moves resulted in goals for Omae and Ota, with Ota's being the last kick of the game. 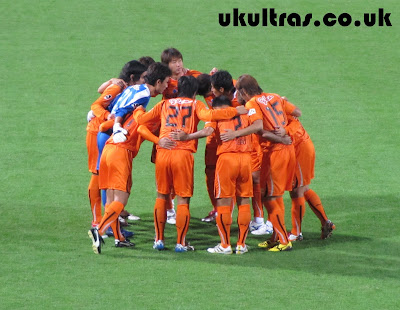 Kick off
In the next round we play Yokohama F. Marinos. The game is scheduled for Wednesday November 17th, location to be confirmed.

Here's a vid I took of our second, Ono's penalty - his third goal in three games, no less!

Omae with our third.

There was a fair amount of booing from our fans at the end, but I was just gutted. It's not like we didn't create. We hit the bar twice if I recall, and the post once. Ono scored for a second game running with a cracking bit of give and go play which cut Hiroshima to threads, but that was all we managed, Hiroshima scored with their first (and only?) shot on target, and for that we're out. No trip to Tokyo next month, and just a rapidly fading chance of the title to cling to. 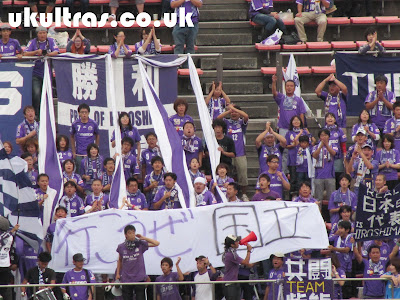 And to the National Stadium they will go
Oh, but there is the business of the Emperor's Cup game with Mito tomorrow, so I know where I'm heading after work. What else is there to do after getting kicked in the bollocks, but stand up, brush yourself down, and get ready for the next boot to connect? I predict a 1-0 defeat due to a dodgy penalty in the 83rd minute.
Posted by Barry at 8:51 pm 2 comments:

As an Englishman, I love watching Argentina lose. So thank you Japan, and thank you especially to our Okachan, whose timing and deadly finishing meant Japan sent Messi and co back home with their tail firmly between their legs. :)

Well, what a cracker, and it was his first for us, so I felt it deserved a little video to commemorate the occasion.


While I've got your attention, football writer and fellow S-Pulse fan Mike Tuckerman, these days reporting from down under, wrote a piece on our very own Aussie hero, Eddy Bosnar. Check it out here.
Posted by Barry at 11:04 pm No comments:

Later, because I'm on may way out. A great game, though, and one we should have won right at the death when we were two on two, but delayed with the through pass just a fraction too long. That said, Kashima hit the bar and looked way more like scoring in the second half. The result lets Nagoya extend their lead at the top after they won with an 88th minute strike. For a city of 2.1 million (three times larger than Shizuoka), and a team on the verge of their first ever J. League title, wouldn't you hope they'd attract a few more than 13027 to a game? I'm not dissing the team - they look like they fully deserve the title, and I know the team and fans will revel in it, but it's be good to see Nagoya City can get behind it's team a little more - they deserve it!

Not had a chance to write much about the game yet, so here's a video instead. If you're anything like me you'll be re-watching Ono's stunner over and again.