Resigned? Sacked? Mutual consent? The official line is he stepped down, and there's no reason to dredge through this episode any further. 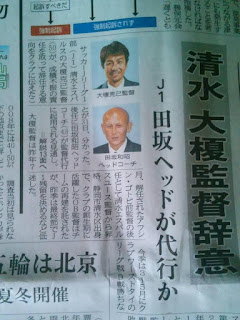 The writing had been on the wall ever since Tasaka was brought in as "head coach". That Oenoki chose now to call it a day, right after an away win in Yokohama, suggests to me two things. One, as rumoured, the club were never going to actively fire him. Two, he must have been feeling enormous pressure, disappointment and injured pride, but was determined to end things on his terms, ideally on a high.

Yes, I'm happy, but a man losing his job is never cause for celebration. Yes, I've whinged and moaned for months (as is every football fan's perogitive), but one thing I know is Katsumi bleeds orange. He loves the club and couldn't have worked harder to make things work. Whether he was the right man for the job in first place, well my feelings on that have been repeated ad nauseam. This chapter is over, and for it's worth, I hope Oenoki will find a position within the club once again, ideally at youth level. His record as a developer of young talent is good, and worthy of another contract.

Tasaka doesn't bring a particularly impressive management record, but he does have a management record. A history of building teams around a tight defence is of most pressing interest. As things were I couldn't see us escaping the drop zone. With Tasaka, who knows? But something had to be done. What will now be will be.

Saying thank you to Oenoki after all my moaning these last 12 months might seem a bit rich, but football is a game. It's not personal. It never should be. He did his best. Not being being able to deliver for the club he loves must have torn him apart, but ultimately he was man enough to hold his up hands and hand over the reigns. So, thank you Oenoki. Long may you continue to be part of the club you love.