You know me - always like to have my fingers in several pies at once. Well, for the last 18 months or so I've been beavering away on a book aimed at both J. League virgins and old heads alike: a complete guide to all the 2012 top flight stadiums. Over 140 pictures, stadium access information and travel tips are packed into 70 full colour pages of Japanese football information. It's just coming to completion now, and will be available in February. Read more, and check out some sample pages at the website.

It's the first time this information has been brought together in English in print form, and you're more than welcome to buy one come February. It will be available in the same way as our little UK Ultras book was, via Blurb to ship worldwide.
Posted by Barry at 3:23 pm No comments:

As I'm sure you all know by now, Eddy Bosnar is off to Korea with its "better facilitates than Japan" and "higher level of football".

Cryptically (or maybe not), he said that this may prove a good move for Shimizu. What that probably means is Ghotbi was after a foreign striker and with all our foreigner spots already taken, something had to give. Well, watch this space as ever.

Thanks for the memories Eddy, we won't forget the goals, and all the best for your time in Korea. I'm still yet to properly visit, but if I do maybe I'll try and get to a Bluewings game.
Posted by Barry at 3:15 pm 1 comment:

Wishing all our readers and S-Pulse fans the world over a very Merry Christmas, and a healthy and prosperous new year! 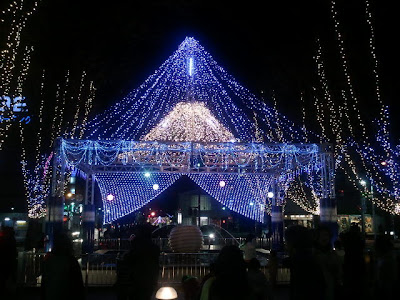 While I'm here, some good news. U22 international Yutaka Yoshida has signed from relegated Kofu. There was interest from as far afield as Germany, but we managed to snare the speedy young prospect who can play either left or right back.

With Ota looking like he might be off to Europe, we needed to fill the void, and this looks like a solid signing.
Posted by Barry at 12:53 pm 6 comments:

Bollocks. See you in March. 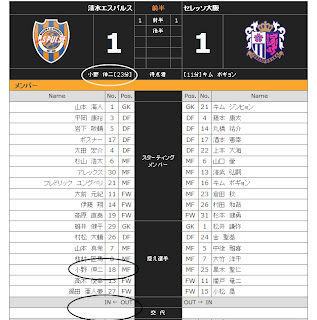 Full shootout. Sorry Iwashita, but that was a crap penalty. Just boot the bloody thing as hard as you can! Aaaaah, not blaming anyone. Penalty shootouts are not football. You may as well just play janken.

In short, job done, the boys march on - cup 1/4 finals here we come! We'll play Cerezo Saturday 24th on their home ground, which must make them favourites, but we'll be fielding a stronger team than today and will be up for it!

The first half was pretty uninspiring stuff but we picked it up a bit after the break. Brosque made up for a stunning miss not long after the restart by scoring two minutes later, and Sho even got on the score sheet again. That's not to say he had a great game, but goals are good for confidence. Will he start next week, though?

JEF had that air of a team really trying their hardest (without wanting to patronise them) but they just never really threatened. They'd managed to beat Jubilo in the last round, but for all their huff and puff on more than one occasion they showed very poor composure when put under pressure which nearly cost them goals. Had we needed to, I guess we could have stepped up the game and pressed them into more and more mistakes, but it was just never that necessary.

So, anyway, we're through and it's job done so no complaints here. But we can expect a stronger starting 11 and a better performance against Cerezo. It'll be the first J1 opposition we've faced in the cup this year and playing in their own back yard we'll have to raise our game. I hope to see Ljungberg start and Ono is back from injury. There are no other major injury concerns, so we should be able to to field a pretty much full strength team. 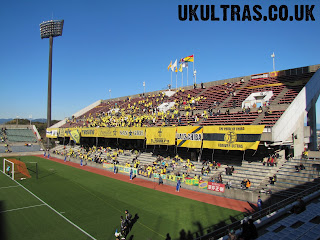 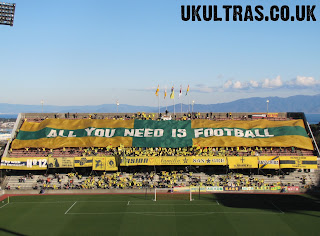 Could NOT agree more :) 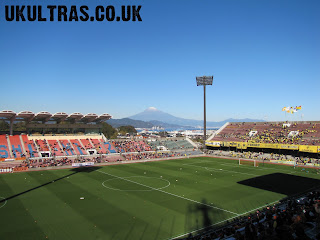 It's a Shizuoka thing

Slow motion of both our goals. Thanks to YouTube user Imoimo9.

S-Pulse moved quickly this morning to quash rumours linking the vacant South Korean job with our Ghotbi. Top marks to the club, and of course the man himself, for their speedy action in easing supporters' worries.

Great to know our manager is a man in demand, but he's going nowhere. :)

Ono to Leave? / Offers for Toyoda and Yoshida

Widely reported this morning was the baffling news that S-Pulse have offered soon-to-be-out-of-contract captain Shinji Ono a one year extension at a FIFTY PERCENT REDUCTION of his current wages.

The man himself said he may well be playing elsewhere next season (who can blame him!?), and this would be an absolute disaster for the team Ghotbi is trying to build.

News as it happens will be reported here.

We have made offers for Sagan Tosu's Yohei Toyoda and relegated Kofu's defender Yutaka Yoshida.

26 year old Toyoda was the J2 top scorer for this season just ended with 23 goals in 38 games. Rather less impressively he has scored just 6 goals in 54 games at J1 level.

21 year old Yoshida is a local lad from down the road in Fujinomiya.

Freddie up your Desktop

This month's S-Pulse desktop wallpaper is our Freddie. Get it here.
Posted by Barry at 10:30 pm No comments:

Tweeted this, but forgot to post this wonderful news. S-Pulse Youth member Hideki Ishige has been named the Asian Federation's young player of the year.

The young midfielder, still only in his second year of high school, has represented Japan at U15, U16, U17 and U18. He becomes only the fourth Japanese player to receive the award.

This Saturday, December 10th between 10am and 2pm will be a chance to meet your heroes down at the Miho training ground. Or rather it's a chance for them to thank YOU for your amazing support over the past league season. Details in Japanese here. Entry is free. Not to be confused with the Supporter Thanks Day which will happen early next year.

As widely known, and Tweeted sometime ago, it's been officially announced that Nagai will not be getting an new contract at the end of the year. A widely popular figure down Nihondaira way, the last couple of years just haven't worked out as they might have. He's still got a few years left in him though, and we wish him all the best.

S-Pulse have signed Tsukuba University student Kohei Hattanda. The 21 year old midfielder has represented Japan at U17 level and was chosen for the all Japan university selection in 2010.
Posted by Barry at 9:47 pm No comments:

And that, as they say, is that. Another season all wrapped up and consigned to the history books. Well, a league season, anyway. The small business of the Emperor's Cup is merely getting started, and come December 17th we'll all be back at Nihondaira to take on JEF United for a place in the quarter finals. I think the J. League and Emperor's Cup would only benefit from a little mutual promotion. Rather than pretending the cup doesn't exist, if the league got behind the oldest competition in Japan a bit more I bet we'd see increased gates and greater interest generally.

A depleted S-Pulse (no Ono, no Ljungberg) started well. A rare (first time in six months or more) start for Ito Sho saw him score his first goal in orange. Only took him a year. We were the better team for a lot of the first half, but the visitors had to win and after a while found their feet. A couple of cock ups helped them on their way, but I felt like they were always going to win this.

That said, we were moving the ball around well at times and Ota, back at left back, was having a good game. He's been attracting interest from Europe recently, but I hope he goes nowhere for a while. Takahara also went close before half time, and only a fine save denied him.

After the break it felt a bit like we were just going through the motions, and I guess when you have nought to play for with all thoughts turned towards the cup, that's kind of inevitable. We never seemed to get a break and it played out 3-1. Well, that's it for J. League 2011, but with the last 16 of the cup to come don't be going anywhere! Still plenty more blood, sweat and tears to come this year in Japanese football.

A review of the S-Pulse league season will come over the next couple of weeks. 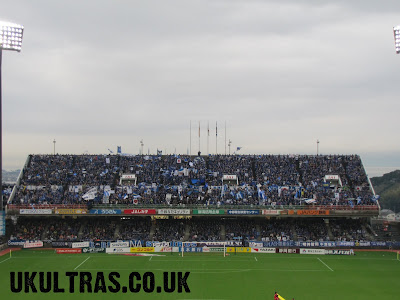 Is that all you take away? 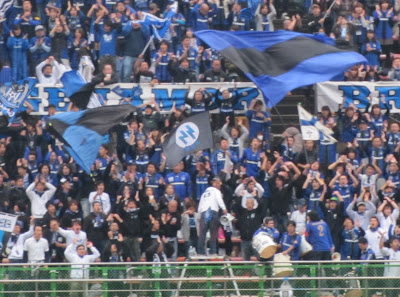 What better than a Nazi paramilitary organisation to provide inspiration for a football flag? 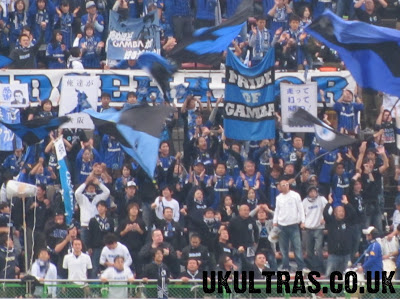 Can you spot fellow Brit Ben Mabley deep in the Osakan fray? 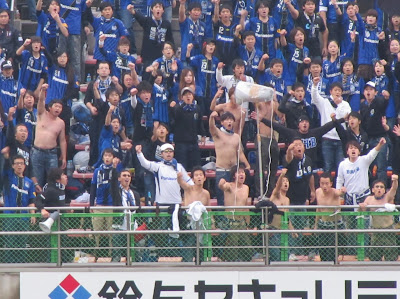 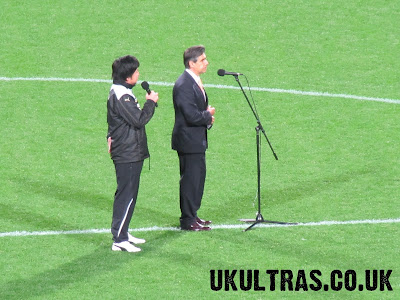 Ito scores a goal! No, seriously!