Here it is, S-Pulse's full J1 and Nabisco Cup 2014 fixture list. Before, if you can believe it, the J. League's own website! Fortunately S-Pulse were on the ball and released the year's schedule around an hour ago. Converted into English, here you go. All home games are at Nihondaira unless stated. Weekdays in red signify a national holiday.

The group stage is comprised of a pool of seven teams. After six games the top two clubs go through to the quarter finals.


On Friday January 31st the J. League’s J1 fixtures for the 2014 will be revealed to a waiting public. Or rather, fans will discover their team's remaining 32 fixtures. The opening two weeks were made public some time ago. But come Friday evening at 5pm, or perhaps nearer 6pm?, fans can view the full footballing year ahead. Planning the coming months of away days and big home games is one of the joys of the closed season. Why then do I feel the J. League misses out on an opportunity, albeit relatively minor, of whipping up a little valuable publicity?

The opening two weeks fixtures released separately, without warning, and often leaked online early, is the beginning of the problem. Why the staggered announcement? By the time the full remaining fixtures are made public, again without warning or fanfare, again often leaked online in unconfirmable dribs and drabs, season ticket deadlines have passed. The impact on sales may be negligible, but some might be reluctant to shell out for a year’s commitment without a guarantee they can make their must-see games. Why even create that risk?

Ensuring there's a little drama and excitement around the release of the fixtures would only serve to benefit all concerned. At the time of writing, the J. League homepage makes no mention of the date, let alone time, of this year's release. Via information gleaned across the web I’m aware of the date, and from experience, I know it won't be in the morning, but early evening. Vague? Just a bit. The steady trickle of leaked fixtures on Twitter are welcome, but does little to court the anticipation of supporters.

Why don’t we set time and date well in advance, to fall before season ticket deadlines, and accompany it with an online countdown? Let’s maintain ultimate secrecy around the fixtures – all 34 weeks of them – to be revealed online, for example, on a Monday morning at 9am. The excitement of discovering how the year shapes up would be the talk of sports fans in offices up and down the country. Countless emails would be fired off as fans made preliminary away trip arrangements. The J. League would trend on Twitter as club hashtags went into overdrive.

It may not be the most pressing issue in Japanese football, but for many during the closed season, after new signings, the fixtures are the biggest thing to look forward to. Leaked information and rumours do anything but build up enthusiasm. I hope in future years the J. League will seize fixture release day as a chance to swamp their website with traffic and make the league, for a day during the off season, the talk of the sporting country.
Posted by Barry at 10:51 pm No comments: 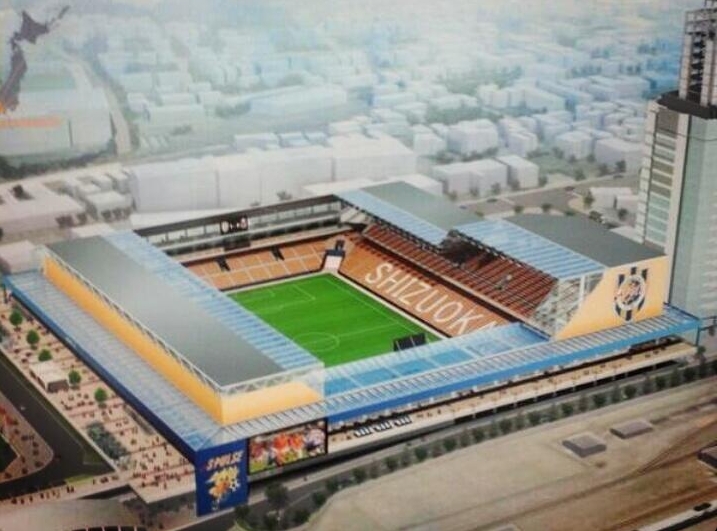 In a few years time, is that likely to be the announcement for trains passing through Shizuoka? Maybe, because S-Pulse's investigations into a location for a new stadium have highlighted an open piece of land beside Higashi Shizuoka JR station. When I say beside I mean slap bang next to. You exit the steps and you're there. It makes Sagan's ground seem a trek from the station.

While nothing is yet decided, two things we do know is that S-Pulse want to build a new home (I agree), and this city owned land is earmarked for development. So let me introduce Higashi Shizuoka. 1 Shizuoka Station
2 Nihondaira Stadium
3 Shimizu Station
4 Miho Club HQ
5 Higashi Shizuoka Station
Since the turn of the century this part of town, a 30 minute walk, 3 minutes by train, or 6 by the local Shizutetsu Line, has been rapidly developed as a new commercial district. It was one of the areas put forward to house Shizuoka prefecture's world cup stadium, the ground that would eventually become Ecopa. Compare the middle of the two images below for how the area has come on in a few years: 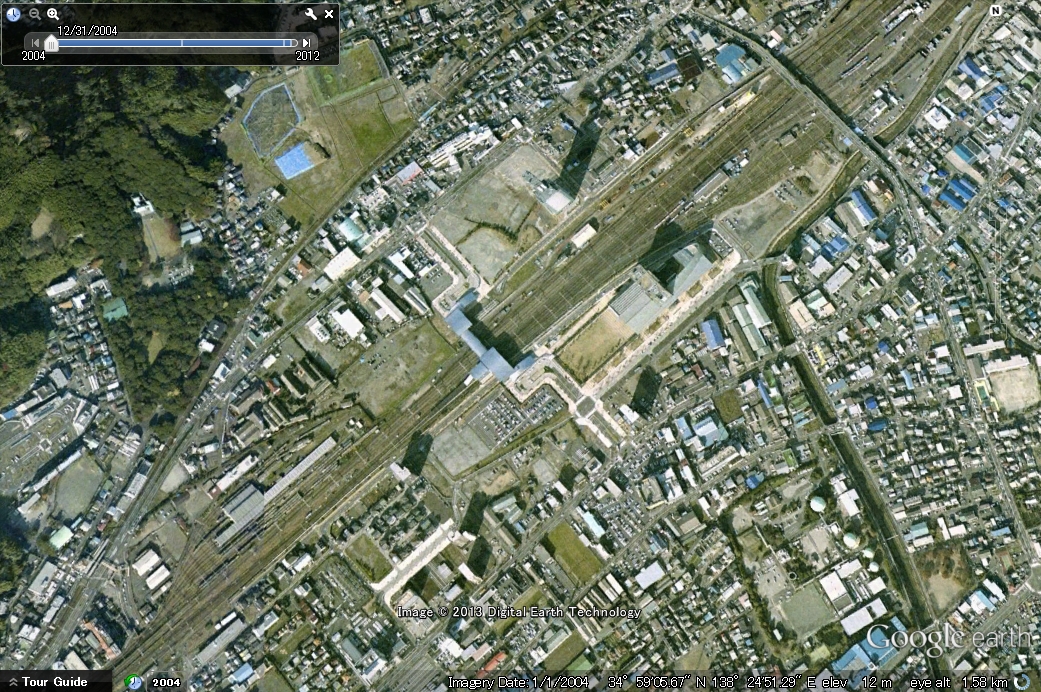 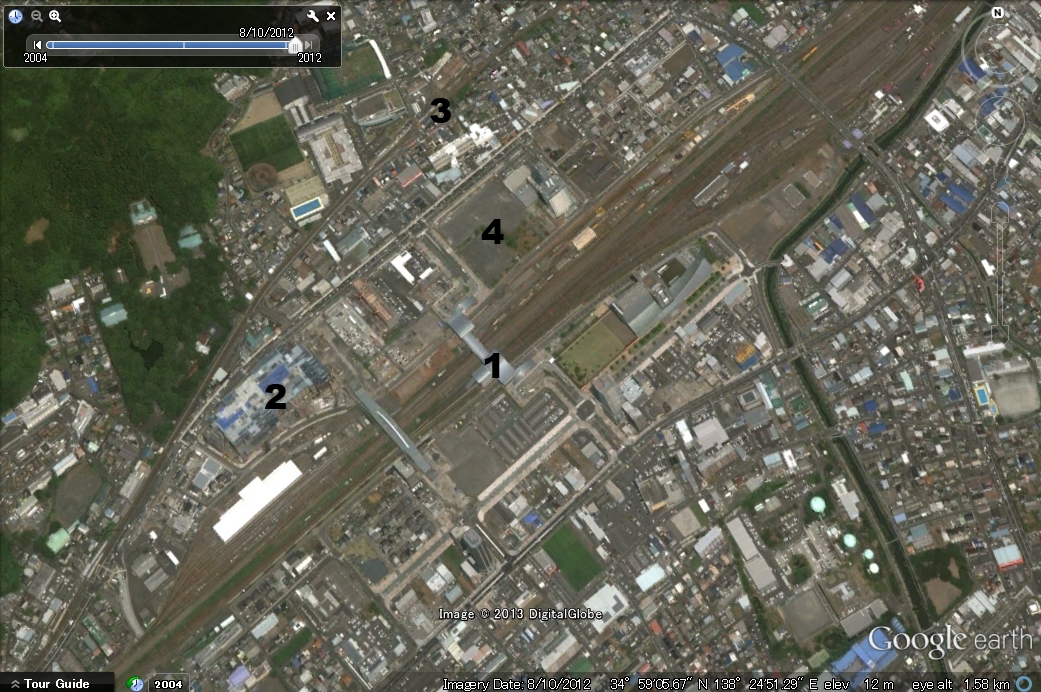 The JR station opened in 1998, and was constructed to be future proof with concourses and travellators more reminiscent of an airport. The station could certainly handle match day crowds. Coupled with major roads running either side of the station, no small amount of car parking, and the smaller local line station a five minute walk away, an infrastructure appears in place. The area is as central a spot as is possible, the polar opposite of Nihondaira. That many Shizuokan's can't find Nihondaira on a map is a restraint on S-Pulse's potential. The club are aware of this and eager to put it right.

My one concern with the land is the size. It has always struck me as too tight to fit a decent sized stadium. 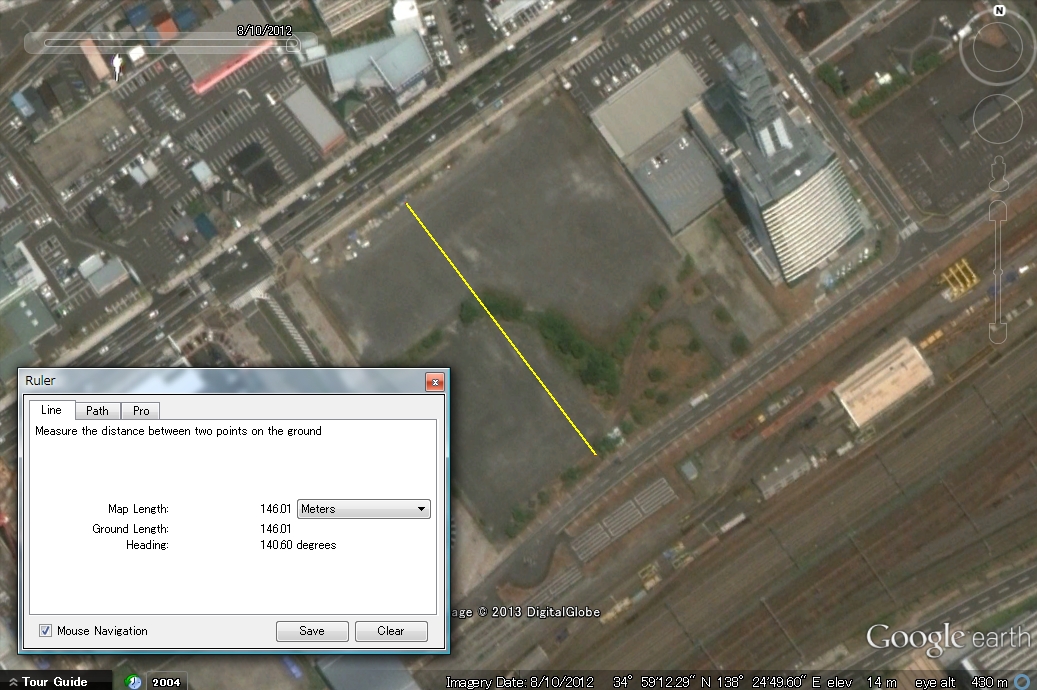 150 metres in length, after the pitch you're left with around 20 metres for each end stand. Not impossible, but most modern stadia end stand footprints far exceed that. Indeed, Nihondaira's ends measure just under 30 metres in depth. Unless construction is designed to extend beyond the site's limitations it's hard to envisage the space being there. 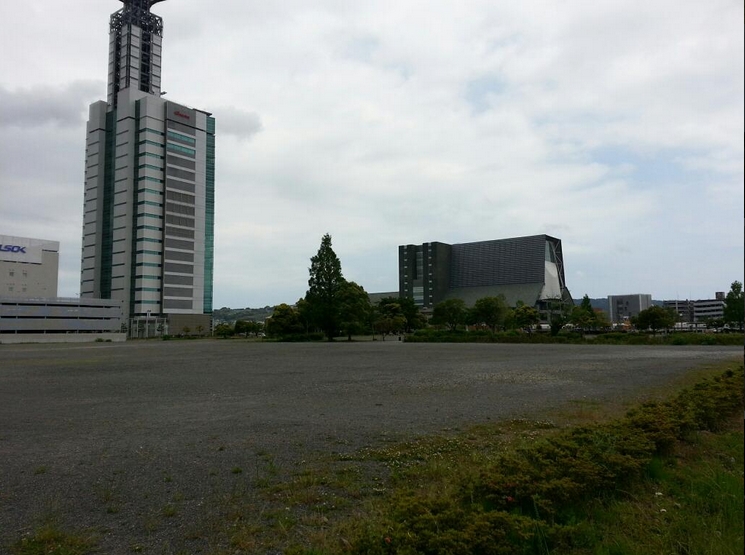 But of course, I'm not an architect. I've not constructed a football stadium that wasn't made out of Lego. If there's a way it can be done, Japanese engineers will find a way.

The location is fantastic. In the the heart of Shizuoka, it's passed by the Shinkansen and would be seen by thousands of people every day. Like Nihondaira, it too boasts a view of Mt. Fuji. The huge Mark Is shopping centre is next door, as are several other food and drink establishments, providing fans with a post match reason to disperse gradually.

For the club's profile and position in the hearts and minds of the city's three quarters of a million residents it would provide an invaluable boost. Questions of funding, capital, and genuine feasibility are for the months to come, with the fate of the land set to be decided in March. Until then it's an unquestionably exciting future to ponder.
Posted by Barry at 11:55 pm No comments:

With the last game of 2013 played, it's time to update the Japan's all time league table.
Points are awarded as follows, with continental cups counted, but show-piece super cups not.

Time spent in a lower division is counted for 2014, so here you go, the official list of Japan's most successful club teams:

They didn't win anything this season for what feels like the first time in an age, but Kashima remain untouchable. The biggest change is back to back champions Hiroshima finally climbing into the top ten. Relegations have held them back so far, but two league titles is a huge achievement and is reflected in their jump up the rankings. Yokohama, who very nearly did the double this season, gain ground on Iwata. The the latter's relegation saw them drop points.

I seemed to have had Nagoya calculated one point short, so apologies and I've rectified that, although it makes no difference to the rankings. No increase for S-Pulse, but expect that to change next season! To quote the club's slogan from 2008, We Believe. :)

With the new league system from 2015 it'll be increasingly hard to calculate this table. In the 2 stage era of old, stage one and two played each other for the title. This gave us an understandable, if not perfect, way to decide the most successful teams. From 2015 we have three stages, with the third being comprised of anything up to five teams. The champions could easily be a team who finished second after 17 games, then bottom after the second 17. Yep, for all the other problems with the new system, it also screws up this table. What a shame.
Posted by Barry at 10:02 pm No comments: