What it's all about.

Yesterday I was being dragged around an aquarium with the other half, so no report of any substance, I'm afraid. I was stealthly checking the scores over the course of the day though, and as Hiroshima, Sendai and Urawa all dropped more points, we went into our early evening game with Kashima with everything to play for.

We started with defensive stalwart Jong-a-Pin on the bench, presumably just to rest him ahead of next week's cup final. He's been one of our best performers over the course of the season and we'll need him in perfect condition on Saturday. He came on for the closing stages to help keep the home team frustrated.

Our versatile line up included Hattanda and newcomer Senuma also made an appearance for the last 20 minutes. Kim showed a touch of class to get our first, and Omae got his 12th of the season to place him third in the top scorer list.

This season has been a real journey with the varied exits of Ono, Brosque, Jymmy, Edamura and Iwashita, but our squad has risen to the occasion superbly. A unified fighting unit, and I have every confidence that next week they'll bring the first silverware for a decade back to Shimizu.

And follow this link for more extended highlights. The video starts around 20 seconds. Finally, check out this video of some home fans, presumably upset at how bad their season is going, decide to lean over (but not climb over - wonder why?) the separating barrier between us and them and dish out some abuse.

Firstly, your anger is probably best directed at your team. Secondly, where was the security? ONE MAN in blue doing next to nothing. Had we not been so happy after the win, it could easily have turned nasty. Finally, try that in most any other country and you'd have got beaten shitless. Pathetic and pointless, and going to lead to a fine for Kashima. I'd say ban them, but that'd be doing them a favour. :)
Posted by Barry at 2:56 pm 2 comments:

After the last four wins in a row which had put us up to 4th in the table and through to the next rounds in the cups, yesterday's draw with struggling Kobe came as a bit of a frustration. The first half wasn't great, but sheer persistence brought us level going in at the break. Muramatsu scored his third of the season from his head. It took a bit of a deflection on the way in, but on balance, we'd earned it.

I actually missed the Kobe opener thanks to the cameraman stationed directly behind us complaining about flags during Revive. Yeah, thanks for that cameraman. Use the gantry down the away end and you wouldn't have several thousand home fans waving flags right in front of you.

So anyway, after that first half, we were a lot better in the second and for most of it had Kobe hanging on. We just couldn't find the net though, and as the game went on Kobe threatened increasingly on the counter. In particular Takahara got dispossessed around the 90th minute and Kobe steamed forward and really should have won the game.

It ended 1-1, and with Hiroshima losing at home we're only nine points off the top with five games to go! In seriousness though, after third placed Urawa lost again we're only three points of third, and a win against Kashima next week could put us there.

So that's Kashima next week and then again the following week in the cup final. I won't be in Ibaraki next week, but wild horses wouldn't keep me away from the National Olympic Stadium November 3rd. The game completely sold out on the first day of general sale. Contrast with the last time Jubilo were in the final - it didn't sell out until the day of, and even then there were 6000 empty seats. ;-)

Have a good week - the update after next week's game will most likely come on the Sunday. 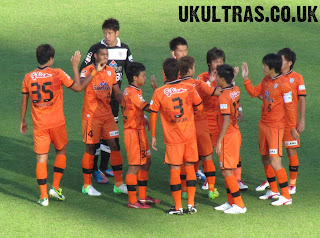 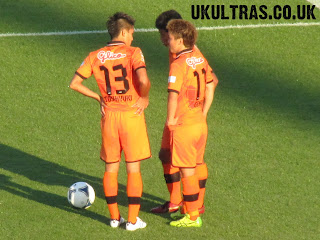 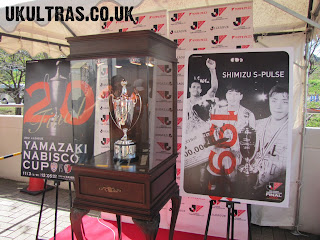 Click here for a link to full highlights, or watch a shorter video below.

And a personal video of Muramatsu's header.

Ishige to Man City! Kind of

Some wild reports were flying around this morning on what I've since learnt is the not-to-be-trusted Sponichi "news" website. They claimed our Hideki Ishige was being sized up for a £3 million bid from the Premier League champions, and immensely wealthy, Manchester City.

While incorrect, the reports carried a grain of truth in that Ishige will be off to Manchester at the end of the J. League season, but to join City's training for a spell.

Word from the club is that with the young star's future development in mind, this is an opportunity for him to learn and grow at the highest level. As for a transfer, that isn't currently on the agenda. And probably rightly so. He's still a kid, but with massive potential to play at the top of the game, and there's no need to rush into a transfer abroad.

As my previous semi-rabid post reported, we're going to the final, baby! The game happened while en route to Heathrow, so I couldn't find the outcome until I'd checked in, dropped off my bag and navigated security. Finally getting to an internet spot, I got online just in time to see Omae complete his hat trick and cement our place in the League Cup final.

Two weeks ago when I got on a plane heading the opposite direction, we had to face second placed Sendai, take a trip away to iwata, and had an Emperor's Cup 3rd round tie and a League Cup semi final to deal with. All in just two weeks. Well, take a bow lads - P4 W4 D0 L0. Goals for: 8 Goals against: 1. Our young team stepped up and made a statement loud and clear. After losing midfield talisman Brosque and team captain Ono you would have forgiven them for wavering or wobbling, but none of it.

Again, I'm afraid I can't comment too much having not seen the game (read our manager's thoughts here), but 3-0 is an emphatic response to the nature of our defeat in the first leg. I know may have gone on a bit about it, but I stand by my previous rantings. So anyway, here we go. Our first shot at silverware under our new regime, and from a personal aspect, my third time at the National Stadium with S-Pulse.

In 2008 Oita broke our hearts, and on New Year's Day 2011 Kashima stole cup glory from us. Our opponents on November 3rd, Antlers are not the same team they were, and more importantly, neither are we. We're better. We've got the measure of them and their ageing team is going to to have it very tough against out glory hungry youngsters. Ticket has been secured (thank you, Shunsuke!) and the countdown has begun!

The first trophy for a decade is on it's way Shimizu - I can just feel it!

Some personal videos from YouTube user ssnnddttyy. I love these as it makes you feel you're there. Genki's goals in order. 1.

2. Takagi's ball for Genki's second is absolutely perfect, but Omae still had it all to do. Great finish.

Not much of one because I wasn't there and I'm writing this five days after the event. Just trying to catch up having missed a few games. Why not read match notes from someone who was there, ie, our manager, Afshin Ghotbi at his official website, here.

The 4th round will be against... I don't know yet. This year they're breaking with tradition and conducting a draw for the next round. Much better if you ask me. No more J1 teams being kept apart. The magic of the cup to my mind is just the opposite; big teams all knocking each other out and letting someone like Grimsby Town get through to the later stages. Anyway, as soon as I know the next opponents I'll let you know too.

I'll be getting the blog fully up to date over the next couple of days ahead of the home game with Kobe on Saturday.

A personal video of Shirasaki's winning strike. He's so far got four of our six Emperor's Cup goals.


Get in! That's the double over iwata this season, and it gets no sweeter! Thanks to all involved - this means so much to all of us in orange. Have a beer - you' ve earned it! 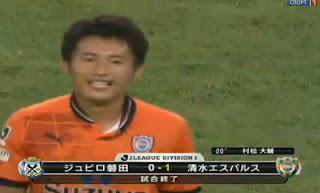 Maybe blocked in Japan, but for those of us overseas: