Not got a lot of time to write much tonight as I have to hit the hay early. Off to Tokyo tomorrow before flying to England Tuesday for my brother's wedding. I've barely started my packing, so have it all to do! 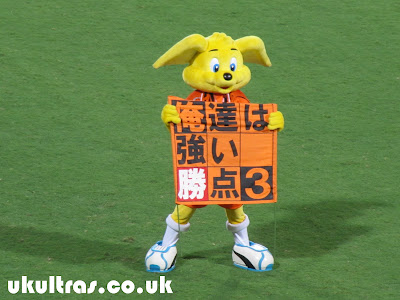 Yep
Well, while I'm still awake, I'll put on record that we were a changed team after the Niigata and Iwata games. Much, much better stuff, and we came away with a deserved three points tonight. Kawasaki were, as we all know, dangerous going forward, but their frailty at the back (and wobbliness in midfield) was exposed time and again. We ourselves were perhaps fortunate to end the game having conceded none, but with a little better finishing, Frontale could have been facing, maybe not a cricket, but certainly a baseball score. 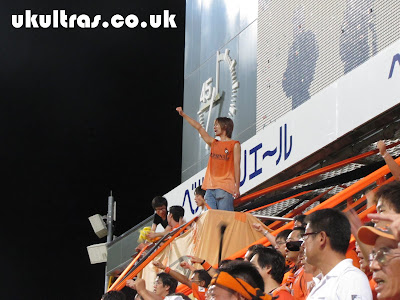 It was a cracking game, and I'm sure the neutrals among the near 19000 present (if there were any) had a great time. For the rest of us, it was nerve-wracking stuff. Check the highlights below for an overview of the game.

I'd better get myself to bed, but before I do, please take a bow Juninho. Your diving and play acting tonight was the most embarrassing display by a professional footballer I've ever witnessed live. Here's a tip for you: if the ball gets away from you in the penalty area, at least make sure you're within two metres of the defender before you trip over your own feet and tumble to the floor. One or two times you got away with your diving but doing just that - falling over when somewhere near your opponent - but your attempt at winning a penalty was just laughable, and I hope you felt as ridiculous as you looked. 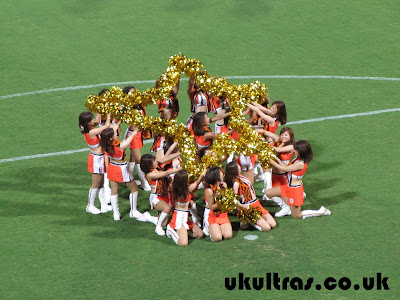 And, yep
No game this weekend due to internationals, but Wednesday sees us take to the Ajinomoto Stadium for leg one of our Nabisco Cup quarter final with FC Tokyo. Bring it.

And, go on then. Here's a video I took of our penalty.

Fuz writes:
Due to summer games always starting during someone's bedtime, I have been unfortunately (fortunately?) unable to get to the last few games. I have, however, spent my time teaching my little one all about S-Pulse, and seeing as the last few results haven't been smile-worthy, I thought I'd share this with you all instead.

So what if she can't play for the team? She'll just be a cheerleader instead!
Posted by Fuz at 9:25 am 2 comments:

Well if you can't score in 45 minutes against one of the worst teams in the league, you deserve to lose. Ono was nowhere to be seen in the starting 11 for reasons I can't tell you.

Probably the most interesting to happen tonight came before kick off when S-Pulse fans unveiled the same banner as last year aimed at Jubilo. It read "Jubilo" but was opened up to read "Kick your ass". The police (EDIT- or hang on, maybe they were the stewards?), on seeing it, tried with all their might to pull it down. They failed completely. 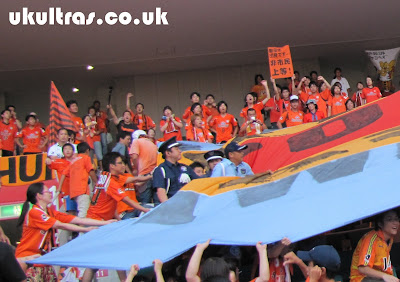 After the banner had been on display for several minutes, all the while with the three or four policemen (stewards?) trying in vein to pull it down (the above picture was as good as they managed), loud discussions continued with the fans responsible and the staff involved. Many people around me were asking what it meant, and I translated it. A very light jibe aimed at the opposition. Not offensive, not obscene, not about to incite any violence (95% of the crowd had no idea what it even meant), so why the over reaction? Who knows.
Posted by Barry at 9:24 pm 1 comment:

There isn't one, because I was on holiday when I went to this and didn't get back to Shizuoka until the Saturday. So instead of the game, here's three pictures of anything but. 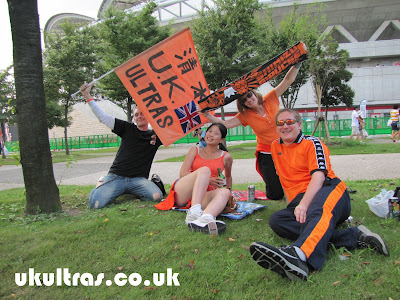 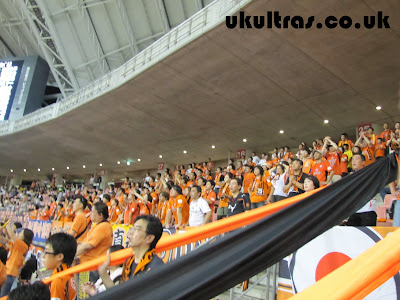 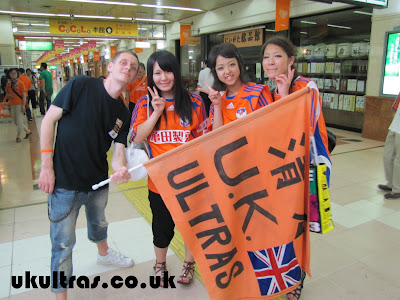 The highlight of my evening? Probably :)

Videos
Hara coming on and his goal.

There's no report for this because I have to get to bed and I'm off to Niigata in the morning. Because of that, I may or may not be able to update this page after Tuesday's game. Worst case scenario it'll be done Sunday evening after the derby.
Posted by Barry at 12:32 am No comments:

Saturday's match with Yokohama F. Marinos is completely sold out.

This is the fastest selling game at Nihondaira certainly for the last five years, probably a lot longer.

Some nights are just magic. 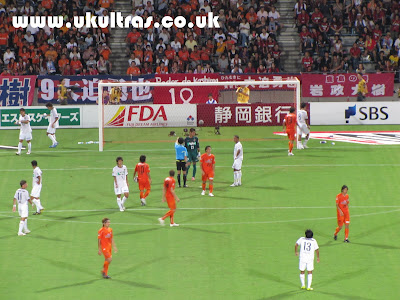 Jungo gets ready for his penalty

This was the biggest game of the season so far, and boy did it live up to expectations. A sold out Nihondaira was rocking under the floodlights as S-Pulse beat the defending champions to end the first half of the season top of the table.

Despite my best intentions, it's hard not to feel slightly awed by Kashima. Their constant strength over the last 17 years which has seen them claim seven J1 titles is something very hard to ignore, and while we went into yesterday's game with no fear, there was a tangible tension around Nihondaira in the build up to kick off. 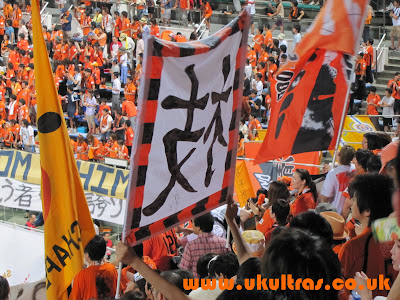 On in the 73rd minute, scores in the 74th: Edamura
Not only was the result massive, so was the performance. We could, and maybe should, have won this more comfortably. More than once we cut through the Kashima defence and were only denied by some uncharacteristically un-deadly finishing from Okazaki and / or inspired goal-line defending / goalkeeping.

So our winner, while a bit lucky (chested in by Edamura after a failed clearance), was fair on balance. We took the lead after an absolute gift of a penalty. A needless handball off a free kick into the area left Jungo with the job of calmly sending the keeper the wrong way.

Kashima should have opened the scoring before this after a shocking clearance from Nishibe went straight to a white shirt, but Iwashita, who will be an international before too long, did amazingly well to neutralise a very real danger deep in the penalty area. Without Bosnar at the back we lacked a bit of physical presence, but Hiraoka did a good job in the Ozzie's absence. 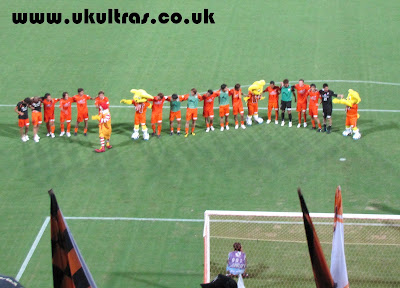 Loco time - With Ronald McDonald
The roar when Edamura put it home for the winner was probably heard back in Ibaraki, and Kashima had nothing left to prevent their third defeat of the season.

These are the games we have to win if we want to have a decent pop at the title, but more than the big ones, we have to keep this form up in the "lesser" games, namely another sold out match under the lights at Daira next Saturday. 9th placed Yokohama FM are the visitors.

Before I sign off, a couple of facts and a picture: Last season we scored 44 goals all season. This year at the halfway stage we're already on 37. Last season we won 13 games all year. This year we're on 10 already.

And now the picture: 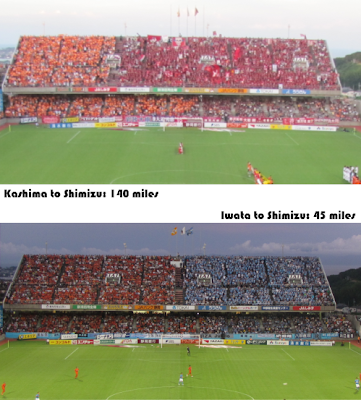 And so you can get the feeling of being there, this is Jungo's penalty from ssnnddttyy's personal cam:

Emails exchanged between me and Fuz on Sunday, August 1st 2010.

thank fuck for that 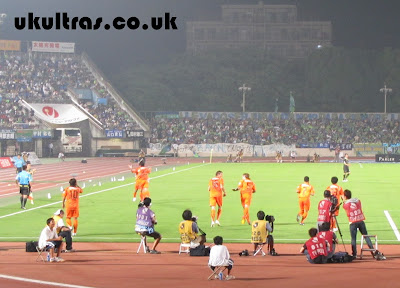 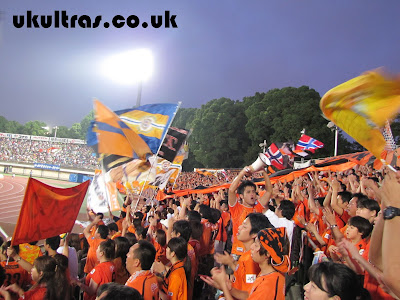 Seconds later came an an irate call from Fuz to Barry 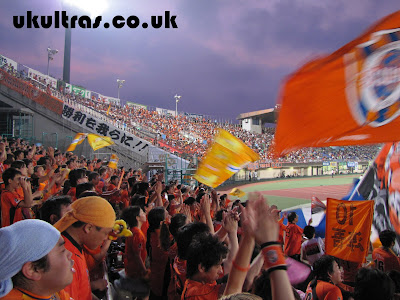 Next up, Kashima for a top of the table clash at a sold out 'Daira. Bring it.

And here's what they do in Hiratsuka in lieu of a big screen: