Losing a lead after the score stood 3-0 at 85m is infuriating. Obviously. What makes it worse is not just we'd lost five in a row before this. Nor how we chose to invite a team on to us who, but for taking some very real chances, had pretty much matched us first half. Or even that Yamagata had scored just two goals all season but were today allowed to more than double their year's tally. That all stings pretty bad, but the worst part? The bit that makes me sigh with resignation and just want to shrug my shoulders? It's not throwing away this one game, it's the larger disaster 2015 is becoming, and how f-ing inevitable it all was. 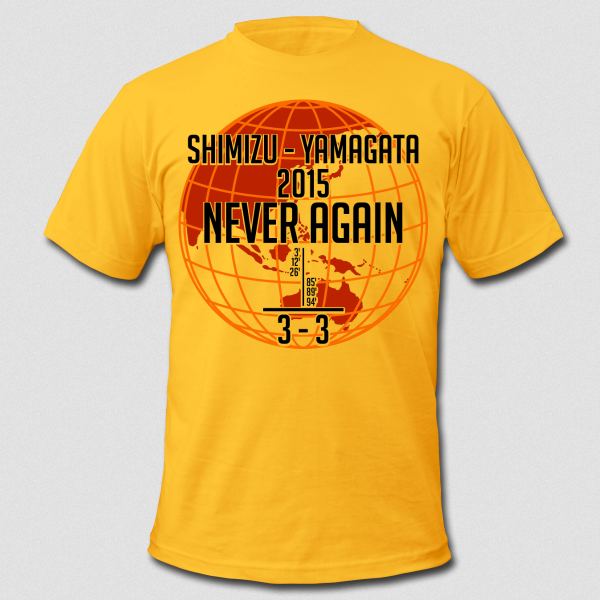 Surely nobody who watched us play the second half of 2014 could have expected anything less? Apparently enough people, and crucially enough people with enough power, did. They must have seen something I missed. Naive as I was, despite surviving demotion I genuinely thought there would be a change before pre-season. Things had gone very badly, and rather than risk a repeat, it was time to cut loses and bring in a proven leader. That didn't happen. The last thing I am is an expert, but before this season started I predicted a "long, hard year of bad football." I wish I'd been wrong.

Last July, I tweeted "Youth manager Katsumi Oenoki will be taking over the helm initially, presumably while a proper replacement is sought." That time I was wrong. It was no caretaker position, but as we tumbled down the table nobody seemed too concerned about the rookie at the helm. We barely stayed up, and did it with nothing approaching any style. As fans we inevitably seen things in generalisations. We don't know half of what goes on behind the scenes. We judge largely by performances, results, and track records. Well, I think we've all seen enough by now.

This year's surprise opening win over Kashima was just that, surprising. Since then it's been the same deal as last season. Nothing has changed. We've got a solid base of players, and brought in talent in the form of Utaka and Duke - both of whom have impressed - but defensive frailties and tactical decisions see us 16th, in the drop zone. And if we can't defend a three goal home lead against one of only two teams worse off than you, make no mistake, we are getting relegated.

The one thing we have on our side is time. Over two thirds of the season remain. There is no play off to decide the three relegated teams. That nonsensical lottery is reserved for choosing a champion. All we have to do to retain our top flight status is be the 4th worst team in J1. I don't think we have anywhere near the 4th worst squad in the league. What we don't have is a man to in the short term, stabilise the ship, shore up the defense, and in the long term, get the best out of his squad. Until we do, nothing will change.

This afternoon will go down in S-Pulse history for all the wrong reasons, but it might just have been the day that first saw the word "untenable" uttered around the corridors of power. That would offer one very slight silver lining. However, while there is currently time, it will run out fast. Things have to start moving now.

The goals from today. I don't think I've ever witnessed a team I support surrender a 3-0 goal lead from 85 minutes. So, yeah, thanks. I'm going to have nightmares tonight.