That has to be amongst the most insane final 15 minutes of a game I've ever watched. 75 minutes gone and we're coasting along at 1-0. Osaka had just brought on another striker in Bando, but Kaito had been keeping the visitors at bay with a string of stunning stops, and if we could keep it tight we should be good for three points. Well after five goals, several more gilt edged chances, four yellow cards and some of the most cynical time wasting you'll ever see, it finally ended 3-3, and I needed a lie down. 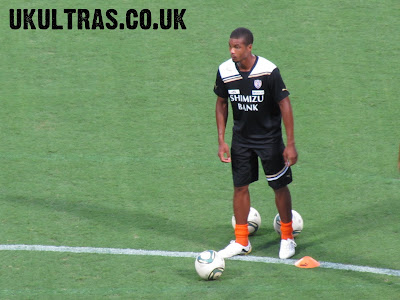 It started with a penalty to equalise, and straight from the restart Osaka scythed down the left wing, swung it in, and there was Bando again. Two one in the blink of an eye. Kick off, and within seconds Lopes goes down on the floor like a sack of crap and doesn't move. The play acting and time wasting started right on cue. He was stretchered off, we pressed and equalised two minutes later through Takagi. Suddenly Cerezo were not quite so interested in running down the clock and starting playing again.

It was Bando for the 11 minute hattrick on 87 minutes to give the visitors the lead after rounding Kaito and firing home. The away fans went nuts, as you would expect. Having come back against the odds once, I'll be honest in that I feared the worst at this point. Cerezo had only three minutes to hold on and I had no doubt they'd do all they could to not let us play. But credit where it's due (to us), we just did not stop.

We were in a hole but were not going to go down without a fight. Just two minutes after their third, a cross to the far post from Omae was met by a forward stampeding Takahara who headed powerfully, unstoppably home. The place erupted. Takahara and Cerezo keeper Kim Jin-Hyun both saw yellow after getting into an altercation when Kim stopped Taka grabbing the ball for a speedy restart. Fair play to Taka, he wasn't going to let such pettiness go unchallenged.

With five minutes stoppage time, the game was now flowing in our favour and a Bosnar header which was agonisingly straight at the keeper (he had little time to properly direct it) and a last minute counter attack when Eddy should have probably passed were both chances which might have brought goals, but the game finally ended up 3-3.

It was a frantic end to a game we maybe should have won, but after creating a mess, we did very well to come back. The referee was again poor and it effected the game, but our mistakes were our own. New boy Jong-a-Pin (nickname Kara, by all accounts) who is a left back by trade played as a defensive midfielder behind Ono and Edamura, and the big man had a good début. Confident on the ball, forward looking, he was rarely troubled when put under pressure. He looks like he's going to grow into a vital part of our team, and very pleased I am to see him in orange.

Away in Yamagata on Wednesday. I was half planning on going, but just can't make it, so I'll be watching on the box. Yamagata will be playing J2 next year barring a ferocious fight back in the next few months, so three points is a must. More goals, please Taka - with each one you're proving more and more doubters wrong, and I love you for it!

Yet to find any. Will add them as and when.

Hey Barry, thank you again for your efforts.


Is there no video footage of this game?

No, I'm still yet to find anything. :( A shame because it was the most crazy last 15 minutes!