With a free day to kill, I decided to make the short trip to prefectural neighbours Kofu. Seeing as they are virtually now assured a promotion spot, I figured not only would it be a nice day out, it would also be a chance to do a spot of recon work on what we can expect next season. Apart from the vomit-inducingly stinky portacabin toilets (which by the end of the game were spilling their contents onto the concourse) it was a thoroughly good day out. Kofu demonstrated, albeit against the worst team in the the country, why they are heading for promotion back to J1, with Havenaar bagging a hat-trick in front of an adoring home crowd.

Kitakyushu never really troubled the home team, and Kofu looked like scoring nearly every time they went forward. At five nil, they seemed to sit back and be content to play out the rest of the game, but even then they managed a 6th goal. Kitakyushu's defense was shoddy at the best of times. It's no shock to see they have a goal difference of minus 37. Being their first year in the J. league they'll surely improve over the next few seasons. 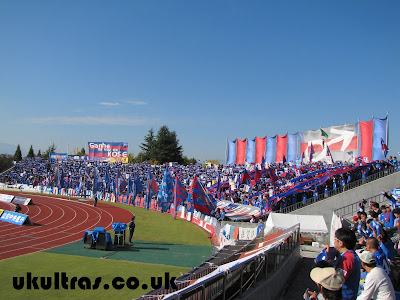 Back to J1 next season - Kofu

Speaking of the crowd, over 11000 were treated to the home team's biggest win of the season. Given that Kitakyushu's fans numbered only double figures, next season Kofu may well be selling a few games out. More home fans, plus a thousand or two from the visitors, next year should see a few bumper crowds for sure. This puts into perspective jubilo's home gate yesterday. You'd think seeing as they just fluked their way to a cup title a few more people might show up, right? No, they got a measly 7400, 4000 less than Kofu, and only a couple of hundred more than what we managed during a bloody TYPHOON. 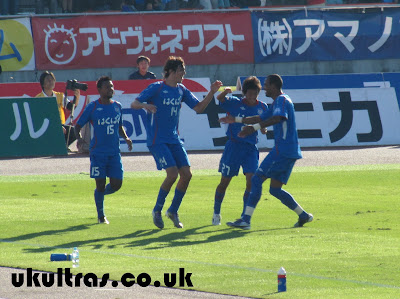 Anyway, today was about Kofu. I'm looking forward to visiting again next year, although not too thrilled about the distance between the end stands and the pitch. Another ground to rival the Banpaku and Todoroki for shiteness of view, and I'll be bringing a nose peg for the toilets. But at least it's another local team, so here's to a couple of good games with Kofu in 2011. J1 and J2 are entirely different prospects, as Shonan have found out, but good luck to Ventforet next year. Welcome back to J1! 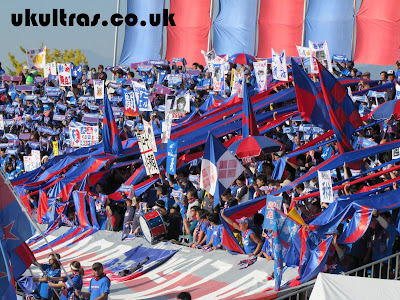 Over 11000 for Kitakyushu's biggest defeat of the year

Videos
Here's a cute one of the Kofu fans' goal celebration dance.