Three wins in a row? Blimey. This really has been a season of three halves. The first great, the second apocalyptic, and the third, well, pretty nervy but ultimately good. With this win we've as good as secured a top six finish, one better than last year, but with two games still to play and second place still in reach why stop there?! 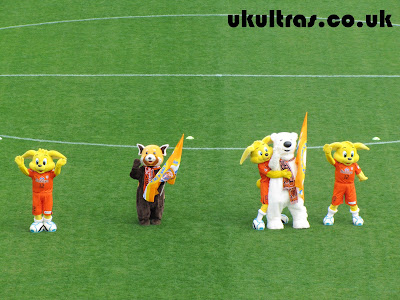 Ladies and Gentlemen - the J. League :)
We burst out the gates and had the better of the first twenty or so minutes and had a chance or two to take the lead before Hyodo was there to smash Omae's pass into the back of the net. I'll be honest, when he wound up to hit it I found myself involuntarily flinching given the high probability of it sailing in my direction. And I stand in the back row of the second tier. :-D To be be fair to him, it was a peach of a strike and keeper had no chance.

We extended the lead through Iwashita, who hasn't scored his trademark goal-from-a-corner for a while, so that was good to see. But then we spent most the rest of the game on the back foot. Hiroshima had God only knows how much of the possession, but just couldn't make the last ball most the time. 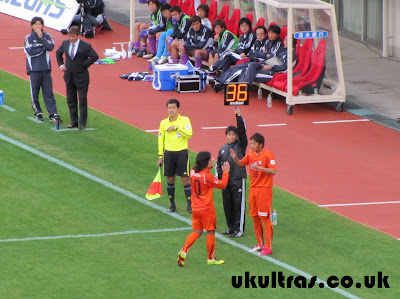 Out with the old? Sho Ito replaces Jungo
Just when they looked like they wouldn't be able to make the break through, they did, and it ensured a very nervous end to the game. Tempers started to flair and mistakes abounded, but we held on for the win. All credit must go to Nishibe who made a stunning one handed save at point blank range. He managed to turn a bullet header onto the bar and single-handedly (literally) win us the game. Top work that man.

Two games to go. Nothing but two victories is good enough if we hope to claim an ACL spot, and if we beat Kobe on Saturday they'll be relegated. Yes, the title has been decided (not Kashima for once!) and the bottom two teams are already down, but there's still some drama left in the 2010 J. League season!

Realistically, Antles will win the last two game as their opponents are rather weak. Let's hope for Gamba to lose their last two games so that we can get ourselves in ACL spot. Nice won by the Toyko FC by the way, this won has given them a boost to stay in J1. Go S-Pulse!

You're right there. In fact Gamba and Kashima both have a game against relegated teams meaning we just have to hope either one of them (and Cerezo) fail to pick up full points. Of course, we get to play Gamba at home on the final Saturday, so if all goes well this weekend, it could be a hell of a final day!