On a gorgeous Saturday afternoon third placed Urawa trekked out to the home of football in Japan, Shizuoka, for their biggest game of the season so far. Due to the prospect of a bumper Golden Week crowd, S-Pulse chose to stage this one at Ecopa. It was a decision that paid off as just shy of 39000 turned out to see the league leaders in action. The vast majority went home smiling like Cheshire Cats after Frode Johnsen rose in the 93rd minute to head home and claim three points for S-Pulse. His stoppage time header ensured we remain top of the table and extended our unbeaten start to the season to nine games - eleven in all competitions. 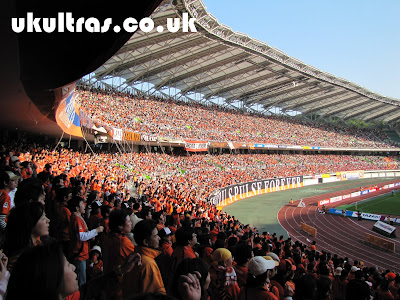 Not many empty seats to be found

The game, and the occasion as a whole, was a cracker. Both sets of fans were in full voice as two teams with genuine title ambitions had the opportunity to stake their claim over the other. Within seconds of the start both ourselves and the other lot had had shots on target and it was clear the game was going to live up to expectations. The thing is, games like this are all well and good for the neutral, but for supporters of either team it means ninety minutes of heart-stopping tension and goal-mouth scares.

Okazaki opened scoring from a corner, glancing a header across goal and into the far corner. Our celebrations didn't last too long though. Five minutes later Ponte repeated his feat of the same fixture last year, firing it home in front of the home end. Nishibe got a hand to it but it wasn't quite enough. Not long after, a poorly timed sliding challenge by Yamada led to lengthy treatment for our keeper. He managed to play on till half time, but was suffering from concussion and so was substituted at the break for youngster Takeda. 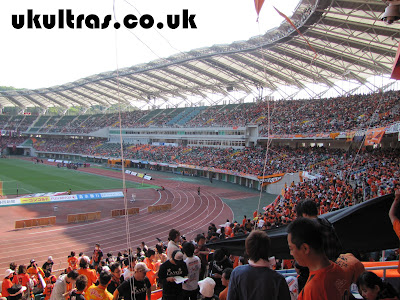 An hour from Shimizu, but the orange army was out in force

Ono went achingly close to restoring our lead, once directly after skilfully avoiding a defender and shooting just wide, and once with a world class pass into Okazaki's path who just failed to chip to advancing keeper. So it was all square at half time, a scoreline probably more suited to the away team.

The second half was equally anxiety ridden, and with the chances coming less frequently it was evident that one goal was probably going to win it. When we hit the bar in the 92nd minute that looked like our time was up and we'd have to settle for the draw, but cue the big Norwegian to pop up and head home from point blank range. 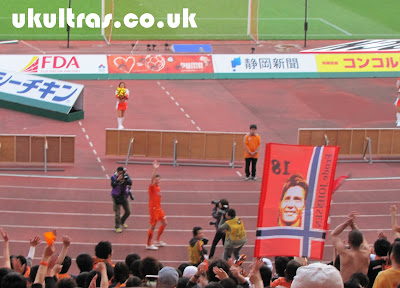 The hero of the piece

I've not known an explosion of delirium on the terraces like that since Cho Jae-Jin's stoppage time winner against Jubilo back in 2007. Being a home game with 35000 orange-clad maniacs in attendance, the noise when Johnsen's 93rd minute header hit the back of the net was something incredible. The goal won us all three points and maintains our place at the top of the table.

Onwards and upwards - next is Kyoto away on Wednesday. On the road the first priority is avoiding defeat. If we can play a tight game and stay top, then it's home to Niigata next Saturday. The games can't come quick enough!

From a personal cam, Okazaki's opener:

Just fxxking awesome, unbelievable. The good team always have the timely goal!!! Good to see they never willing to settle a tie and keep pushing in the final minutes. Great great win and I am just so proud of them. Barry san, how is Fuz san and her baby doing

Oh and I forgot to ask you, why the game played at Ecopa stadium this time......... they share this stadium with little Jubilo right....... And do you know why the goalie was substituted during half time (sorry my question mark key is not working)

William! Me and the baby are good, she is nearly 6 months (far too big in my opinion). We have our first game scheduled for the derby. I'm teaching her the songs ;)

And, I reckon the game was at Ecopa due to capacity - 40,000 people went, but the 'Daira only holds 22 000 I think. We use Ecopa for the bigger games, I remember we played Reds there last year.

re: the keeper, not a bloody clue. :D

Yeah, it was a stunning end to cracking game of football. With Ono in the team we have so much more to offer than last season, and the 11 game unbeaten run is evidence of that.

As Fuz said, the game was at Ecopa to take advantage of the bank holiday weekend crowd. Nearly double what could fit in Nihondaira turned out, and the vast majority went home with smiles that will last for days. :)

Nishibe got a hard knock from Urawa's number 6, Yamada, in the first half and although he carried on until half time but he was taken off as he actually had concussion. He should be OK for Wednesday's game.

There is another reason why Ecopa. For SECURITY. In spite insane Reds supporter tore S-Pulse supporter's banner and dropped it at Nihondaira stadium several years ago, because S-Pulse defeated Reds.

What a fantastic game it was!
When Frode Johnsen got a goal,the sense of unity of the stadium was very great.
Because I was able to watch a game of such a splendid game, I am very happy.

Yujiro, I didn't know that. Another reason to hate them. :)

Thank you for your comment. Yes, I'll remember the moment Johnsen headed that ball into the net forever. Is was an amazing end to a very exciting game, and I'm so happy we could beat Urawa again!