An excellent result away in Saitama, and the second time we'd beaten Urawa in the space of five days. Kingdom Shimizu!! 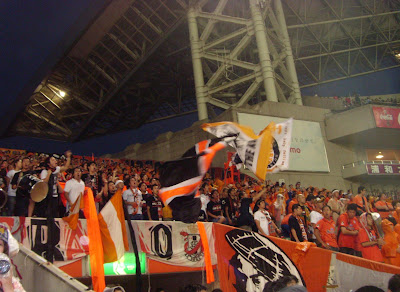 A small section of our travelling barmy army

Our goal came from Edamura on 70 minutes, and we had a number of golden chances both before and after to create a bit more of a cushion, but as it was we went into the four minutes of stoppage time hanging on for grim life. Urawa could, and should, have scored at least once, but a lack of real teeth up front cost them, and as their fans concentrated on booing Okazaki, their side slumped to it's fourth defeat in a row.

Things were looking more and more panicy as the stoppage time minutes ticked by, but hang on we did! Together with the defeat of Gamba Osaka, this caps an excellent four weeks. Apart from the hellish stoppage time equaliser we conceeded to Kyoto, it's been a top month. We were unlucky not to beat Kashima, but we've picked up away points at Chiba, Osaka and now Urawa. Not to mention to progressing to the semi finals of the cup!

Life it never dull on the S-Pulse side of life, and now we have a well earned weekend off while the J. League v K. League All Star game takes place. I'm not especially sad to report no S-Pulse players are involved. The lads all deserve a weekend to themselves. 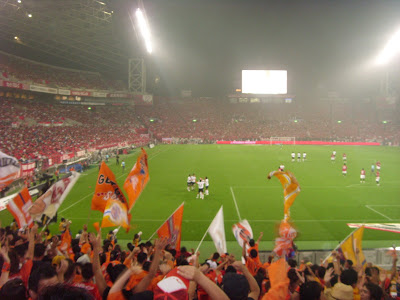 Moments after our goal
Next we face high flyers Albirex Niigata who will be a stern test. Niigata have both conceed the second least and lost the second least in J1 (both behind Kashima, rather predictably), so will be a very tough opponent. Unbeaten at home for well over a year, I'm confident we can turn them over, and in the process do the double over them - of only three defeats this year for Albirex, one was at home against us.

As for today, top job boys! You made a trip out to Saitama totally worth it. :)

The last minute of stoppage time:

And finally, from down Oita way, the greatest escape from J1 this season so far!

Wow. Just wow! Ex-Pulser Fernandinho set up the equaliser, but surely Oita have left it too late to save their J1 skins?
Posted by Barry at 1:36 pm

Really good game in Saitama!
Tsuzuki had a great day, but the goal was...funny :P

Otherwise, you got a full number 1 behind the posts?
Sometimes Nishibe, sometimes Yamamoto...
will there be an end of the changing?

All the best to Shizuoka
Ben
SUPER Avispa!

Both Okazaki and Takaki missed golden chances to put it beyond doubt, so it was a very nervy last five minutes.

Our regular starter between the sticks in Yamamoto, but he was injured at the start of the season, so Nishibe stepped in.

Of our four losses this season, three have come with the latter in goal. It is no cooincidence. Yamamoto is different class, and at only 24 he's got many years ahead of him - hopefully with us!

Sorry to see Avispa not doing so well - maybe next year?

Ah Nishibe... that man causes me pain! I live for the day when Kaito is always in goals...

Good win!
Hey, a few of the English bloggers are planning a footy "summit" for the end of the season (maybe Nagoya) and I'd like to send you some details.
If you're interested can you send me your email address?
Cheers.

My email is barryvalder AT hotmail DOT com, so please send my some details there. :) I can't commit to anything this far in advance, but it sounds like a fun idea!