Just when we threaten to put a run together capable of closing the gap on Kashima we go and let three points slip through our fingers in the most infuriating of circumstances. Yeah, I'd have probably taken this result before the game, but going into three minutes of stoppage time 1-0 up we conspired to give away countless free kicks and hand a share of the spoils on a plate to the home team.

The string of free kicks awarded by the ref ultimately culminated in a foul perfectly positioned for an excellent cross to be swung on to the head of Ito. He put it home and Iwashita's opener was cancelled out. Kawasaki had been all over us for the final ten minutes, hitting the post once and making Kaito work his hardest as they swarmed all over our half of the pitch, so the goal wasn't a great surprise.

Kawasaki have to next face Kashima, Urawa and G. Osaka in three games which will pretty much make or break their season. As for us, we have the (on paper) less daunting prospect of Omiya, Yamagata and Kobe. All winnable, and if we hope to make an ACL spot, then we pretty much have to take maximum points from them. Before all that, it's FC Tokyo in the semi final of the cup. Home on Wednesday, away on Sunday.

Click here for The Rising Sun's report of the evening. In my report above I held my tongue regarding the free kick which led to the goal as I didn't want to sound like it was just sour grapes talking, but Matsu at The Rising Sun clearly had an issue with it too. It certainly felt like we were giving away a crazy number of free kicks in stoppage time, and maybe I wasn't just being paranoid after all...

Further to my above comment about the free kick, I just found this video which shows first, Ichikawa getting called for offside when he was a good yard or two onside, and then second, Okazaki getting penalised for that foul. Hard to see too much without a replay, but any contact seems pretty minimal and the Kawasaki player went to ground only when it was apparent the ball was getting away from him:

Just to be clear on that "offside": 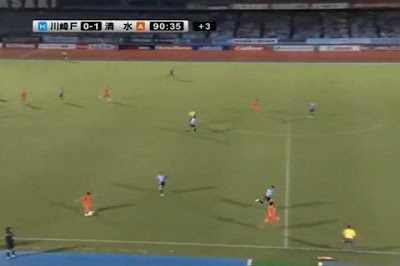 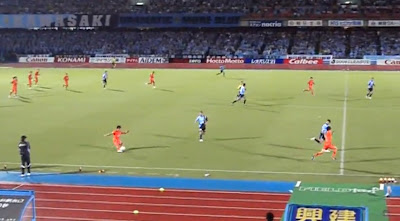 Not only is he clearly onside, he's in his own half! In this video you can see Kenta's reaction who is right behind the linesman and had the same view of it. I'm not sure I subscribe to the crooked official theory, but both this and the free kick appear to be very poor decisions by the linesman and the ref. Very bad officiating by rookie referee Masaki Nabeshima, and these mistakes changed the outcome of the game. Permission to feel hard-done-by?

We deserved nothing from that. Now I see why Chong was dropped - barely had a meaningful touch all game. Poor old Yajima!

I think the only winners tonight were Kashima. We're left reeling after losing a win at the last minute, a pretty poor performance for 80 minutes by your lot, and a bruised and swollen right hand for me after punching the desk when you equalised. :-D

The last ten minutes you were all over us. Possession must have been 80-20 or something similar and I lost count of the number of fouls we gave away.

No doubt who was playing the better football for the vast majority of that match. I think you lot have worked out that if you don't let us counter-attack we can be made to look very ordinary.

I actually thought you were beginning to run out of steam around the 70-minute mark. The arrival of Renatinho certainly gave you a bit more to think about. Then Kengo starts giving the ball away uncharacteristically cheaply and it's 1-0. I'm just glad he got the chance to make amends.

I'd say if you guys are left reeling then we had a pretty good day too ;-)

Incidentally regarding Wednesday, I'm thinking if I can't get onto a bus, what I may do is take the regular train to Shizuoka and take the Shinkansen home. Game ends at 9, last train is 10:24. Would I make it in time?

Well, the last time we let three points slip we won the next two games with an aggregate score of 6-1, so while I may be feeling sorry for myself, the players will surely bounce back on Wed and Sun! :)

As for making that train, yeah, you *should* be fine. If you jump on a Shizuoka bound shuttle bus right after the game you should be back to the station around 10.

Being the cup and a week night it shouldn't take that long to get away from the ground.

point. Hey, if I make it out there, would you be interested in doing some sort of banner exchange between our two sites? To commemorate the Apathy Derby ;-)

That one is absolutely on site, very unfortunate for our team but as you said, we will be facing 3 weaker team next. Let's hope our boys will beat the FC Tokyo and carry the momentum and beat next three games of the regular season.

that was 3 points that slipped away... kawa got lucky there... now for fc tokyo...

Oh my god! Terrible offside decision! Thanks, I will spread the word on this one. As for the free kick, Okazaki pulled him back by the shoulder VERY slightly, NO way enough to send him down - but he went down and Okazaki can't complain as he DID "impede" however slightly.... ! NOT OFFSIDE!

Well, it was Juninho so I guess we expect nothing less. Good riddance. Hope he never plays in Japan again.

And the phantom offside? Absolutely shocking decision. Ichikawa was clean through having beaten the defender.