A game we could have won. I've never seen a referee so trigger happy with the cards, and both teams suffered with a red card each. In what was far from a dirty game, I lost count of the number of free kicks awarded.

We opened the scoring with a trademark header from Okazaki. It almost tore a hole in the net and takes Okachan up to joint leading scorer in J1 with 11. 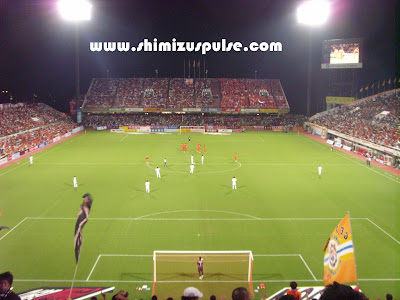 Another full house at Nihondaira
Niigata fell victim to the first of the red cards on 43 minutes when defender Gilton saw red after a second yellow. We were able to take advantage of the extra man and we rained down chance after chance on the Niigata goal. We had nearly three times the number of shots, and had six times the number of corners as the visitors, but time and again we were too sloppy in front of goal.

We paid the price for not making the most of our pressure when a stunning free kick from Márcio Richardes levelled the scores on 76. We still had the man advantage, but not for long. Two minutes later Edamura was sent off, him too for a second yellow.

After that, Alibirex looked more and more dangerous, but the clock ran down and time was up. It finished all square; a result neither team will be especially happy with. Albirex lose more ground on second place Kawasaki, and we miss the chance to go fourth.

Right after Okazaki's header, in the melee behind the goal:

A video of our wall of colour pre-game with a stunning view of Mt. Fuji: