The recent unveiling of our new kit reminded me of two polls I saw online last November. The voting took place over at the English language World Soccer News Japanese football forum, with the goal simple enough; to find the best ever J. League shirt, and the the worst ever J. League shirt.

So who should walk off with both honours? None other than our very own S-Pulse! Yep, we won both the best and the worst shirt award. So let's have a look at the competition we beat off to claim these crowns.

All images are from the excellent Rising Sun website which put the time and effort in to find them, upload them, and to run the polls.

The Best Ever J. League Shirt

There have been some classic shirts over the J. League's short history. The full poll for best ever kit, and competing shirts can be found here. Here I present my pick of the candidates:

Kawasaki Frontale (2008) - This came in second, but lost out to the below

The Best Ever J. League Shirt Award Goes to...


Lovely effort from S-Pulse, and it took 22.5% of the total vote. If only I'd been in the country a year earlier I could have had one of these for my own!

The Worst Ever J. League Shirt

Well, now let's have a look at the J. League shirt hall of shame. There are some real works of art in the full poll which you can look at here. Again, here's my pick of the action!

The Worst Ever J. League Shirt Award Goes to...


Gloriously terrible! With a whopping 40.7% of the total vote, our 1993 away shirt trounced all opposition. What the designers were thinking (or what they were on) when they dreamt up this little beauty, I'd dearly love to know. If anyone has one they want to sell, do get in touch - I want one!

There have been complaints from some of our fanbase that 2009's kit is too simple, too basic, 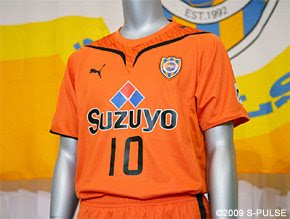 lacking individualism. Well, for a group of supporters who have grown up with the above shirts, I can, to a certain degree, see their point.

The trend towards simplism is fine, but here's hoping that five or six years down the line we see a return to the garish and outlandish shirts of the mid nineties.

In the meantime, hold your heads up high S-Pulse fans, and wear your 90's shirts with even greater pride than usual - they're award winning!
Posted by Barry at 8:53 pm

They need to make an S-Pulse tartan shirt just for me.

Bright orange tartan - come on S-Pulse, it has to be done! :)

And yeah, even the "best" shirt isn't that great, but I so want us to go back to the map-of-the-world style for next year!

Hello there, I'm a French fan of Shimizu since 2005. I actually have the shirt that won the best shirt award (2002), and while it's really great looking, it's a bit frustrating because I can't wear it. Why ? Because the sponsors on this shirt (and on all the shirts from the 1997/2001 period) are fragile : they "burn" when you wash them (you can see that on some pictures of supporters, or on some old shirts sold on yahoo auctions). So, it's still good for collection, but if you ever get one, take care with the washing ! ;)

Thanks for your message. I've actually seen what you talk about on some of the shirts around Nihondaira. It's such bad design, isn't it!

I would like to get my hands on a classic old shirt, but if I do I'll be careful with washing it!