And that, as they say, is that! S-Pulse beat Gamba 3-2 on the night, 4-3 on aggregate, and we're off to the Kokuritsu on November 1st!

S-Pulse's route to the final after winning Group B (picture from official J. League site)
What better way to spend a lazy Sunday other than mooching around the S-Pulse Dream Plaza, stuffing your face with curry, watching films and shopping? Despite the over-riding football theme of the whole area, such was the sterling job my better half did in keeping my mind off our semi final second leg, that when five o'clock rolled around, I'd almost forgotten there was a game to watch! So it was that I walked round the corner to the S-Pulse Dream House to meet Fuz and Takumi and claim our seats in front of the big screen. Despite getting there two hours early, the place was already filling up, and by kick off a crowd well into triple figures steeled themselves for 90 minutes which would make or break our season.

We didn't have to wait long, as a stonking strike from Yamamoto on just three minutes curled past the beleaguered Fujigaya to cancel out the away goal advantage Gamba held. From that moment on the impetus was with the visitors, and even after Roni had made the most of a slack piece of defending from Aoyama to draw level, the momentum was still clearly with S-Pulse. Knowing a second away goal would leave Gamba with a mountain to climb, we kept pressing and went close on a number of occasions. Like the home leg, we were often left frustrated, and going in at half time still level had a lot of us wondering if just wasn't going to be our night.

We needn't have worried so much. As news of an Oita victory in the other semi started to filter through, within a minute of the restart Edamura put it past two defenders and Fujigaya to send the travelling hundreds, and the thousands watching back in Shiz, into raptures. Ten minutes later it was that man again as Edamura put us 3-1 up. Dream House descended into euphoric bedlam as we knew this goal now meant Osaka needed to win 4-3 to get to defend the title they'd won last year. It was a long half hour, and with Gamba throwing everything they had at us, they inevitably pulled one back on 79 minutes. But it was far too little, far too late, and they knew it. With their front line of Lucas and Roni getting increasingly frustrated, they both saw yellow before the ref put them out of their misery. After four minutes of stoppage time, it was all over - S-Pulse are heading to the Nabisco Cup final for the first time since we won it back in 96! 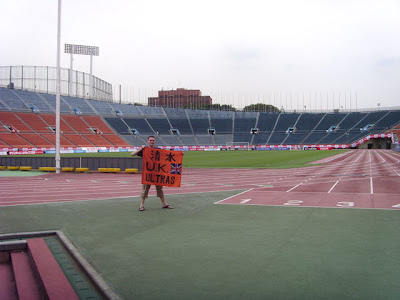 Flying the flag on a previous visit to the Kokuritsu
We'll face a team who have surprised many people this year, Oita Trinita, in the final. Currently sitting level on points with Antlers who are second, Oita, who only joined the J. League in 1999, are going for their first major cup. While Oita fans have to travel all the way up from Kyushu, we're a mere hour on the bullet, so watch out Tokyo - 20000 Shizuokans are coming to town, and we fully plan on homejacking the national stadium! With the final only seven days before the away derby with Jubilo, the possibility of victory in Tokyo followed by a gloating chance in front of the sky blue toe-rags is almost too much of a mouth watering prospect to take!

This video is from the Kyoto home game a couple of months back, but adequately conveys the feeling around Shimizu last night!

It was a hell of a game, and we fully deserved the win. I'll be adding some highlights as soon as I find some online, but for now here's a video of the last thirty seconds as taken at Dream House: