El Loco and The Flag of The Kings. S-Pa's Victory Dance!

There is a near inexhaustible array of chants and songs down at the 'Daira, and at any visit you will hear an endless cycle of the songs from kick off to final whistle and beyond. There are three lists which they get drawn from: Team songs, player songs and victory songs. The first list has been built up steadily since we joined the J. league in 1992 and grows annually thanks in no small part to the band which sets up camp behind the goal and plays non-stop all game. The second list fluctuates annually, but the last list has been the most steady of the three.

The Victory Songs list is only two long, but of all our many chants, they are two that every S-Pulse fan needs to know. The first is Oja no Hata and, as it has been for years, is performed after every home victory. The latter of today's songs always follows it, but is also taken on the road, as any team beaten at home by S-Pulse will testify!

Oja no Hata (The Flag of The Kings)
Loco Loco

王者の旗 (The Flag of The Kings)

The first is the official club song and is called Oja no Hata - translated best (to my mind) as The Flag of The Kings. As can be seen in this video, it's a good old fashioned scarves-aloft sing-along family favourite which wouldn't sound out of place as a national anthem:

The lyrics too are full of thunderous passion and glorious imagery and they can be found along with the full score here. However, for non-Japanese speakers, how on earth can you be expected to join in? The answer in simple, for someone (me) has sat down and transliterated it into English! So print this page off and take it along to Nihondaira. There you can amaze your fellow S-Pa fans with your awesome Japanese singing skills!

王者の旗 Oja no Hata
(The Flag of The Kings)

And if that, when sung by thousands of fans with flags-a-waving and fireworks exploding all around, doesn't get the hairs on your neck standing up, check your pulse, because you just may be dead. Now presented here, for quite possibly the first time ever anywhere, is an English translation of S-Pulse theme song. A couple of notes first, though.

1) This is entirely my own interpretation of the lyrics and their meaning in Japanese. I'm not a native Japanese speaker by any stretch, so any missed nuance or misinterpreted lyrics are entirely my own mistake.

2) A lot gets lost in translation, and while I tried to stick as close as possible to the original lyrics, a too-literal translation sounds both unnatural and fails to scan. To ensure the lyrics in English fit the music, (and where possible, rhymed!) I took a fair amount of poetic license.

王者の旗 Oja no Hata
(The Flag of The Kings)

Did you see as I saw, the fire in their eyes?

Did you see as I saw, their courage never die?

Run out fast and strong, to the rhythm of our heart

Dancing high, flying proud, it’s The Flag of the Kings:

Did you see as I saw, eleven heroes fight?

Did you see as I saw, courage, spirit and light?

Raised up for all to see, under Shizuoka’s sky

With the flames from in our soul our flag burns bright

Soaring high ‘round the world is The Flag of the Kings:

Dancing high, flying proud, all our dreams are brought to life by

The Kings of S-Pulse!


Run it past the music a couple of times, and it doesn't sound too bad, if I may say so myself! So now you just need to learn the words and sing along with each victory party! There is however another song you simply have to know, and that brings us nicely onto... 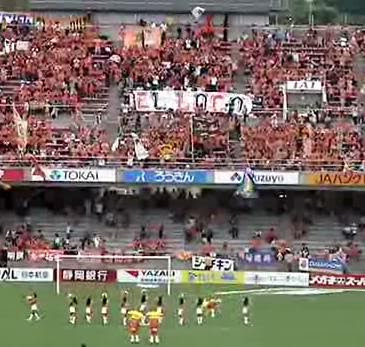 Anyone who's been to an S-Pulse game will be aware of the overriding Latin influence which infuses each song, chant and gesture of the S-Pulse hardcore. Of the many different chants, one which was born at the start of the 2008 season and comes straight from the Spanish lexicon has become the new signature song of S-Pulse - Loco Loco!

The chant has been borrowed from Sãu Paulo FC of Brazil's supporter group Loco Loco Independente. A video of the original version can be found here. There are two version of Loco Loco (Japanese: ロコロコ roko roko) us S-Pulse fans sing. The first is sung during the game and goes a little something like this:

The above is accompanied with frantic pogoing, and here's how it looked on the road, away at Kashima in 2010:

This is all well and good, but the real beauty of Loco Loco comes after the final whistle when S-Pulse have secured another three points. Before our regular victory song of Oja no Hata, we Loco it up one more time.

It's the same song, but this time you join arms with your fellow Oranges and sideways conga along your row. After each Meu Campion, Ole! and Independente! you change direction - simple! One recent addition to the performance which made it's début at the Sapporo home victory is that everyone crouches down during the clapping before springing up into the conga, thusly:

It looks bloody awesome, I'm sure you'll agree. :) Loco Loco has been seen on the road up and down the country this season and with all thoughts on the Nabisco Cup Final on November 1st, all many S-Pa fans want is to Loco Loco around the Kokuritsu! A quick You Tube search reveals many other examples of our new theme song, so watch a few, then get down Nihondaira or the national stadium to join the most enjoyable victory dance in the J. League! 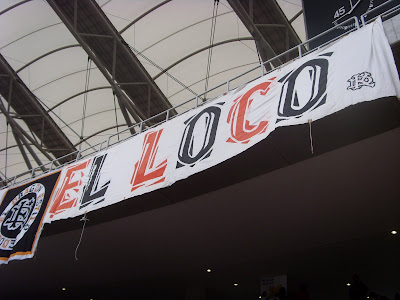 Ah, I didn't know that! Thanks for the information, I'll add it to the article. :)