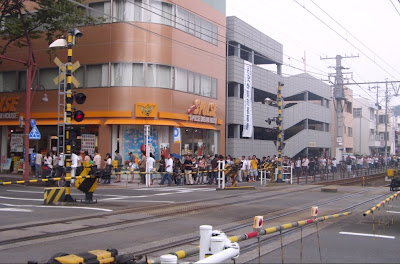 Two hours after doors opened the line was still huge - a scene repeated around the other S-Pulse shops
With the countdown to the Kokuritsu well under way, cup final tickets went on sale to S-Pulse fan club members yesterday morning, a day after going on sale to Oita fans. Presumably the one day discrepancy was intended to give Trinita supporters a head start to balance the fact that, come November 1st, they'll be travelling just shy of 500 miles! For the majority of us Shizuokans, it's a far less daunting prospect of a mere 100 mile hop, skip and jump up to Tokes. As expected, the demand for tickets from S-Pa fans has been huge. As of 11am yesterday, fan club membership card holders were entitled to buy up to a staggering NINE tickets each. With seemingly everyone using their full quota, after just 90 minutes the state of play looked something like this: 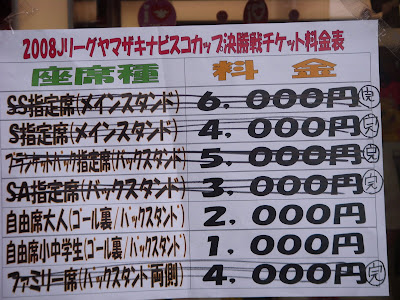 With that meaning this: 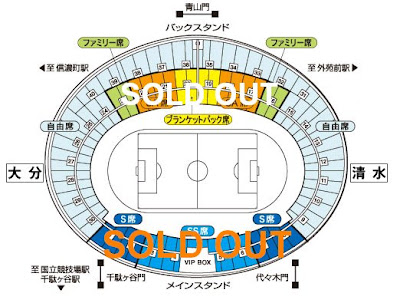 The only tickets left available are the 2000 yen seats in the light blue unreserved zones. S-Pulse will be occupying the 'away' end on the right of the above diagram. By all accounts there are not a great number of these remaining, so by the time tickets go on general sale on Saturday (September 20th) we could be looking at a total sell out of the S-Pulse end. Tickets are already appearing on Yahoo Auction, so feel free to buy one of those, and then bop the seller on the nose for their bare-faced profiteering.

If Oita fail to sell out their allocation, and I don't doubt for a second that S-Pa fans will start buying up any remaining free zone tickets, regardless of the fact they're for the Oita section. The official information from the J. League can be found (in Japanese) here. It's worth noting that users of the Pia service can pre-save tickets from tomorrow. Other than that, get down your nearest club shop or Lawson, Family Mart or Circle K on Saturday!

Here was the queue outside the Shizuoka branch of the S-Pulse Dream House around 12:30pm on Sunday. At 10am it had been nearly four times as long...