Homejack The Yamaha! Banner from the One Person One Flag Project (jp)
Another day another newly learnt Japanese English word - Homejack! This was a new one on me when I read it yesterday, but the meaning is simple enough: to take over an away ground and make it a home game. I'm sure Fuz is more than used to this following Rangers; their travelling army swamps pretty much any ground it visits. So far as S-Pa go, it never fails to impress me how many of our fans travel, but apart from the away derby, I can't say we ever come close to outnumbering the home fans. However, this Sunday we're going for it - let's homejack the Yamaha and paint it orange! 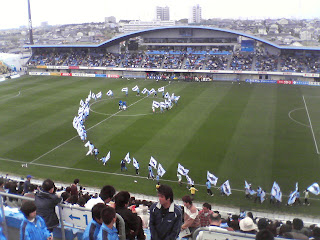 A quaint little stadium somewhere outside Hamamatsu
On account of Jubilo's Nabisco Cup hopes hanging by a thread and S-Pa's route to the quarter finals already assured, it won't quite be quite the cauldron atmosphere it might have been. Still, a decent enough crowd will be turning out - lets hope over half of them are in orange! I'm going to stick my neck out and predict a 13500 crowd to witness a 2-0 S-Pa win with Genki Omae getting both! As with the home leg, we're missing a handful of players due to international call ups and injuries, and I hear Aurelio won't be playing, so I don't think we'll get a more perfect chance to give Omae his first start - and his first goal! 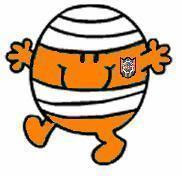 Okazaki after getting crocked in Toulon last week
I've never been to the Yamaha to watch S-Pulse, and I won't be alone in this fact since it's our first game there in six years. I can only imagine what the atmosphere was like back in 1999 when we played there in a title decider. Sunday's Nabisco Cup antics will be a world away from those kinds of stakes, but as ever local pride is on the line, with the chance to beat Iwata in their own back yard. Doing it at Ecopa with a stoppage time winner (ah, memories...) is one thing, but for the first time in eight years we have the chance to do it at the Yamaha - let's have it!!
Posted by Barry at 2:35 pm

Trying to think of an away game other than Celtic park where we haven't homejacked.... not coming to mind! Lol. Bring on the yamaha, useless Jubilo minions! wahahahahahaa

(yes, I may have been boozing)

Shameful showing by your guys =P What happened?

Think it was just a case of knowing we were through so we lacked any real urgency. Annoying though, as we took a good few thousand up for a pretty meaningless game so the least they could have done is won it!

I wish you'd scored two more, as it would have meant we'd have joined the easier half of the cup! As it is we now have Antlers followed by Gamba or Marinos! :-O

That and clearly, we wuz robbed, right Shizza? Should've had that penalty...