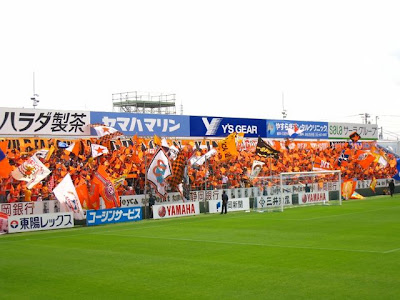 S-Pulse roll into Iwata
With our route to the quarter finals already in the bag, you could argue that we had little reason to even turn up against Jubilo. You could also argue that losing 2-0 meant nothing, as had we won 5-0, Group B's final standings still would look exactly the same. You could argue these things, (yes, we are through as group winners - yes Jubilo are out) but try arguing that to the thousands of S-Pa fans who ventured into deepest, darkest Iwata yesterday. In the terms of the competition it may haven been meaningless, but so far as local pride goes, a derby is a derby, and getting beat hurts like hell. 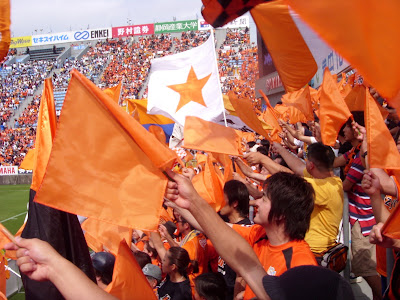 There's really not a great deal to be said about the game. Jubilo wanted it more, we were lethargic and made stupid mistakes which gave them the chances they needed. 2-0 at half time, Nishizawa went closest ten minutes into the second half but Matsui did excellently to get down low and deny him. After that it felt like the blues were just playing out time, and we never looked like coming back. Again Omae was put on with ten minutes to go, again far too little time to have any impact, and when the whistle went, the Jubilo fans predictably started bouncing around like loons. Fair play, it was their first derby win since 2006, and with us comprising a good 35-40% of the crowd, they got to rub our our noses right in it. 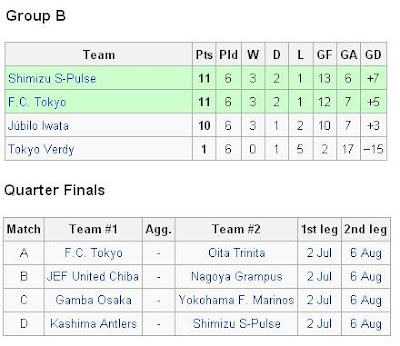 The result was a sickener, and especially so because it played out with such a terrible sense of inevitability. A team which knows it can afford to lose invariably will lose, and as we knew was the case before kick off, it made not the slightest difference in the bigger picture. Still, to allow Jubilo to end their run of four straight defeats is frustrating to say the least.

Well, onwards, upwards and on to the quarters! We now face Antlers who, along with Gamba, join the competition having been tied up with the Asian Champions' League. Why Antlers and Gamba didn't get paired with the two best runners up is anyone's guess, and so Tokyo who finished behind us are rewarded with the far less intimidating prospect of Oita Trinita. Still, no complaints. The cup's the cup, and you can only beat who's put in front of you, as we will - home

and away - with Antlers. Bring it!!

In other news, playmaker Fernandinho has seen fit to leave S-Pulse for Kyoto Sanga. On the surface, this is a pretty odd move, with newly promoted Kyoto certainly looking no better than S-Pa so far this year. We at least have been under-performing thus far, and while I can't speak much for Kyoto, I'd put money on us finishing a good few places above them come December. All I can imagine (and this is pure speculation) is that for whatever reason he wants to be back near Osaka where he started his J. League career. Either way, we're going to miss all the work he gave the ball boys with wayward shot after wayward shot... Nah, seriously, it's a big hole behind the front two, and I'm anxious to see how we fill it. Just to make it interesting, guess who our next league game is against on June 28th? Seriously, you couldn't write it better!
Posted by Barry at 10:39 am