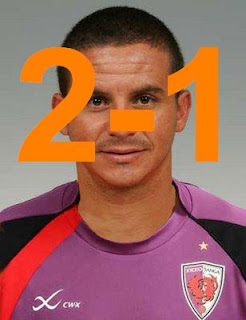 The month-long J. League break was brought to an end on Saturday, and not before time. Fortunately, for some of us at least, we had shenanigan-filled holidays in Ireland to help pass the barren, football-less weeks. Still, with the footer back on Saturday, so it was that I dragged my jet-lag riddled body out of my futon and off to Nihondaira. After a week in the British Isles' breezy sunshine, Shizuoka's humidity takes some getting used to, and as we head into summer's muggy, sweaty heat, it's great to know that the next five or six home games are all evening starts.

When attacking midfield lynchpin Fernandinho signed on loan for Kyoto last month, it was with a classic twist of footballing fate that they should be the very next opponents down the 'Daira. Predictably (and rightly) he was warmly greeted with a crescendo of boos each time he got hold of the ball. No doubt it just made it sweeter for him when he knocked the ball home to make it 1-0 to Kyoto three minutes after half time. Kyoto are playing him as an out-and-out striker it would seem, and to be honest I think they'll be missing out on a lot of what he can do in the centre of the park, but then what I know? And what do I care? His loan is up at the end of the season, and while I'd like to think he'll come back, knowing how many of these long-term loans go in the J. League, I can't see it. Not unless Kyoto get relegated that is...

It didn't take long for us to draw level, and it was Edamura who did the honours with a precisely placed shot which went in off the post. We'd given Aurerio his first start for a while, but he didn't ever really trouble the keeper, and when he was taken off on 78 for Hara it was no surprise. What was a surprise was the impact Hara had on the game. As soon as he was on the pitch he was harassing the Kyoto back line and it was his battling which earned us a free kick on 84. Jungo swung a perfect ball into the box where the Kyoto defence was only able to help direct Hara's half-volley into their own net. 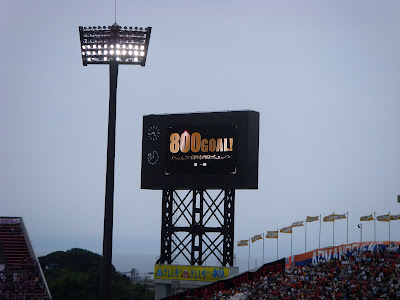 After that there was a couple of hairy moments where Kyoto went close, in particular when they had a one-on-one, but they failed to hit the target. Their travelling fans will no doubt feel hard done by given their superior number of shots, but that's been the story of a lot their season so far. If Fernandinho can turn things around remains to be seen. He was taken off with 25 minutes to go, so sadly got to miss out on our winner. :) So far as we went, we weren't wholly convincing, but three points in three points. Marcos Paulo looked slow, clumsy and not entirely interested. He was taken off at half time for Hyodo. So yeah, anyway, we're up to twelfth but not far off the ACL positions points-wise. Next up is Antlers in the cup which I'm not relishing given their 4-0 away demolition of Nagoya on Saturday! Still, let's have it - get a draw there then it's all back to 'Daira next month - bring it!
Highlights: