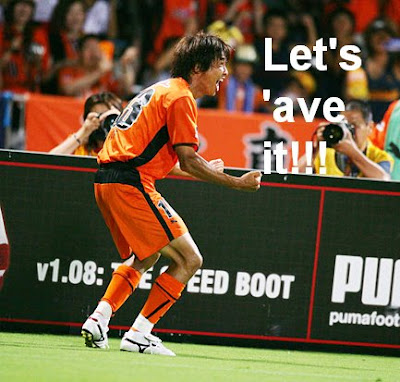 So that would be the best team in the country? The team that won the double last year and are sitting top of the table looking likely to retain their crown? Yeah, well woteva - we just dumped them out the cup.

Having beaten them in the league earlier this year, and holding them to a goalless draw in the frst leg of this tie, it's becoming something of a habit see off the Antlers. Kashima played by far the best football any team has bothered to at 'Daira so far this season, and to be fair, it paid dividends, with a whole more shots than the home team. Nishibe was tested a few times, and had to be at his best once or twice, but for all the possession and shots, Kashima rarely looked like they were going to get the second strike which would have put them through on away goals. After their goal came on 57 minutes, it was a nervy last half hour, with the last ten minutes in particular lasting what felt like forever. Saying that, we went close a few times with one-on-ones, and a ball cleared off the line. It was a cracking game, and had I been a neutral, a whole lot more enjoyable, probably! The tension was mad, and the sense of relief in thr ground can be heard on the first of the videos below.

We were missing usual starting members Honda, Okazaki, and Jungo last night which clearly had an impact on Kenta's starting eleven, but apart from Aurerio who was as much of a threat as a lame duck, the team worked their socks off. It's not that Aurerio doesn't try, it's just that he can't seem to cut it at this level. Not surprisingly, he was replaced with Hara on the hour. Special mention should go to Marcos Paulo who is a different player to the one who made his début a couple of months back.

Beating Jubilo comes first, with doing Antlers coming in a distant second, but seeing them off tonight was fucking magic. Next up are Nabisco Cup holders Gamba home and away. Not the easiest of prospects, but one we have no reason to fear. Let's 'ave it!!