S-Pa's Young Lions off to Beijing 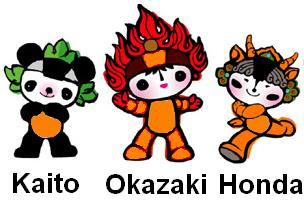 With the Beijing Games now only a matter of weeks away, the Japanese Olympic football team has been announced. S-Pa's wealth of young talent has been recognised, with an unmatched three players included in the eighteen man squad.

Goalkeeper Kaito Yamamoto rarely sees first team action all the time Nishibe is around and fit, but on the one or two occasions I've seen him, he's a solid keeper and a great prospect for the future. Honda has stepped up from university to professional football this season with ease and has proved one of our better close-season acquisitions. Okazaki has seen a fair amount of action with Kenta's forward line differing from game to game. He's young, hungry and the Olympics is going to be a great experience for him.

Kaito, Okazaki and Honda - Shizuoka's proud of you, now go get gold!
Posted by Barry at 9:03 pm

Okazaki should've been the panda ;)