September 23rd 2007. 2-0 away at FC Tokyo, going into the final minute of stoppage time. That was the last time I left early.

When I looked up from Angry Birds (apologies, but I'd already checked out at 4-0) to see Marquinhos poke home his hat trick, I was down the stairs and out the back before I knew what I doing. An involuntary reaction at witnessing something just too painful.

For the ultimate horror of the final scoreline, the game didn't begin all that bad. Nakamura's corner deflected home by Bare wasn't an ideal start obviously, but until the second goal (where time seemed to stand still as Hyodo stepped through our back line and placed it past Hayashi) we weren't overwhelmed by any means. Kawai was clearly off full match fitness though and was substituted at half time as a result.

The second half chugged along as we managed one effort on goal and never looked in it. While we never looked like getting back into it, only in the last 20 minutes did we really fall to pieces. The goals say it all.

From what got relayed to me, save for a number of understandably angry voices, at the whistle the ground was largely just a morgue of morose silence. Amazing really, but it does suggest most people accept that shit happens, and that this was game 2 of 34.

It took me long enough to update the blog and I don't want to dwell. Away to Lee Min-soo's old team Shonan on Saturday, then home to Kofu in the Nabisco Cup group stage Wednesday afternoon (it's a national holiday). Saturday is the time to put in a decent performance, keep a clean sheet, and for Bare to net his first goal (in the right end). 3-0 to the boys in orange! 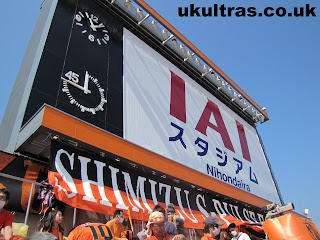 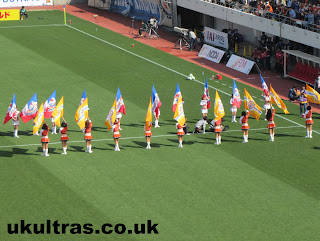 Cheerleaders for the away team??? Only in Japan 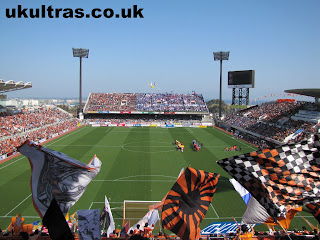 The whole team broke and believe me if I say that people laughed at me and asked me what happened, just to hear me saying that my team was completely outclassed...

But I'll watch all the games that are necessary to see my team win.

Except if we lose to Kofu in the cup, then I think I'll jump through the window.