Crap stadium. Crap performance. Crap home fans. Crap defending. Crap service station on the way back to Shizuoka. An all round complete crapper of a day. 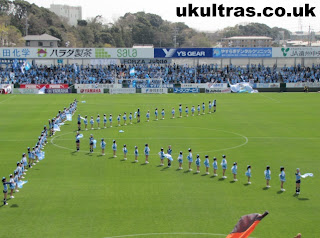 Almost as infuriating as our capitulation was the way the home fans barely seemed bothered. When we beat them by the same scoreline in 2009, there was a party on the terrace with 20 minutes still to go. We kachiloko'd, beer was flying around, we sang their victory song, and generally rubbed their noses in it. Yesterday? Nothing.

So maybe it was only the league cup, but it somehow annoyed me more that they didn't revel in a big derby win. That was left to my Iwata supporting brother (Why does he like Jubilo? In short, he's a twat) who pasted my Facebook full of sky blue nastiness. Something they did do was after each goal move their arms up and down repeatedly in mass banzai-type celebration. It somehow reminded me of the Time Warp, and was equally as camp.

Well, Ishige's freekick was quite good I suppose. Apart from that, pure suicidal defending.

Watched the game. When will our defense stop being placed in the central circle of the field ? It's way too high and we always are being tricked by counter attacks. It's annoying.

Chasing the game, the youngsters pressed way too far up, didn't they. Aaaagh.