Well it's a funny old game. Yep, it really is. But then there comes a point where funny turns to comedy, then comedy turns to complete bloody farce.

At the full time whistle, Nihondaira rang to the sound of warm applause. The massed ranks of supporters rose together as one and gave a heartfelt standing ovation to their team. A team which had just lost a goal lead in the last five minutes and then subsequently the game. Not one single boo. It was a surreally moving experience, but how to explain such a bizarre juxtapositioning? Yuichi Nishimura.

The match started well but rapidly became a shambles; one bad enough to put people off the game. Why would you bother watching a sport when such mismanagement by the man in black sees to it that the game will only end in one outcome?

Straight out the traps, Nishimura, Referee of the Year 2009 and 2010 (seriously!), was eager to show who was in charge. Three yellow card for the visitors in under 25 minutes was then balanced out somewhat by two yellows in ten minutes for Iwashita. The first one was a truly daft handball in the area and hard to argue with, but the second? It was a hard sliding challenge, the Kashiwa man made a huge meal of it (of course), and Iwashita needed a talking to to calm it down, lest he be taking an early bath. Referees are granted the luxury of using their common sense, after all. But, no. The robot in black waves another yellow card and we're down to ten men before half time.

Cue some heroics from Shimizu and within 20 minutes of the restart we're two goals in front. Takahara got his first of the season (it's been coming), and Brosque capitalised on a schoolboy error from Kashiwa to make it three.With ten men we were the better team. Energy and positivity oozing out of every pore, an offence minded substitution in Takagi for Ono, and we were in the ascendancy. Kashiwa looked as much like defending champions as Consadole Sapporo (OK, maybe a little harsh, that), but even with a man advantage they laboured their way forward and looked unlikely to get back into the game. But then the 66th minute rolled around and all hell broke lose.

With the ref's needlessly strict and confrontational performance, the day became a farce. It was a physical, but not a dirty, game and it was not worthy of all the cards. What is it they say? A good referee is a referee you don't notice? Fat chance. This game would have ended with 11 on each side had the man in black any decent man-management skills. And that is my problem with him. The mechanical, arm-to-pocket reaction he has when he sees a foul soon destroys any keenly contested game by removing players from the field, changing the game flow, and ultimately ending the game as a contest.

Yoshida and Wagner tangled by the touch line, the linesman (much closer to the incident that the ref) doesn't signal, but Nishimura spies the handbags between the two. What to do? Both were guilty of losing their cool, so let's have the pair apologise and shake hands, shall we? Cool the situation and prevent any further cards? Maintain the game rather than culling two more players from the field and sending the contest into the realms of tactical farce? No chance. Nishimura steams over, barging into Wagner to force him off pitch (why?!), all the while waving a red card around. Probably realising that a second yellow for only Wagner would be unfair, Yoshida gets one too and it's 9 v 10. (Edit - it was actually a straight red for Wagner.)

Playing with nine men in overbearing humidity was never going to end any other way, and despite a brave effort, the result was decided there and then. You just can't cover a full sized pitch with so few players, and with ten men to our nine Kashiwa must have had 80% possession or more, basically enjoying shooting practice. Perhaps the craziest part is that at 3-4 we nearly equalised twice, with one shot stopped only by some true heroics by Sugeno. Reysol have about as much chance of defending their title this season as Sapporo of staying up, and last year's glory must feel a long way away barely getting a result in overwhelmingly advantageous circumstances.

Another loss, seven games without a win, but three goals scored and we were united at the whistle. United in our collective frustration at the head official. For today was a situation first made difficult, then made impossible, and yet we didn't drop our heads and showed a whole lot of spirit. That's important and didn't go unnoticed or unrecognised.

A roller coaster of a game, but for all the wrong reasons. I don't ever want watch another game with Nishimura in charge. Seriously. It's pointless. If every ref was like him, football as a spectator sport would break down and eventually cease to be. At least he hasn't been selected to referee at the Olympics or anything... Oh.

I'm acutely aware of my vested interested when reporting on S-Pulse, so I was relieved to find a similar opinion on The Rising Sun. Click here to read it. Writing with a heavy orange leaning I may be, but I'm not totally blinded by bias, clearly. ;)

We've had some wretched luck over the last few weeks, we're better than this and we know it. We drop to 12th which is no fun whatsoever, but only six points off an ACL spot. Optimist? Yep. ;) Away to Yokohama in a fortnight, but before that it's Nagoya in the league cup on Wednesday 25th. It's the first leg of the 1/4 final at Nihondaira, kick off 7pm. 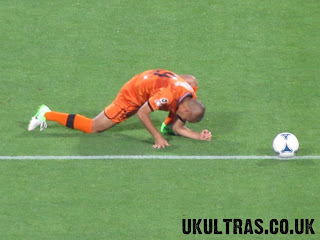 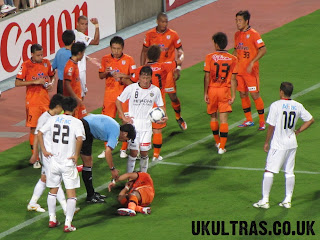 Wagner sees red, so does Yoshida. Why? Fuck knows 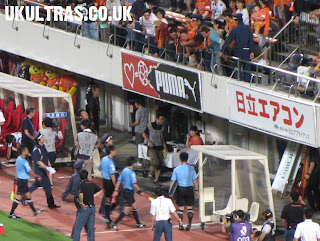 Fury from above. Even the sedate confines of SS Zone is incensed into action
Videos

All the cards. Some of the early ones were valid, no question. It's the later ones where Nishimura needs to calm the hell down, use his damn common sense and stop waving them around so freely.

If you have the time or the inclination, here's 25 minutes of extended highlights.