It's amazing how much better things seem after a nice sit down and a cup of tea. The initial frustration of failing to find the net again shouldn't be dwelt on too strongly. One goal in six games has left us all at our wits' end, and the players too are clearly desperate to break the barren spell.

It's a combination of that desperation and just plain bad luck that saw today draw another blank. At least three times we had chances that on another would have gone in. Nobody is to blame, as some of the football we played had us scything through the visitors, but I could understand the feelings of anti climax on our big 20th anniversary bash.

What I thought was a bit ott was the group of around 20 fans booing the team bus as it left the stadium. I was still hanging around an hour after the full time whistle waiting for a bus (the poor access, especially from Nihondaira after games must put off hundreds of casual punters) and was surprised to see a few people had waited just to boo their team.

We're not playing badly, we're just not scoring goals. We're not conceding either especially and have the joint best defence in the country. A win next week (easier said than done I know - it's against the champions) would see us possibly as high as 4th. Well, for that handful of people booing the team bus, there are 15000+ who aren't, so don't let it get to you, lads.

Right, more to come tomorrow. I'm off out for a beer or two. 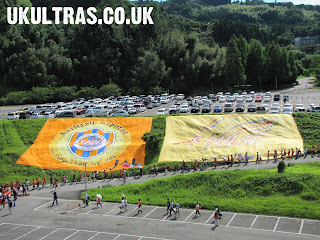 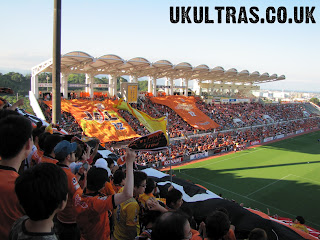 Even the Back Stand got in on the banner action! 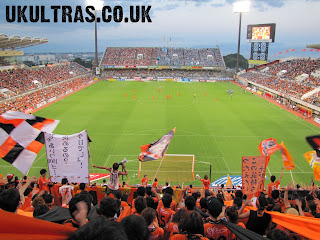 In the thick of the fray
Videos

Skip along to 0:40 for a look at today's choreography. Top effort!