Keeper Kaito has been called up for the national team which is cracking news. Well done, fella. You deserve it.

In other news, there's going to be no match report or update of any substance for Thursday's game until the weekend as I'm off down to Fukuoka tomorrow and leaving my laptop in Shiz. We've sold out nearly four planes on the Shizuoka --> Fukuoka route and I can't bloody wait! Look for me on the box. :)

Finally, in case you're not aware there's an Asian U19 something or other tournament going on right now. Japan played Guam yesterday and this happened: 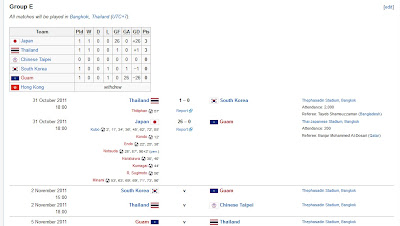 :-D
Not sure if any S-Pulse youth are in there, but whoever Minami plays for must be pretty pleased with that performance. Comes on at half time and scores SEVEN. :)
Posted by Barry at 7:42 pm

As long as there will be a report to look forward to I don't mind waiting :) / Arsenal supporter

Have a nice time while you're down.

I'm hoping for a young Avispa team, might make for a high scoring game hopefully.

Minami played I think once for us last season as a sub. Scored as well:) Away to Kumamoto.