A draw makes only one defeat from our last eight, and you know what? That's pretty good when you look at the opening six games' results. A point yesterday was probably fair, although Kashima always looked the more likely to score. We never really troubled Sogahata in the Kashima goal, but down the other end, Usui played a great game again keeping out the visitors on the two or three times they breached our defences.

Kashima won't be in the bottom half of the table for much longer. They were probably the best team to come to Nihondaira this year and play with a confidence and accomplishment you'd expect from the seven times champions, but I don't think they'll be adding to their title haul for a season or two to come. Regardless, they are a good team and one of the league's better ones and caused us several problems yesterday.

The point takes us up to eighth (before Sunday's games) but only five points off second place so with only a third of the season gone, we have it all to play for and I don't doubt we'll continue to get better. Next up, away in Sendai on Wednesday. The scene of a truly memorable weekend away last November, and a while before that, very nearly sending jubilo to J2, I've been a fan of the club for a while. Sport is sport, so we'll be going to win, but respect to everyone up there for coping and dealing with what has been absolutely unimaginable trauma and hardship.

(Whoops - the Sendai game is not for ten days yet. Before that it's away in Kofu next Sat.)

Courtesy of UKU Yujiro a couple of pictures. Thanks to receiving a much coveted Photo Pulse invite from a friend I got the chance to tread the hallowed turf of Nihondaira before the game. The pitch is a carpet, the view from it at a packed Kop breathtaking, and I was as happy as a 10 year old (which is pretty much where my brain stopping developing when it comes to football). 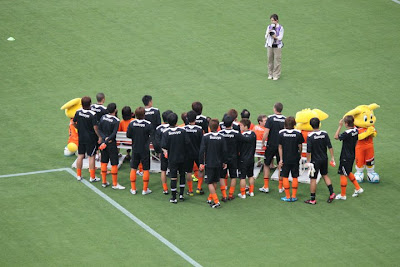 Having a quick chat with Bosnar :) 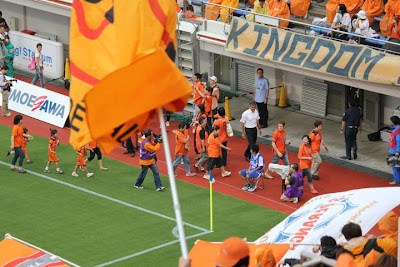 Ghotbi was right behind me! He said hi and it made my day :))

To come tonight. It's Sunday afternoon and I'm off to a cat cafe with the other half. Yes, you heard me. a CAT CAFE. :-D

OK, I'm back from the cats. Here's some Ghotbi comments translated back to English from the Japanese.

"Firstly I want to apologise to our supporters for not being able to to show them the attacking football which we aim to. The first half was the worst we've played all season. We were beaten physically all over the pitch. The referee didn't protect us.

We improved in the second half, especially the last twenty minutes when we created chances to win it. Two points I'm satisfied with are 1, we kept a clean sheet for a second game running, and 2, we shut out the best team in the country. That's a great defensive achievement. Especially our young keeper Usui had a great game."

did they let you in not being a cat? ....or did you have a disguise? A cafe staffed entirely by cats for cats and mad old women. Sounds great.

Staffed by cats? :D If only it was that interesting. Ice coffee and eight not very playful felines. Was not without its charm though. :)

where do you guys sit during the game? Surely I would have noticed a british guy in the kop end?

I'm a bit of a short arse, so easily missed. :D That said, we're always 2nd floor, dead centre right at the back.

ha ..I was there right at the back behind the railing :P during the last game ..but it was my first game at Nihondaira....and i sat on the wrong side at 2F during the first half(dead crowd :P) ..moved to the other end during the 2nd :P

haha - yeah, as you found out, nothing happens down the other end. That's mainly for people who watch the game in peace and quiet.

I'm glad you were able to move down the lively end, although I guess most seats were probably full by that time?

yea it was full. Thats why i had to stand behind the railing :P..it was fun though

Anyways nice site guys..didnt know the songs related to the club as well(except for the Barca like "ole le olala one)..very informative....Cheers!

Baz, you do know I see Ghotbis speech every week on telly in English. You could save yourself a lot of work.

Mind you, translation back adn forward came out well!

Good to hear I'm not totally misquoting him or anything! :D

What time is he on the news? I never seem to catch the sport these days. It's not that much work though, and I enjoy the translation practice.

Shadows, cheers mate, glad you find the site helpful. :) I've been meaning to make a listing for all the lyrics to all our songs but it would take a long time and I've just not had the chance. Maybe this summer I can get it done. :)