After a combination of Google Earth's Street View research and blind luck on the trains I arrived at Kawasaki's Todoroki Stadium in plenty of time for Saturday's early kick off. I wasn't alone, as hundreds of S-Pulse came up for this contest between two teams who will surely be in the upper reaches of the table come December. 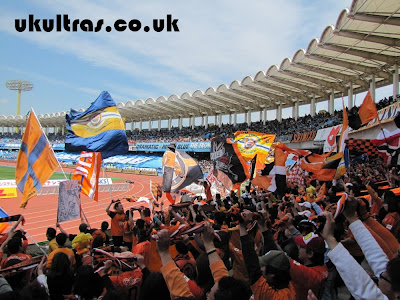 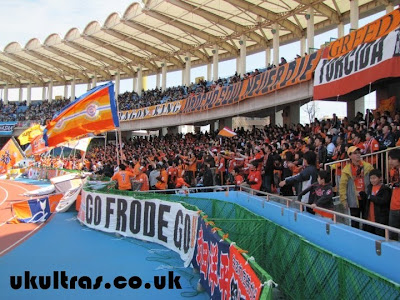 An excellent turn out
I'll be honest, the view from behind the goal was pretty awful. The terracing isn't really steep enough and the added drawback of the running track made it hard to follow play with any certainty. Things seemed better from upstairs, but that was full to overflowing with our travelling army long before kick off. The Todoroki was a nice place to visit and I'd go back, but not to stand where I did this time. When it came to watching the game I was getting so frustrated with the view, I ended up expending most of my energies in just cheering us on. Anyway, moan over. 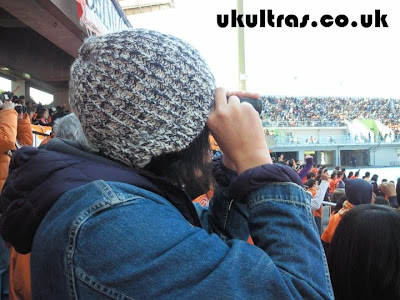 The view behind the goal required binoculars

We had something of a makeshift starting line up. With Iwashita out for a month we had a re-jigged back line with Hiraoka and Tsujio both starting, but things held together well. We also had Hyodo playing up front in place of Johnsen. The Norwegian didn't make an appearance until the 70th minute, with Hyodo then (mercifully) dropping back into his regular place in the centre of the park.

It took a while for the chances to start coming, and Fujimoto drew a fine save out of the Kawasaki keeper from a free kick, but even when both teams found their shooting boots, real goal scoring chances were still pretty few and far between. Kawasaki's Renatinho was diving around at every opportunity and I'm sad to report the referee was getting played hook, line and sinker. He even succeeded in getting a yellow card awarded to Bosnar after launching himself in the air at the Aussie's challenge. Oh, well. Such is life, and players will keep trying it all the time the refs can't do their jobs properly.

Despite the early yellow, Bosnar wasn't put off his game and was instrumental in our defence keeping a third clean sheet of the season. The big man had an excellent game. Ono too, despite getting several knocks throughout the game, was different class and everything was channelled though him, though he picked up another yellow. He does like a a good chat with the ref, of that we've come to see. If he can remain injury free he's going to have a huge say in where we end up at the end of the year. 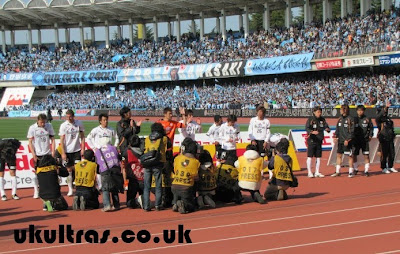 The biggest worry from the game was the lack of real fire power we displayed. Johnsen was only used as a sub and we missed his presence. If it's just a one off remains to be seen, and his ability (or not) to start games could prove a bit of a hindrance this year. We don't lack back up in strikers, but none of Hara, Nagai or Omae have the height of the big fella.

The game ebbed and flowed, with each team trying hard to carve routes through each other. Not a great deal of success was had, and our one or two shooting chances were blasted wide (Hyodo and Johnsen, and Ito at the death). As the clock started ticking down things seemed to kick up a notch as both teams went for the killer punch, but nothing was doing and the whistle went at 0-0.

So all told, a draw was probably fair, and a draw away at Kawasaki was no bad result. It certainly didn't leave me spitting fire like last year's injury time free kick dodgyness. We're proving a hard team to score against which is a very good thing. Next up is Shonan Bellmare in the Nabisco Cup on Wednesday in a chance to get our cup campaign off to a winning start.
Videos

The final three minutes from a personal cam:

Our travelling hordes did us proud as ever:

How did you enjoy your trip to Todoroki?

Not a classic by the sounds of it. Quite pleased I opted not to set the alarm for 4am to watch online.

I've not been able to track down any clips since, so I look forward to hearing what you made of the game.

You're right about Renatinho...but we still love him. As far as I'm concerned, it's up to the officials to stamp out his kind of play-acting. The ref in the 4-0 Yokohama game just ignored him (even on the few occasions when it looked like he may actually have been fouled) - I thought this would set the trend.

Thanks for the comment. :) Yeah, I had a good day out and always love adding stadiums to my "visited" list. The ground itself I like; it's easy to get to and away from, and the toilets were huge - excellent stuff at half time!!

But as a football venue the view from behind the goal was pretty hard going. I'm certainly behind any campaign for a new home for your boys!

Yeah, Renatinho is a decent player for sure, but that makes his diving all the more frustrating. he doesn't need to do it. You're right though, it's up to the refs to do their jobs...