Barry writes:
In a qualifier for 2011's Asian Cup, S-Pulse legend Shinji Okazaki scored a hat-trick as the national team brushed aside Hong Kong 6-0. Tonight's haul brings Shinji's international goals up to eleven in seventeen games, and nicely marks the anniversary of his first international cap one year ago against the UAE. 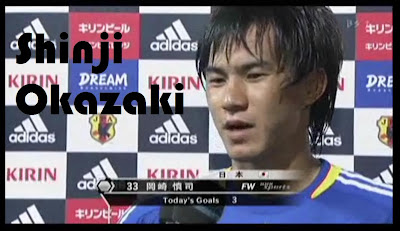 Legend
The game was held at Nihondaira, Okachan's home turf, and a sold out crowd roared the Samurai Blues on to an easy victory. For full details of Japan's 2011 Asian Cup qualifying campaign, and the other goal scorers from tonight, click here.

Japan have two more games coming up, with Saturday's Kirin Cup game against Scotland sure to pose a harder test than Hong Kong. Best of luck, Shinji, and remember to keep those scoring boots on for the final six games of the season!