Half time: 1-0 down to a dodgy penalty. Haraguchi had already fallen half over before he hit Paulo's legs. Well played, you cheating scumbag.

Full time: 2-1 to Urawa. Had the penalty not come from the 18 year old Haraguchi tripping over his own feet, I would say it was probably a fair result. 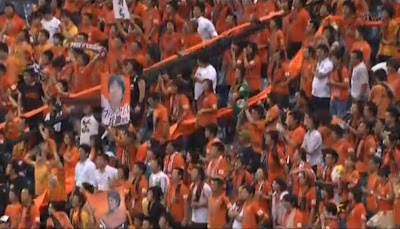 As usual, for long periods all I could hear was the S-Pulse fans
Dodgy penalty for the home team saw them one up at half time, but they certainly had the better of it in the first 45. In the second half we got one back through Edamura before a cracking shot from Mr. Handsome Tulio came back off the bar, only for Edmilson to head it home (completely taking out Iwashita in the process - wish we'd had the same ref who penalised a shoulder barge the other week...) .

We went close to an equaliser through Okazaki which needed a last ditch block from Abe, a Jungo free kick which brought a fingertip save from Yamagishi, and an Iwashita header from one of our six corner kicks (more than the home team) which needed an excellent one hand save to deny us.

Well, it's always a struggle playing against dirty opponents, but Edamura's absolute beauty just after the restart means a 1-0 win on the 29th will be enough to see us through. That said, a draw is no good, and even a win higher than 2-1 of a one goal margin won't be enough (3-2 / 4-3 etc), so all told, it's not a great result tonight.

Ah, well, sod it. We'd have had to have gone into the second leg looking for a win anyway, and it could be worse - Forgetting Nagoya's capitulation tonight for a minute, Gamba got done 3-1 at home. This means they need to win three nil away to save their rapidly disintegrating season. Looking at the other 1/4 final first leg results, out of the four teams that lost, we're in by far the best position. See below for more info.

Click here for a round up of the other results in the 1/4 final first leg.
Posted by Barry at 8:16 pm

Barry, think about politics as a future career - you are great at creating positive spin!