All football fans occasionally have times where they wonder why they bother. You can only put up with a certain number of dreary goal-less draws before you feel your commitment start to waver. The effort a fan puts in over years of trudging off to stadiums far and wide is rarely repaid by games of pulsating, edge-of-your-seat excitement. But every now and again, there comes a match. A match which reminds you why you love the game. Today was just such an occasion.

Yamagata Fans Revel in a Famous Victory
New boys Montedio Yamagata made their first ever top flight appearance down Shizuoka way against Jubilo Iwata - three times J1 champions. A game almost universally predicted as a home win, as I left my flat into the bitterly cold winds whipping in from Suruga Bay, I almost had second thoughts. Almost, but not quite. And I'm so glad I didn't.

By no means a work of art, the game had guts. The game had fight. And the game had goals. Eight, yep, that's right, eight of 'em. From Gilsinho's theatrical dive which gave Jubilo an undeserved penalty on 17 minutes, to the two goals for Yamagata right at the end which capped their dream start to J1 life, the game was a raw demonstration of the spirit of the underdog.

Yamagata took the game to Jubilo, even after they had suffered the early injustice of that penalty. They turned it round towards the end of the first half with two goals to go in at the break with the lead. Early in the second half, Yamagata should have gone 3-1 up when Hasegawa was through on the keeper, but he blew it when he tried a cheeky lob. Not long after that, Gilsinho made it all square after a period of sustained Jubilo pressure, but from the 75th minute in, the visitors ran absolute riot through the hapless home team. 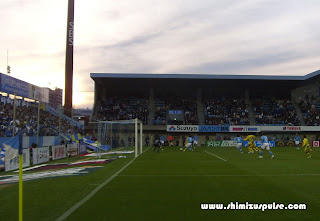 The ball is played in to the the advancing Hasegawa (15) who made it 3-2
The complete inability to deal with the height of Hasegawa and Leonard gave Montedio an open invitation to practice their finishing, and more often than not they took it. Witness for yourself the fifth goal here.

The travelling support (who, by the time they made it home, had covered a cool 700 miles) were in wonderland, and I, as an S-Pulse fan behind enemy lines, just sat back and let it all wash over me. The J. League's been gone too long, and in the opening week I was lucky enough to witness something truly memorable - Jubilo getting hammered, annihilated, destroyed at home by a team many tip to head straight back to J2. Going by today, there's only one team likely to end the season relegated. Last year's play off survival may yet prove to have been a mere stay of execution for the blue half of Shizuoka!

It was a game which, for very different reasons, will go down in history for both teams. All I want to say is thank you and well done to Yamagata - I went along merely to get a football fix prior to next week's game with Marinos, but way more than that, you gave me a hell of a spectacle to enjoy. It was one of those games you come away from still buzzing and remembering just why you love the game so much. The long-faced Jubilo fans who streamed home long before the final whistle probably have a different opinion, though... :-D 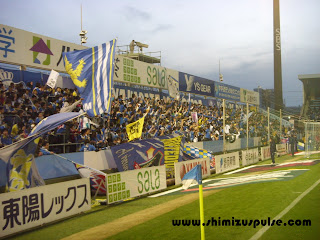 Montedio's Travelling Hordes
There was no shortage of goals in the other Saturday games, either. Fellow promotees Hiroshima also battered their opponents, and Niigata put in four away from home to contribute to the 31 goal bonanza.

had to chuckle at that result. nice to see reds lose on the telly too. Their defence looked pretty loose!

Up the s-pulse tomorrow, and keep up the good work mate.

Cheers fella! This is one game which will live in memory for years to come, no doubt about that!