And there was me talking about a nice, low key game... The only thing low about tonight was the crowd. 4214 rattled around inside Nihondaira as one of the most open games of the season unfolded with 26 shots between the two teams, several rebounds off the woodwork and countless near misses. 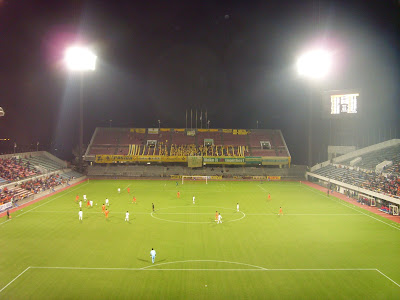 To be fair to JEF, the following they brought down for a game of little importance to them was pretty good. They have far bigger fish to fry, and as their fans continued to bounce around even after the final whistle, it was clear the Emperor's Cup comes nowhere close to J1 survival. The semi-reserve team they put out also bore testament to that.

But forgetting all that, the game was non-stop end to end stuff, and how we went into stoppage time still goal-less was anyone's guess. Both teams had had the ball in the net with each ruled out for offside. For us Okazaki had headed home after a thunderbolt from sub Omae Genki came back off the bar, but the flag was up.

So as the ref had the whistle in his mouth, extra time was looming, and everyone started wondering what time they would get home, Okazaki broke free, was pushed wide by the keeper, almost impossibly wide, but under pressure from the JEF defender he somehow got to the ball inches from the touchline and turned it in the from the tightest of tight angles. Have a look here to get some idea of how acute the angle was.

The place erupted, I now have a horribly painful case of whiplash as my skeleton attempted to exit my body with joy, and for two minutes, the pain of last Saturday was forgotten. The goal had been coming all game and the fact it meant we avoided 30 extra minutes I don't think anyone wanted, meant it was not only elation, but also a decent amount of relief, which washed over 'Daira.

It was the last kick of the game, and never has a 94th minute stoppage time winner been more deserved. Next up Antlers for the 5th time this season. November 15th.