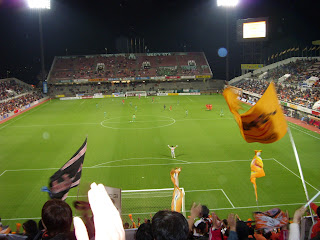 Moments after goal number four (or was it number five?)

It was a special night at Fortress Nihondara as a rampant S-Pulse side ran riot over hapless Verdy. Coming off the back of one of the team's worst ever starts to a season, S-Pulse's confidence was at a low and pressure from supporters to turn things around was immense. Things hadn't been running well thus far, but the Nabisco Cup is always a good opportunity to rest your best players and tinker with those on the fringes as you try to find the perfect formula.

So it was with our line up, with a number of first teamers rested or moved to the bench for the visit of the J. League's most nomadic (and schizophrenic given how many times they've changed their name) of teams. S-Pa's nightmarish start to the season was temporarily forgotten as we proceeded to give the visitors a lesson in the game of football. 3-0 by the break, it was 5-0 at full time, and the bewildered Verdy were lucky to get nil. Had our strikers been more interested or bothered, it could well have been double figures. As the midweek league cup mini-crowd partied after the full time whistle, and as Palchan cartwheeled his way around the penalty area, the hundred or so travelling Verdy fans (had they come down from Kawasaki, or did their supporters move to Tokyo when the team did?) trudged dejectedly down to the bottom tier of the away stand to berate their hopeless heroes.

The result leaves The 'Pulse realistically only needing four more points from the remaining three games to secure our way out of the group stage. Next up are local toe-rags Jubilo Iwata on Sunday May 25th, and as the Nabisco Cup goes, there's going to be a halfway decent crowd packed into 'Daira. Having lost only one derby from ten, we're looking solid enough favourites to see off Jubilo and as good as seal our progress to round two. That's in the future - for now we'll remember the goals as they flowed freely into the Verdy net, we'll slightly rue the fact we could have had a cricket score if we'd been trying harder, and we'll look forward to doing much the same against Jubilo on Sunday. :)

(In other far less interesting news, Verdy turned us over 4-1 today. The match was played out as 11000 people rattled around inside the 50000 seater, windswept souless bowl that is the Ajinomoto Stadium. S-Pulse triumph 6-4 on aggregate. :-D )
Posted by Barry at 9:30 pm