Well, here we go again! With the recent 1-1 draw still fresh in everyone's memories, this coming Sunday we get to do it all again as two teams once again battle it out for the crown of Kings of Shizuoka: Shimizu S-Pulse versus Jubilo Iwata. This time the backstory happens to be the 4th game of the Nabisco Cup group stage. The Nabisco is the J. League's own league cup, and traditionally attracts crowds well below those of the league, but with everything to play for, one of our biggest ever league cup gates will cram into Nihondaira for Jubilo's second visit of the season. For whatever reason, it's yet another Sunday 1pm kick off. I may even start a petition about these for next season - noone should be forced to rise before 10am of a Sunday, even for the footer.

Jubilo won't be relishing their chances given they've only managed one win from the last ten derby day meetings, but S-Pa are without both Ichikawa and Teru through injury, both of which will hit the team hard (not to mention Okazaki, Honda and Aoyama who are all away on international duty). That said, Ichikawa didn't feature in two of our previous cup games, but Teru's presence will be sorely missed. Will this give like-for-like player Marcos Paulo his first opportunity to shine in the first team? So far only making the reserves, and with rumours flying around of discontent behind the scenes, who knows if we'll ever see the ex-Brazilian international grace Nihondaira?

Either way, we're going to miss Teru's influence. He'll be back in two weeks, but Ichikawa won't be seeing action for six - the mid-season Olympic break could not have been better timed! It will also give Kenta some much needed time to assess our horrific start to the season. OK, it's not been all that bad when looked at objectively, and we're only five points off 4th place (Reysol who we took apart with clinical efficiency earlier in the month, are sitting in 4th, which speaks volumes about the randomness of this season), but defeats like those at Albirex and Verdy are simply not acceptable for either the club or it's fans. If we'll be seeing some transfer action over the summer, or if wonderboy Genki Omae will be making his J. League debut any time soon remains to be seen...

So, anyway, yeah, back to the point - the League Cup. Here's how things currently stand:

Clearly in the driving seat, and with the 5-0 spanking of Verdy giving us a huge goal difference advantage, a win could put us through and Jubilo out. Three points on Sunday plus Verdy beating Tokyo, and we'd be in round two barring a goal difference disaster in the final two games. But lets not get ahead of ourselves - we're only half way through the group stage and this season has been nothing if not erratic! With a refreshingly big league cup crowd in attendance, it would be rude not to win our sixth derby from ten and leave Jubilo with just a relegation battle to worry about. My prediction? Not nearly as bullish as last time, but a decent enough 2-0 win for the mighty Oranges - just wait and see. :) A six foot pole (top left) hurled into the Gamba supporters
In other news: The J. League rules out any punishment for either Gamba or Urawa beyond financial. Good move - way to bottle it. When the next incident happens - and it will, there's a history of intermittent crowd violence in the J. League going back years - can we expect the same worthless punishments from those at the top? Gamba have banned the Black and Blue Squad supporters group, apparently those at the centre of any hooliganism, but Urawa are not able to return the gesture. The reds who destroyed the fence and attempted to attack the visitors were in the more moderate area of Saitama Stadium, and not part of any organised fan group. It can only make you wonder what the nutters down the home end would have done if a water balloon (a water balloon - quick, call the paramedics!!!) had hit a child near them. 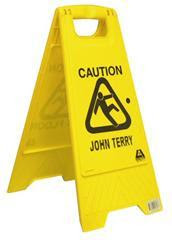 In other news: Manchester United beat Chelsea in the Champions League Final.

It's a sorry state of affairs when the biggest club competition in the world can effectively be decided by one man slipping over. I'll never understand the fascination governing bodies have with penalty shoot outs. What's wrong with at least having one replay before resorting to the coin toss solution? Think of all the money to be made in having a SECOND final! PK shoot outs, especially those in finals, just serve to chip away at the credibility of a competition and its subsequent winners. Still, maybe I just don't like pens because England always lose at them...

In yet other news: The domain www.shimizuspulse.com was sitting sadly vacant, and so has since been snapped up by a certain fan blog. For copyright reasons I guess we should state that the website is named after Shimizu's Pulse (my friend Mr. Shimizu who has a very interesting pulse) and not after a certain J. League team who wear bright orange. :) The URL should be active in a day or two, and will point here. 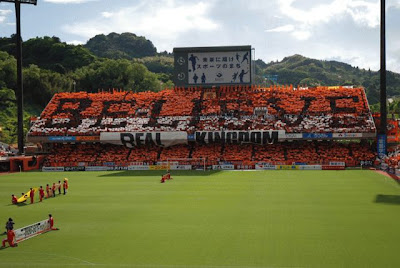 We kept Verdy down in our first Derby match and we'll do it again on Sunday.

As much as I'd like to see you put Verdy in their place after they had the nerve to beat us last week, a win for them and a win for us on Sunday would put us through! I may even come up to the Matsumoto - I'm not a fan of the Ajista, but the Matsumoto looks like a really decent football ground, not a lot unlike Nihondaira!

Oh? If you're gonna come to the Matsumoto game lemme know - I have a ticket (season ticket holder, no choice) but I dunno about going up there - the bus is 5-7 hours each way >_< And the train is about 15,000 yen round trip. Why they couldn't just let us host at Kokuritsu I have no idea.