With Iwata's defeat away to Tosu on Sunday their relegation to J2 was finally confirmed.

This clip just about sums it up. But why? I'm not from Shizuoka, I've only been an S-Pulse fan for 9 years, with all of Jubilo's title winning seasons coming before I ever set foot in a J. League stadium. Why should I give a hoot about Iwata going down? Well, that's just how football works, isn't it? As a Brighton fan in the mid 90s I was well versed on the rivalry with Crystal Palace long before I ever saw the Albion take them on. We had to drag ourselves out of the 4th tier, then onwards beyond the 3rd, before finally we had a shot at them. We lost 5-0. Selhurst Park's announcer congratulated the home fans well before the game was even over. Now I truly had reason to hate the bastards.

Not long after that I moved to Shizuoka, and adopted the nearby Shimizu as my J. Team. Deciding Jubilo Iwata were deadly rivals may have initially been tongue-in-cheek, but I would soon be provided genuine grounds. This was 2003, and S-Pulse were finishing lower-midtable just as the Yamaha-backed Jubilo added an Emperor's Cup to 2002's J1 title. Not only had fate bestowed on me a distinctly average team, it placed Jubilo just down the road, winning silverware left, right and centre. Within days of purchasing a bright orange JAL-sponsored shirt, it was helpfully confirmed to me by a local that it was indeed Jubilo who were Shizuoka's premier club.

It did somewhat wrangle, and I cursed my luck it wasn't Shimizu I could expect to see dancing with trophies, but being new to the J. League, I let it go. It was time to concentrate on my new-found team. After a year cutting my teeth at Nihondaira Stadium I was set for my first derby day; away, no less. Having no history with the fixture, though greatly fired up, I felt like an observer. Sitting not within the main throng of S-Pulse fans but in the side stand, I got a perfect view when the home end unveiled their opening shot across Shimizu's bow. 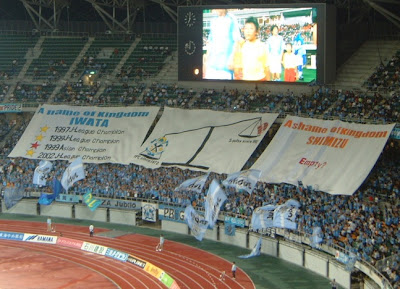 Until that point an overriding impression of J. League culture had been the lack of banter, mocking, and honest to goodness shit stirring. Japanese fans were far too polite a breed to engage in trash talking and abuse. Granted that was the one thing I missed the most from England, but I was settling into the family oriented atmosphere comfortably, and was ready for a good-natured derby with lashings of mutual respect. So when those three huge flags were lowered I was genuinely taken aback. It was a clever display for sure, and great to finally see some real rivalry, but at the same time I was affronted. Iwata were clearly the dominant force in the area. They knew it. Shimizu knew it. Japan knew it. S-Pulse, even at their peak years earlier, hadn't come close to Iwata's accomplishments. Much less now, as they struggled at the wrong end of the table.

There was no questioning Jubilo's superiority, and I was comfortable with that. Given my experience thus far, I thought the fact would pass unmentioned. I thought wrong. Iwata were not that classy. No, they wanted to remind us exactly where our place was. They wanted to rub our faces in it. They were saying, We've Got it ALL, You've Got NOTHING, We OWN You and Don't You Dare Forget It. Bitches. I'd read about the vast banner unveiled at Nihondaira in '99 proclaiming the title Iwata won at Shimizu's expense. Brutally tactless perhaps, but the league was still only six years old. It was no doubt meant merely to congratulate their own team, not to smirk at the sobbing home fans. That one I could forgive. This, and another banner rejoicing in Shimizu's potential relegation, were different.

I was shaken from a slumber of complacency brought on by too much nice family football fun. So this is how you want to play it, Jubilo? You want to kick us while we're down? To twist the knife? In hindsight this first impression couldn't have been better. Iwata could barely have done more to sow the seeds of distaste. The angry roar of disapproval rising from the away end mirrored my own reaction, but for those behind the south goal the insult was felt far more keenly. The visitor section was populated with many who had witnessed first hand Iwata's snatching of the '99 championship from Shimizu's grasp. Add to that watching your neighbours claim two more league titles, two domestic cups and the Asian version of the Champion's League, and S-Pulse fans had endured more than most. Now that inferiority was being openly mocked.

Iwata remain to this day arguably second only behind Kashima as the J. League's most successful team, and in '03 their record breaking accomplishments were still fresh in the memory. What I saw at Ecopa that day felt like self satisfied giants sneering at the minnows from atop their throne. As an underdog-trumpeting Englishman my revulsion of Iwata was cemented there and then. Mercifully, over the coming seasons their power waned. A 5-1 demolition of Iwata in 2009 was a night no S-Pulse fan will ever forget. It drew an emphatic line under their previously unquestionable control of Shizuoka.

Self confident sky blue supporter displays grew fewer and further between, until ceasing altogether. 2011 saw an unwelcome replacement when a small group of Iwata fans personally insulted Shimizu's new manager. Understandable, if not excusable, crowd disturbances ensued. The rivalry still had teeth, but it wasn't until 2013, when Jubilo were struggling to stay in J1, that Shimizu supporters could finally have their payback.

The derby which took place at the Yamaha Stadium in October 2013, in which S-Pulse all but sealed Iwata’s relegation, will be remembered as one of the most frenetic and fiercely contested games of the season. The banners and flags prepared by Shimizu fans to throw salt by the handful into Iwata's gaping wounds are destined to leave a lasting legacy. Messages ranged from light hearted jibes such as J2bilo, or Let’s Meet Again Someday, to the less subtle Survival? You must be joking! The most direct included a torn and burnt Iwata flag scrawled with J2. In light of the tie's history, there was never going to any other reaction from the away end. Years of being second best is one thing. Having that fact shoved down your throat breeds a deep, brooding anger which aches for an outlet. Nobody should have been surprised at this cathartic, deafening orange roar. It had been a decade in the making. 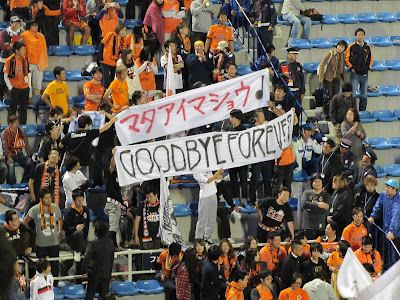 It was payback, many years coming

Such a joyous display shocked many Iwata fans, although presumably not those who verbally abused the Shimizu team and staff upon arrival (this YouTube account has since been deleted). However, large numbers of the home crowd had been following their team only since after the glory days had faded. For those, the vitriol directed at their club was shocking, but it was merely a long awaited revenge, impeccably executed. Mortified at the outpouring of carivalesque delight at their host's hardships, Shimizu's top brass apologised to their Iwata counterparts by dishing out bans to large number of their own supporters.

Draconian controls on banners and flags at all future games followed. This mirrored the over reaction of Iwata's management to that one lone slanderous banner in 2011. With both clubs now controlling how fans express themselves, and wielding bans for any who step out of line, the Shizuoka Derby is unlikely to ever match the fiery atmospheres of recent years. More probable is the tie's carefully controlled evolution into a family fun day, where displays of passion likely to cause hurt feelings will no longer be a concern. For a rivalry which had established itself as one of Asia's finest, this is a tragedy.

What will become of this fantastic fixture remains to be seen, but for now we can celebrate the last twenty years of Jubilo Iwata versus Shimizu S-Pulse. In two short decades the tie grew from nothing to containing all the requisite ingredients of an enthralling derby. The current chapter came to a close with Iwata's relegation, but with it Shimizu fans finally claimed their retribution. By this point I had long since ditched my role of spectator looking in, very much being a part of the cavorting orange masses rejoicing in Iwata's downfall. When their fate was sealed the following fixture, I remembered that day Jubilo made an enemy of me, and smiled. It can take years, but you really do reap what you sow.

Until Iwata return to the top flight and beat us once more, that smile won't fade. Will I miss the derby? No. Each season Iwata spend in J2 is simply more ammunition for Shimizu. Inevitably they'll be back one day. Inevitably they'll someday be the better team again and, offensively patronising supporter controls notwithstanding, they'll delight in rubbing our noses in it. That's football, and I wouldn't have it any other way. Until then, there's only one team in Shizuoka, and it certainly ain't Jubilo Iwata.
Posted by Barry at 10:44 pm

Hmm, that means no more derbies. I liked the derbies. Oh well.

Sure they'll be back soon enough, then the derby will be even more tasty!