With goals from Bosnar (2!) and, of course, Takahara, we beat Urawa this evening. Everything will come Monday afternoon because I'm in a hotel in Yamanashi right now getting an early night ahead of my first half marathon. All I will say is GET IN!!! S-PULSE, YOU ARE BLOODY BRILLIANT!!! :))))))

Well, I never got round to writing much more about this, but in summary it was a good result away from home with a fantastic second goal. A perfect diving header from Takahara after an equally perfect Genki cross. Naohiro is in great shape and if he keeps this up the doubters will be stuffed full of humble pie come December. When you consider he's only been starting as centre forward for the past five games, his recent haul is even more impressive.

It's been a little while, but we all know what he can do, and Bosnar's two free kicks were just unstoppable. Especially his second which must have been moving at some speed. Home to Kawasaki tomorrow under the lights. Looking forward to it. :)

We were excellently organised and could control the game from start to finish. It's fantastic to give the fans a victory with some special goals. We showed our character after conceding to grab a third and wrap up the win.

Let's Talk About ME

If I can be self indulgent for a second, this is what I got up to this weekend (hence the delayed update to these pages). 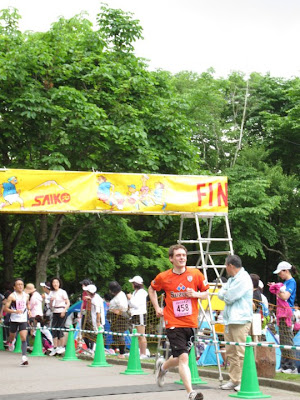 13 miles before midday on a Sunday? Not something I'll be making a habit of, but might just do another half marathon in the not too distant future. :) I saw a couple of FC Tokyo shirts, a JEF United one and also an Omiya top. I mean to say I saw them as I was leaving them on a cloud of orange DUST. Go S-Pulse!

After finished watching the two goals from Bosnar, I have one conclusion. Bosnar.............. is NON-HUMAN!

Hahaha - simply awesome freekicks, and twice in once game!!